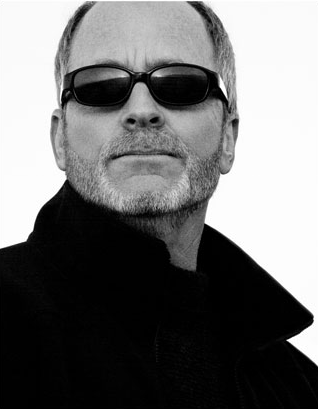 “It’s important for young photographers to create their unique style; their own look. People try to follow the lead of other photographers and it’s so difficult to create something new,” says Greg Gorman, celebrated celebrity photographer. He offers good advice because he himself has risen to an almost exalted status in the starry world of Hollywood portrait photography. And, it’s been a heck of a life’s journey to his new exhibit, Greg Gorman: A Distinct Vision 1970-2010, a 200 piece retrospective exhibition of four decades of photography that has debuted very recently at the Decorative Arts Center in Houston, running from April 27 through June 3.

This not-to-miss opportunity showcases Gorman’s illustrious and varied career and really chronicles not only his successes, but also his myriad subjects. When I caught up with Gorman recently, he was in a terrific mood. “I had no preconceived notions about Houston since I had never been here before, and I am having a blast. Wow. I even went bass fishing this morning at a nearby private lake,” Gorman offers. Gorman may not have had exposure to Houston, or Dallas, for that matter, but he has friends in other major Texas cities including Austin and San Antonio. These days, it appears, Houston and Texas has welcomed him with open arms, along with his show.

One of those Texans is our mutual dear friend, Houstonian philanthropist and tireless fundraiser Carolyn Farb. She muses, “His exhibition is extraordinary; no one has his eye. He captures more than the surface when he is photographing a subject… he reaches into the soul of the person and that’s what makes his photographs so exquisitely timeless and memorable. The way he works and understands light is magical.” She goes on to say, “I went to hear him speak, which I have never had the privilege of doing before - what a great and generous mentor he is to future artists. He mentioned one of his other passions, and that is his love of wine – the whole process. He reminds me of a magnificent blend that intensifies in what it is with time.”

“I adore Carolyn,” responds Gorman who has photographed her over the years. “We met over 20 years ago at a dinner after a show I did with [fellow photographers] George Hurrell and Doug Kirkland – she was sharing her latest cause at the time with me, Neurofibromatosis, which is like what is seen in The Elephant Manmovie," Gorman recounts. “Carolyn said, ‘I’d love you to meet Reggie Bipps’ [who suffers from the debilitating disease] and of course, I did and we’ve all been friends ever since. As an openly gay man, I have devoted much of time and money to AIDS charities, so this was really different for me then. In fact I’ve seen Reggie several times already while I have been here. Plus, you know, too, that Carolyn is so passionate – that is all that really matters – about her art and philanthropic work.”

That sense of heart and spirit can be seen in photographs from even Gorman’s earliest work. In fact, you’d think that Gorman has photographed every famous actor, or at least most of them including Ben Affleck, Alec Baldwin, Antonio Banderas, Kim Basinger, Marlon Brando, Pierce Brosnan, Kevin Costner, Tom Cruise, Bette Davis, Robert De Niro, Johnny Depp, Leonardo Di Caprio, Andy Garcia, Sir Anthony Hopkins, Dustin Hoffman, Sophia Loren, Al Pacino, Barbra Streisand, Kiera Knightley and John Travolta. And, that’s just a fraction of his repertoire for his youthful age of 62. I remember an Interview magazine in the mid 1980’s where Gorman took the stars of that era and dressed and propped them out as if they were in the 1940’s studio system. It was pure magic that he created with his eye for a lush narrative. Many of them were in his book of photos, Greg Gorman Volume I which sat on my coffee table for years after its release.

His work ranges from the artistic to the commercial, yet both are artful, like his advertising campaigns, magazine layouts, and fine art work. Let’s face it, Gorman has climbed to the top of his field and stayed there a long time. But that started in another era.

“My parents divorced when I was really young,” he confides. “So I would visit my father, who lived in LA, before I moved there to go to USC Film School. I didn’t pursue film because there were too many decisions to make, so I took my camera and shot portraits. In fact, I’d earn $35 a day for six to seven rolls of film, which included film & processing. Look, I started shooting in the 1960’s and eventually did the shoots with people I wanted to do. People like Streisand, Bowie, and for films like Tootsie and The Big Chill.”

He’s revealing, but he is a great secret keeper, too. When I ask him about his clients – favorites, actually, he wouldn’t elaborate, but said that shooting in black and white has been the kind of photographs he really loves most. When I asked him about a celebrity he was surprised by, he immediately answered. “Michael Douglas. I didn’t expect him to be the way he was and I was pleasantly surprised. I wish I’d left some of the stars as a fantasy.”

Gorman who now splits his time in Los Angeles, a winery in Mendocino, and his travels teaching around the world, is happy with how his career is being presented in Houston these days. “This is a reinterpretation of a lot of my stuff from the 80’s to early 2000’s,” says Gorman.

"It’s my greatest hits. My latest book is In Their Youth and I also have some new work in show as well. Much of it is on large contact sheets – large prints scanned digitally – about 40 x 50 inches. It’s everything - male and female nudes, a shot of Phillp Johnson, Jeff Koontz, David Hockney, Leo Di Caprio when he was younger, Cirque du Soliel, and newcomer Alex Pettyfer. And, there’s a hand full of gelatin prints and even an Iris print. It’s the history of my life.”

When I ask Gorman how important his environment has been to his photographs, he shares “I’m happy to be working back in my home and working one-on-one shooting people – I’m doing what I want now. I'm printing my own work and back in control of interpreting my vision. I’m seeing things in my pictures from old days that I didn’t see then.”

(Corner of Woodway and Sage Blvd.)