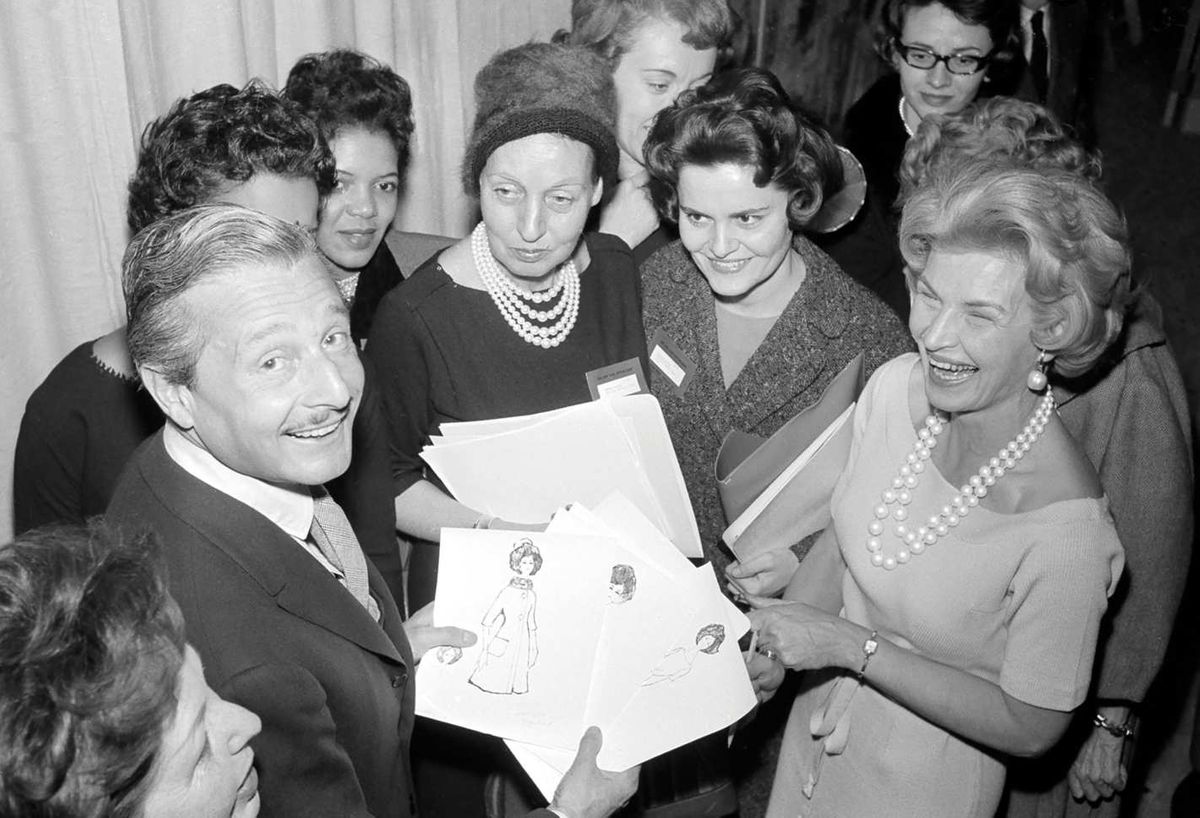 June 18, 2019 7am By Gordon Kendall Photography courtesy of Doyle Auctions

The scene: the gated Long Island mansion…a Gramercy Park townhouse…and, of course, a small fleet of luxury cars to go with them. If living well is, indeed, the best revenge, then the lifestyle of the late fashion designer Oleg Cassini is a case study in how it should be done. Cut to: Doyle Auctions is counting on those who live well…or just look like they do…and fashion aficionados to be lured to the June 27th auction of the contents of the late designer’s Oyster Bay estate, Moorelands, ready to bid. Likely, there will be the curious who will want to see firsthand, perhaps own, even a small part of his world and, by doing so, be even more enchanted by the mystique of the man himself.

His name was Oleg Aleksandrovich Loiewski, the son of a Russian countess, from whom he took the name Count Oleg Cassini. He died at age 92 in 2006 and matters of his estate remain uncertain. Yet, generations of latter-day mall and discount shoppers may know Cassini from the great many products bearing his name, as he licensed practically an entire department store worth of fragrances, clothing, accessories, housewares, and other items, that were eponymous. The Jackie generation, however, will know him as the man who dressed Camelot’s famous queen, Jacqueline Kennedy. As such, the client-designer duo were the ultimate fashion “influencers” in the United States of the early 1960s. From couture image maker to off-the-rack impresario, Cassini is generally acknowledged to have been a business success in both worlds. He is also acknowledged to have done all of it with…such style.

In My Own Fashion is Cassini’s 1987 appropriately named autobiography and in it he stated the cinema-esque European world he came from, with: a tuxedo, a tennis racquet, and talent. The usually tan, almost always trim Cassini parleyed those and the hereditary title of Count, with his own admitted luck, drive, determination, and, it must be said, considerable charm with the ladies to build his fashion empire. It helped that he was photogenic, as were the many woman famous women with whom he dressed, or was romantically linked throughout his life. These included, of course, Jackie Kennedy, who arguably established the platform from which his later career in licensing flourished. Marilyn Monroe and Grace Kelly, were other fashion icons with whom he was associated after his 1941 marriage to (yet another) actress, Gene Tierney.

The true stories behind all his romances may never be fully known. His fashion legacy as among the very first American fashion designer to license his name continues into today. The final outcome of his estate remains uncertain over a decade after his death, thanks to warring family factions. It, however, fair to say the Doyle auction will certainly be a barometer of Oleg Cassini’s enduring legend as a tastemaker.

Prospective bidders have an opportunity to peruse Cassini’s version of The Good Life. The antique suits of armor, French and English furniture and a plethora of Cassini’s household, personal, and apparel items, many of which bear the scrawling signature of the designer; he used and wore his own products. The fashion memorabilia available include some Cassini-designed dresses; however, the ephemera items of letters from his most famous client (and her sister, Princess Lee Radizwill), workroom and production notes, tear sheets, and annotated photographs. These provide insight into the relationship between designer and Jackie Kennedy. Both were aware of the power of image and neither left to chance how much she…and in turn he…would be scrutinized, praised, or criticized for any and all decisions made about her apparel, including their selection of her shoes and handbags.

Much of the 750 lots offered for sale would feel right at home in many Lone Star residences. Even if perhaps a bit dated and the whiff of faded gentility, such items as the estate’s outdoor furniture and sporting goods speak as much to a life of casual elegance, while the heraldic coat of arm banners would be graceful interior additions. The many sets of dishes offered indicate entertaining was as important to Cassini as it is to hospitable Texans.

The legend of Cassini, the sorcerer who crafted the image of some of the world’s most famous fashion icons, is sure to enchant these items offered of what remains of his stylish world and remind us he was among the American tastemakers of his time. Fade to black of a life well-lived.