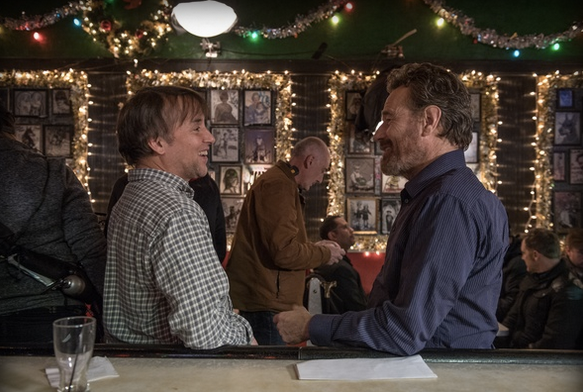 Looking for a way to honor Veteran’s Day this weekend? We highly recommend checking out the new release, Last Flag Flying, the latest cinematic triumph of Academy Award©-nominated director and Austin resident Richard Linklater. We caught up with Linklater at Austin Film Studios to discuss his formative years during the Vietnam War and the complexities of it in everyday life...and how that affected the film.

The story features an all-star cast that includes four Oscar-nominated actors in its ensemble: Steve Carell, Bryan Cranston, Lawrence Fishburne and Cicely Tyson. Set in December 2003 during the second Iraq War, Steve Carell’s character Larry “Doc” Shepherd’s son dies in the second Iraq War and is going to claim his son at Dover Air Force base. He enlists the help of two of his war buddies he hasn’t seen in 30 years, alcoholic bar owner Sal Nealon (Bryan Cranston) and pastor Richard Mueller (Lawrence Fishburne). Over the course of their journey to Dover, the three men embark on a road trip with twists and turns that are at times poignant, sad, humorous and reflective.

ROB GIARDINELLI: How did your formative years, when the Vietnam War was really happening, shape how you approached this film?

RICHARD LINKLATER: I remember as a kid that the war was the backdrop of everything. On the T.V. nightly news you would hear about how 39 soldiers had died in some place you couldn't quite pronounce. I had friends whose dads died in it and I saw some of my friends’ older brothers get drafted and go off to war. A friend of mine, James, lost his older brother and his dad. Then there is the subject of the draft - by the time I was of draft age the war had been over for a while and there wasn’t a draft anymore. The military was probably at an all-time low.

Then our leaders thought, ‘Oh we got to start this all-volunteer army and we're not going to have to enlist anyone anymore,’ but it created this big divide. I think what we have now as the end result is that there is a military and civilian divide over a legacy that is sort of like a warrior class. This divide has divorced us so much that they don't often speak to each other. But, we're all citizens and the military is on a mission for us. And, likewise when a politician, or the Commander-In-Chief decides to go to war, it should be for everybody because they're doing it in our names. Those decisions are big.

RG: Those are indeed big decisions and in the process of making a film about the effects of war, what was the greatest commonality that you found between the Vietnam War and the Iraq War?

RL: For both, I think the falseness of its origins that were a political calculation and the lie at the beginning. Like the Gulf of Tonkin and Weapons of Mass Destruction...neither were true. Politicians are wanting to go to war for other reasons, or have the feeling they had to [go to war] and it's very different. In the film, two of these guys were drafted and Larry Jr. (Son of Steve Carell’s character) signed up for it. Those relationships are the same...just with the guys with whom you know you're in the war.

Then there is also the love-hate relationship with the chain of command above you that is very common. No one gripes more about the military than the military - and for good reason. It's a huge bureaucracy and it's, you know, a big change. But they’ve earned the right, like anyone caught up in a huge bureaucracy, to feels that way. When it comes to being on field it can actually be like the main characters in the film. They can love it and then complain about it. That's very true of life when that love-hate thing never goes away.

RG: Much like the 30-year gap of time between the war buddies seeing each other in the film, how would you like Last Flag Flying to be remembered 30 years from now?

RL: Oh, wow. You never think about that sort of thing at the time while making a film, but I know there's probably this little genre of a war movie that is not on the battlefield...but at home. The fact that the soldiers are coming home, I'm thinking of certain movies, that don't take place in that arena. I think it will still be relevant because this relationship [with war] isn't ending anytime soon. The military the soldiers, and the families and soldiers, sign up for is that sacrifice.

RG: I keep thinking, and I don't know if that will change 30 years from now, but there is a line from the movie where one of the buddies says we're the only people in the world [in the U.S.] to ever occupy a campaign and expect it to be liberated.

RL: We have a great ability to delude ourselves. That's just the gut-wrenching political decisions and the inevitable mess of it that they know in advance. But, the political tide is so strong and they [politicians] can't exhibit the courage it would take to bite the bullet and say ‘no more. I'm pulling out now.’ In a lot of cases, they wouldn't get re-elected.

You know it's funny. In the film, President Jimmy Carter was the only guy who never bombed anyone. He was seen as weak and you could argue it cost him the [1980] election. But, no one died on his watch and we never talk about that. With the hostage situation then, I think most citizens would have been as happy if we’d gone in guns a blazin’ and killed people. To them that would have been a more satisfying result. They want action. They want blood.

Let's face it: this is some fundamental flaw that we can’t be too optimistic of ever changing.