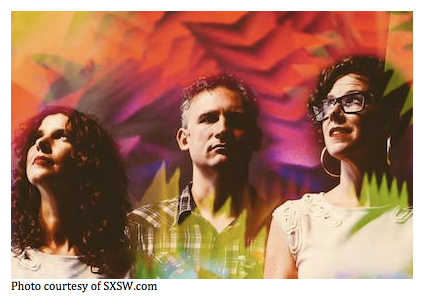 You think you know music? Think again unless you’ve heard Elizabeth McQueen, an unstoppable force of musical creativity. We love that she calls Austin home. She can rock, swing, and croon along with all sorts of genres, and she’s proven to be a successful musical dynamo, continually evolving her style to the delight of her fans.

You may know her from when she played guitar in Asleep at the Wheel, the Grammy-winning western swing band. Maybe you’ve heard her recent solo album “The Laziest Girl In Town”, or her more recent collaboration with Brothers Lazaroff, “The Laziest Remix”. If you like to explore Austin’s musical nightlife you’re bound to run into her sooner or later. She plays all over town – most recently at the Black Fret stage at the Art City Austin festival last weekend. McQueen is one of Austin’s most energetic and dynamic musicians, and we can’t wait to see a prime example of her newest musical incarnation this week at The Museum of Human Achievement.

Described as “retro future experimental,” McQueen’s latest group, EMQ, manifests an audible departure from her usual style. “It’s exciting,” she says, “It allows us to explore new modes of expression.” She still strums and sings with a powerful voice, but instead of a big-band country swing sound, this time her band is a stripped-down trio. Flanked by guitarist Lauren Gurgiolo (formerly of Okkervil River) and keyboardist Lindsay Greene (former bass player for Paula Nelson and Seth Walker), EMQ’s songs explore the joys, ambivalences and heartbreaks of long term commitment… an apt subject matter given McQueen’s recent departure from an eight-year tenure with Asleep At The Wheel, and her subsequent experiences of life at home with her husband and two children.

This week, for two days only, EMQ will perform their newest material in a special multimedia performance, Infinity + Infinity, featuring interactive and holographic environments designed and built by designer/visual artist Jerome Morrison. If you want to experience the innovative crossroads of music and visual arts, enhanced by technology and presented in one of Austin’s most avant-garde venues, you won’t want to miss this.