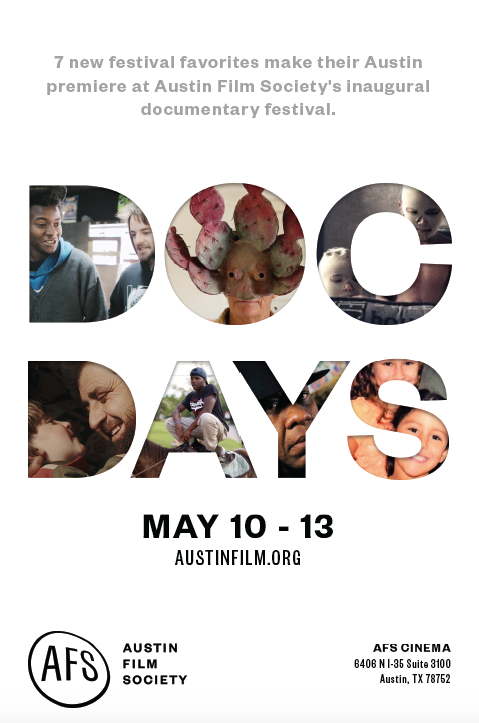 May 3, 2018 7am By Lance Avery Morgan Photography courtesy of Austin Film Society

We love finding cool new things to do, don’t you? That in mind, the Austin Film Society (AFS) launches its inaugural mini-festival, Doc Days, a long weekend of brand-new documentary films with visiting filmmakers from the US and abroad, on May 10 to 13.

In addition to screening favorite new documentaries from the festival circuit, the weekend includes parties, discussions, and moderated Q&As by Austin’s documentary film community. Scheduled with no overlapping screenings, festival attendees can see every film back to back. The series was programmed by Austin Film Society program staff in conjunction with Programmer-at-Large, Todd Savage, who co-founded the program with AFS.

Here's a look at what you’ll see when you get your passes:

The series kicks off on Thursday, May 10 with an opening reception prior to the screening of MINDING THE GAP, the Sundance award-winning debut feature from Bing Liu. Producer Diane Quon will be in attendance to introduce and Q&A the film, which, over the course of years, follows a group of skateboarders in the rustbelt and their transition to adulthood.

On Saturday, May 12, AFS welcomes filmmaker Rudy Valdez, whose film THE SENTENCE focuses on his personal family story about the extreme consequences of mandatory minimum sentencing. Valdez will be in attendance to introduce and Q&A his film, which received the Audience Award at Sundance in January.

We can’t wait to see Kate Novack, the director of THE GOSPEL ACCORDING TO ANDRÉ, who will attend the festival on May 12 with her fabulously entertaining account of the life and times of André Leon Talley, Editor-at-Large of Vogue Magazine and fashion world maven. A southerner turned New Yorker, André made an inspiring journey from small town North Carolina to the runways of Paris and Milan, all the while honing his unique vision and style. The premiere screening will be followed by an after party.

Marfa-based filmmaker David Fenster returns to Austin for the premiere of his playfully experimental documentary, OPUNTIA, about the journeys of Álvar Núñez Cabeza de Vaca, a sixteenth-century conquistador turned Shaman.

Other selections include the Sundance Grand Jury Prize winner OF FATHERS AND SONS, which features a Skype Q&A with Talal Derki; Everardo González’s Mexican drug violence documentary DEVIL’S FREEDOM, with Producer Roberto Garza in attendance; and RaMell Ross’s HALE COUNTY THIS MORNING, THIS EVENING, which premiered at Sundance.

Cocktails and drink specials inspired by Doc Days films will be served throughout the festival.