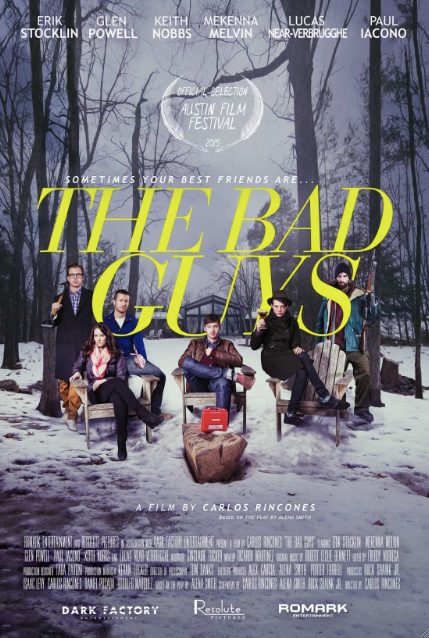 There’s a new indie film that may change how you look at your youthful past. In fact, this might be the best indie film you’ve seen in years. Romark Entertainment, Resolute Productions and Dark Factory Entertainment’s film “The Bad Guys”, by director Carlos Rincones, had its world premiere at the 22nd annual Austin Film Festival on Sunday November 1 at the Rollins Theatre at the Long Center for Performing Arts. The film stars Glen Powell (“Scream Queens”), Erik Stocklin (“Stalker”), Mekenna Melvin (“Chuck”), Lucas Near-Verbrugghe (“Grimm”), Keith Nobbs (“Public Morals”) and Paul Iacono (“The Hard Times of RJ Berger”). It knocked the socks off the audience with its riveting relationship plot and deft directing by Rincones.

So, what’s all the fuss about? The plot, the story and the acting that felt far from acting. In the film, during a brief return trip to his childhood home, a budding filmmaker (Stocklin) is confronted by the now-grown ensemble of his old hometown friends – none of whom are aware that he intends to make his fortune off the shared childhood trauma that splintered them apart all those years ago. During an alcohol-fueled weekend of reminiscence and regret, the eccentric 20-somethings open old wounds, make new mistakes, and realize that the consequences of youth can follow you into adulthood. Proving, you can’t go home and expect to find it the way you left it. Life, and its characters progress, too. Lushly shot in the snowy Hudson River Valley, the season becomes a character in its own right, too.

Carlos Rincones (writer, producer, director) started his career working with Robert Rodriguez as a Vfx artist at Troublemaker Studios. He produced his first feature, Blacktino, in 2010 which premiered at SXSW. Rincones is currently attached to direct Marc Norman’s (Oscar-winning screenwriter for “Shakespeare In Love”) script called “One Good Day”. Rincones co-wrote “The Bad Guys” with Rock Shaink and Alena Smith, whose eponymous play served as the basis for the movie. Smith was one of Variety's 10 TV Writers to Watch in 2014. She previously wrote for HBO's “The Newsroom” and is now writing for Showtime’s “The Affair”. Shaink and Rincones produced “The Bad Guys” with Isaac Levy, Daniel Posada and Rodolfo Marquez, while Alex Garcia, Porter Farrell and Smith executive produced the film.

“The Bad Guys” is the first project from Resolute Productions and producer Isaac Levy, an Austin native and graduate of the University of Texas at Austin whose vision was integral to the success of the film. We expect to see big things from this dynamic filmmaking team.

Here’s more: The Trailer at: http://www.thewrap.com/the-bad-guys-trailer-finds-stalker-star-opening-old-wounds-video/