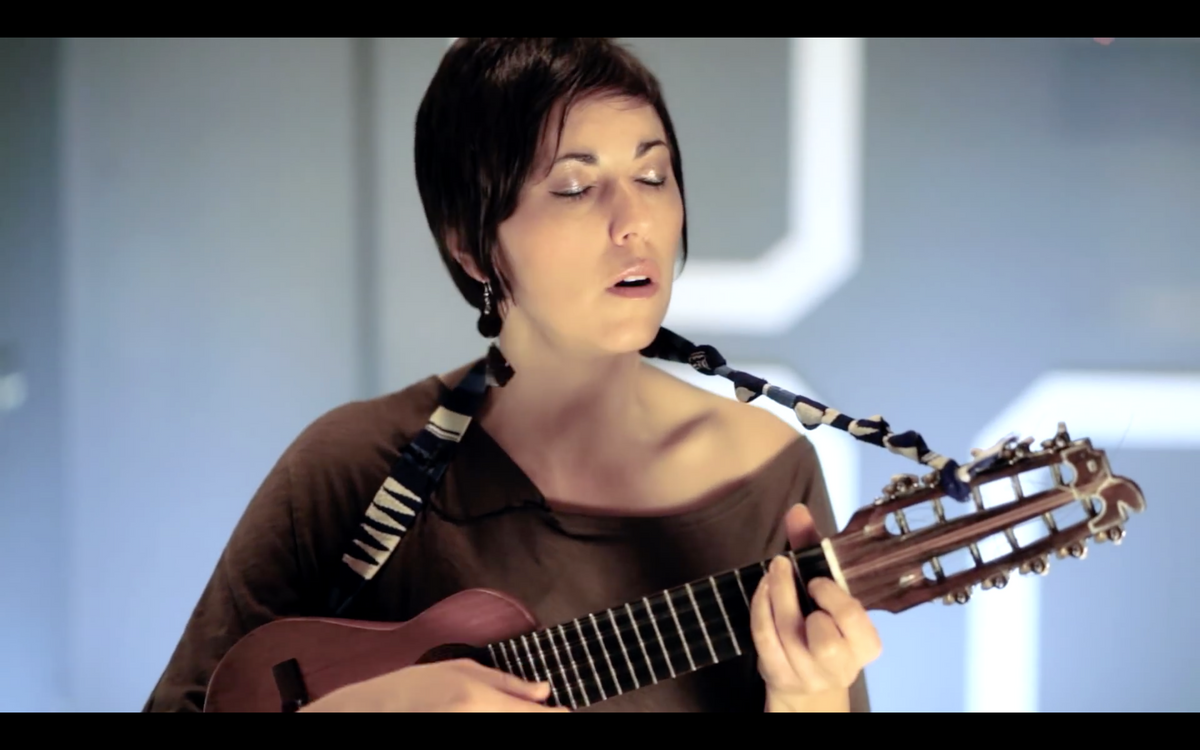 GINA GHAVEZ TO ROCK THE HOUSE FOR COLLEGE BENEFIT

You likely know Gina Chavez just released her latest album, Up.Rooted, a strong release filled with catchy rhythms, energy and soul. Now she’s preparing to unveil the music video for the featured single, ‘Siete-D’, with a musical bash at The Stateside Theatre this Saturday, April 11. Featuring Chavez as well as local standouts Mother Falcon and Elizabeth McQueen, the concert will serve as a fundraiser for Chavez’s Niñas Arriba College Fund, which raises money to provide college education for girls in Soyapango, El Salvador.

Chavez sings with a voice reminiscent of the legendary female vocalists of the 20th century – powerful, yet nuanced; confident, yet intimate. Brought up amid the influence of lyrical songwriters like Patty Griffin and Ani Difranco, Chavez started her musical career as “a girl with a guitar,” singing folk style ballads of lyrical poetry. It wasn’t until she traveled to Argentina, studying abroad while in college at the University of Texas, that she discovered the Latin styles that would influence her current musical direction.

In Buenos Aires, she discovered an exciting style of Argentine music with rhythms she’d never heard before. “It totally intrigued me. That was my doorway to learning more about Latin music.” She dove into the Nueva Canción movement, a Latin American musical tradition that rose to prominence in the 1960s. Now-legendary singers such as Mercedes Sosa, Silvio Rodríguez, and Violeta Parra championed the movement, which was associated with folk traditions, poetic lyricism, and sociopolitical upheaval. Chavez was captivated. “It was very lyrically driven, yet had this Latin element, Latin rhythms that draw people in.” Of course, just like any Texan, she had previously heard plenty of Tejano, Ranchera and other styles of Latin dance music. “It didn’t strike my heart in the same way that some of the songs from the Nueva Canción movement did.”

So began Gina Chavez’s musical path toward Latin America. She developing a signature style influenced by strong Latin rhythms and Spanish lyrics, yet fresh and modern with contemporary beats and original melodies. Her performances are an eclectic mix of songs written entirely in Spanish, some completely in English, and some that are fully bilingual. “We take the listener on a journey.” No matter what language the audience prefers, the music always captures the crowd. “We grab their bodies with movements, and we grab their hearts with thoughtful lyrics.”

In 2009, Chavez traveled to El Salvador to teach English as a volunteer in a local girls’ school. Her destination was Soyapango, a city on the edge of the capital, San Salvador. After teaching and living with the school children for eight months, she felt a kinship with them. “They were like my little sisters.” After returning to the US, she wrote the song ‘Siete D.’ “It’s a snapshot of our experiences as told through someone in a seat on the 7-D bus, the route that connects Soyapango to San Salvador… You climb into old American school buses that are bursting with color and blaring reggaeton (Latin hip hop) as they tear through crowded city streets and hold on. On the surface, ‘Siete-D’ is a party song, but ultimately it’s a tribute to the spirit of the Salvadoran people who endure gang violence and extortion every day with quiet resilience and the most giving hearts I have ever known.”

‘Siete D’ won the international John Lennon Songwriting Contest, and shortly thereafter the band returned to tour in El Salvador. Winning attention from the Salvadoran press, they played to enthusiastic crowds and planted the roots of a loyal and growing fan base. When she returned to the U.S. she reflected on her volunteer experience and the impression it left upon her. “At the end of 8 months we got to leave and go back to our comfortable first world lives, and we knew that they couldn’t do that.” Despite the students’ will and dedication, they remained at risk to live a life of struggle, poverty, and violence. “We didn’t want that for them.”

So she started a scholarship fund for the girls at the school, with the ultimate goal of sending them to college so they may lift themselves toward greater aspirations. Hence the name of the fund, ‘Niñas Arriba.’ She started raising funds by playing benefit concerts. “It’s become more and more successful,” Chavez says proudly. “Our fans have really liked that connection. We’ve been able to marry the music with something more meaningful.”

Now is your chance to be part of this uplifting project. Catch Gina Chavez this Saturday at the Stateside Theatre in Austin. Proceeds from the concert will benefit the Niñas Arriba College Fund, and you’ll have a chance to see some of Austin’s most talented local musicians. It will be a high-energy night of grooving and dancing to the global beat, and you’ll be the very first audience to see the new video for the hit song ‘Siete D.’

In addition to raising funds to make her vision a reality, Gina Chavez has also been the recipient of one of Austin’s newest, most innovative artistic support in the form of a grant from Black Fret, the music patronage society. Last year she was nominated and won a $10,000 grant from Black Fret, which helps local musicians fund projects that may otherwise be difficult to execute. Chavez used part of her grant money to shoot the music video for ‘Siete D’ in El Salavador last year. “I worked with a local production company down there to shoot the video. We got to shoot on the 7D bus and the girls got to be in the video,” she says proudly. “The support from Black Fret allows us to do things like that, and be able to take it to the next level.”

Ultimately, Black Fret’s mission is to support and promote Austin’s local music, which is as much a cultural gem as any form of fine art. “It’s peace of mind, knowing that you have those funds to work with.” Even when musicians achieve success and recognition, it can be financially difficult to acquire new equipment, record new tracks, and release videos. “It’s really amazing to have support from the community via Black Fret, knowing that the community is saying, ‘yes we want you to be able to put your energies into creating more quality content that can inspire and uplift people’”

Gina Chavez and Black Fret’s mutual as well as individual success is a big inspiration for us at The Society Diaries. You don’t have to be a musical star, or a big player in the creative industry to create a social benefit project from your passions. “Don’t be afraid to put something good out there into the world, and don’t be surprised when a good response comes back,” Chaves says. “And at the same time, don’t be discouraged if it doesn’t immediately [succeed]. It’s just about following your heart. Don’t be afraid to listen to what that might be calling you to. Dream a little.”

Join the fun at the Stateside Theatre this Saturday, tickets are still available at www.austintheatre.org