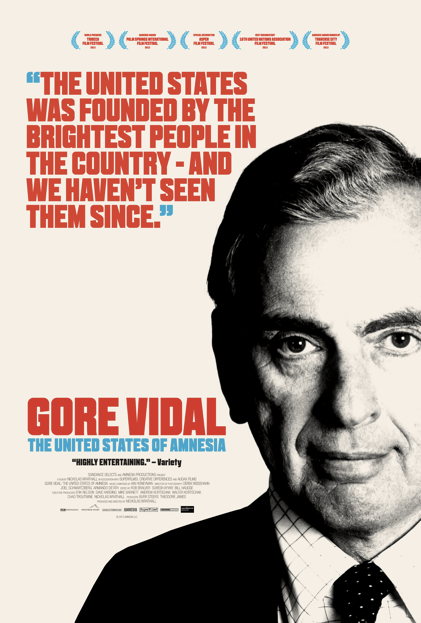 He was a pop culture legend with had a huge brain and combative personality. In fact, few twentieth-century figures have had a more profound effect on the worlds of literature, film, politics, historical debate, and the culture wars than the inimitable Gore Vidal. Now the documentary, IFC Films’ “Gore Vidal: The United States of Amnesia” shines the light on this bright, cerebral star who enlightened – and infuriated - so many during his time.

Anchored by intimate one-on-one interviews with the man himself, Nicholas Wrathall's new documentary is a fascinating and wholly entertaining portrait of the last lion of the age of progressive politics in America. Gore Vidal's professional life spans more than 50 years of American politics and letters. His return to America in 2005 marked the last great stage in his creative career and this film represents an extraordinary opportunity to share his view on America in the twenty-first century

The film is chock-full of commentary by those who knew him best-including filmmaker/nephew Burr Steers and the late essayist Christopher Hitchens. It seamlessly blends with footage from Vidal's legendary on-air career to remind us why he will forever stand as one of the most brilliant and fearless critics of our time. Featuring candid vérité footage of Vidal in his final years, the film explores his enduring global impact on art, politics, and everything in between. His overview of the current state of the Republic and the health of US democracy is unique and incisive.