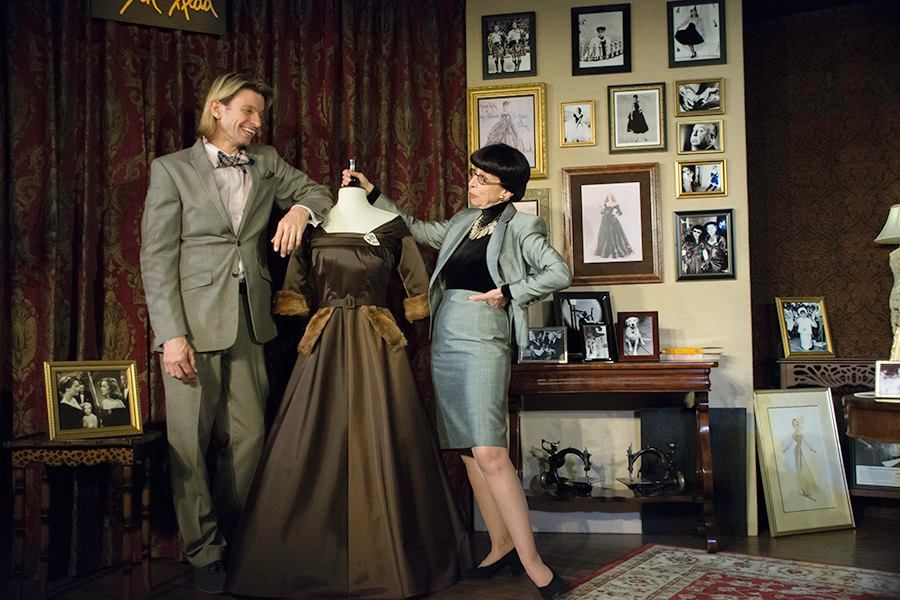 Hollywood’s Golden Age costume designer Edith Head comes alive. Very alive, thanks to Susan Claassen, who is appearing with Austin Cabaret Theatre (http://www.austincabaret.org) on Tuesday, May 19 and Wednesday, May 20, 2015 for her tour de force, “A Conversation With Edith Head” that is a whirlwind of talent. When I caught up with her by phone from her Tucson residence, the star is a bundle of energy. How could she not be to keep up the breakneck pace needed to mount such a performance?

Stuart Moulton, Claassen’s show host and founder of Austin Cabaret Theatre, had alluded to her vivacity and shares of her performance of Head by sharing, “She's strong and independent (yet incredibly vulnerable as well). Edith Head was the first businesswoman in a (still) male-driven Hollywood and she could play with the big dogs. A lot of people think that this show would have more appeal to women than to men, but it has been so well-received by both sexes because everyone can relate to that common struggle to get to the top and stay there. She's really fascinating.”

It turns out that the play is truly a smart vehicle. Confides Claassen, “Over 85 percent of the play is in Edith Head’s own words.” It turns out the actress spent hundreds of hours pouring over Head’s papers, calendars, diaries and mementos at the Margaret Herrick Library at the Academy of Motion Picture Arts & Sciences Library in Los Angeles to research the role. She wanted to get it right… and she does.

The project was first developed years ago when, as Claassen freely admits, she discovered her own likeness to that of Head’s was uncanny and the rest, as they say, is show business history. Then The New York Times came calling. Mountains of press ensued and the packed-house capacity of the show remains a staple on the theatre circuit.

In fact, the resemblance of the two is so striking that even Tippi Hedren, whom Head so beautifully dressed for Hitchcock pictures in the 1960’s, calls Claassen ‘Edith,’ who confesses, “People think I really am her.” She continues, “I’d be 118, of course if that were so, but Edith Head is still relevant since she died relatively recently in 1981 (after dressing Steve Martin’s film noir classic, “Dead Men Don’t Wear Plaid”). Plus, Claassen is touched that Head’s own star appeal endures with the fans. “What a privilege,” she avers, “People want to remember a film she designed, who they were with, or a fabulous outfit they recall that still has fond memories.”

The fact that Head is still relevant is an understatement. “She was a remarkable woman and it is a gift to portray her. Listen, you don’t appear on a postage stamp, have an animation and become a Google Doodle (on Head’s birthday) without a lifetime of work to which Edith Head devoted herself,” she states.

Most of that lifetime of work can still be seen on Turner Classic Movies, Amazon Prime and Netflix, so the legend continues. When Claassen is asked what films Head designed that she has the most affinity for, she is quick to admit it is “Rear Window”, “To Catch A Thief” (both starring fashion icon Grace Kelly), and “The Lady Eve.” She confides, “From the moment Grace Kelly first flips on the light switch in ‘Rear Window’ the style never stops.”

When I ask her about Head’s theory of fashion design, she muses, “She understood that the purpose of the costume designer is to drive the film’s narrative.” In that driver’s seat from the 1924 until 1981, Head was a woman in a man’s field in a man’s industry. The other designers at the time she began in the studio system were all men. She took Travis Banton’s place at her home studio Paramount and rivaled the other studios’ design geniuses, most of whom have been forgotten with time like Adrian (MGM), Walter Plunkett (RKO), Charles LeMaire (20th Century Fox), and Orry-Kelly (Warner Bros). Head’s legend endures though. “You have to remember she was the original brander,” emphasizes Claassen. “She was everywhere when no Hollywood designers had that kind of exposure or household name value. With her syndicated newspaper columns, books, dress patterns, and personal appearances…Edith Head became a star in her own right.”

That star power of Head that Claassen brings so vividly to life yielded 35 Oscar nominations (the Oscars didn’t recognize costume design as a category until well into the golden era of Hollywood, 1949), and Head won eight. Doing the math on that, she was nominated almost every year from her mid-career years onward. In addition to Grace Kelly, Head dressed a Who’s Who in the pantheon of classic stars including Audrey Hepburn, Doris Day, Loretta Young, Kim Novak, Natalie Wood, Elizabeth Taylor, and a plethora more. Her secret to dressing an array of faces and figures and making them feel magical? Head herself is famous for saying, "I always wear beige, black or white. For one thing I look good in them. For another, when I'm beside a star at a fitting and she looks into the mirror, I don't want to be competing in any other way."

About personal style, Claassen adheres to Edith Head’s own dictum to “find your own style, Honey, and stick to it.” The inimitable fashion savvy of Head and Claassen both stick together like needle and thread, so run, don’t walk to see it in person at Austin Cabaret Theatre (http://www.austincabaret.org) on Tuesday, May 19 and Wednesday, May 20, 2015.