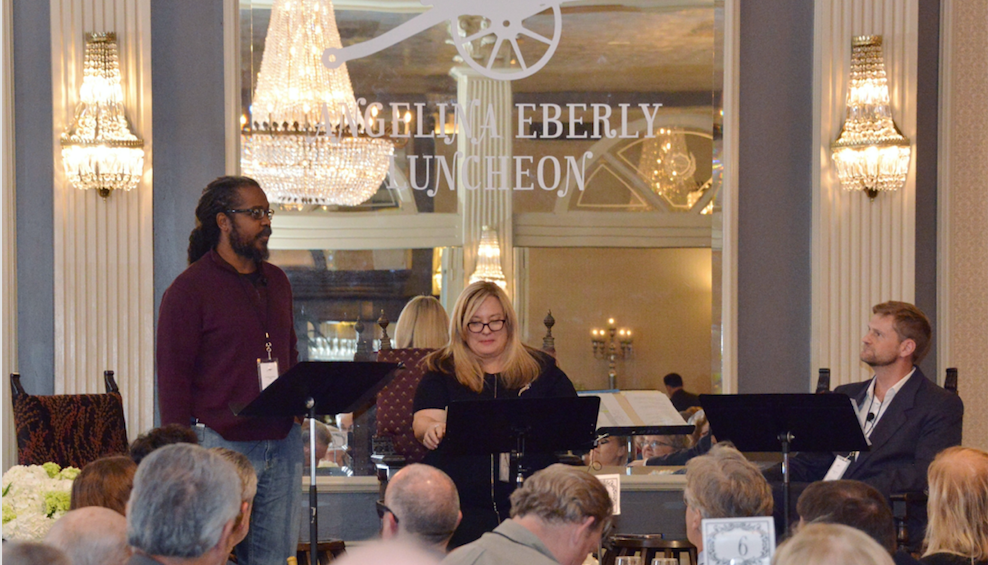 Don’t you love that the philanthropic luncheon season begins soon? In fact, on Friday February 7th, 2020, the Austin Club will host the Angelina Eberly Luncheon that is the annual signature event of the Austin History Center Association (AHCA). The event brings together over 300 guests: business associates, coworkers and city leaders; as well as newcomers and longtime residents ‐ who share their love of Austin history. The theme of this year’s upcoming luncheon will be the narrative, Our Austin Story, telling the beginning period of Austin’s rich and diverse history, narrated by Ted Lee Eubanks, certified interpretive planner, with certain historical figures, developed by renowned playwright Paulette MacDougal and directed by well-known theatre director, Don Toner.

The Austin Club will hold the luncheon at the historic Millett Opera House located at 110 E 9th street in downtown Austin where it opened in 1878. In its day, the opera house provided Austin with a world-class stage for performances for touring acts and various amusements including political conventions, inaugural balls and UT commencements. The luncheon is named after 1840s Austin innkeeper, Angelina Eberly, who fired the cannon that saved the Texas archives from being removed from the city in the capital of the Republic of Texas at the time. Charles Peveto, the Eberly luncheon chair, is most excited about the event’s patrons dining on a menu, based on early foods of Austin that would have been available in the 1840s. Current AHCA president and past Austin mayor, Lee Cooke, will lead in celebrating the 40th anniversary of the Austin History Center Association.

The luncheon will kick off the festivities starting with a coffee reception and piano music. Once inside, guests can mingle in the lobby before ascending the staircase in the main foyer of the Austin Club where a well-crafted lunch will be served. The fun will continue as lunch guests gather in the main ballroom for an exciting program based on the history of Austin itself. The space is beautiful and adorned with massive chandeliers that illuminate the room and the guests in a warm glow.

The event raises essential funds to help support the organization, with a portion of the proceeds funding the Austin History Center of the Austin Public Library. Many of those who love Austin history consider this to the most important luncheon in the city. The focus this year’s Angelina Eberly Luncheon is on the origins of Austin and how Mirabeau Lamar envisioned it would become a seat of empire. Event tickets can be acquired at the Austin History Center http://austinhistory.net/eberlyluncheon/ and sponsorships for this event can be acquired at http://austinhistory.net/eberlyluncheon/eberly-luncheon-sponsorships/