As we know, there’s a great deal of film and TV attention on Dallas these days with the city as the backdrop locale. That shows that the Texas Film industry is growing more at the recent Dallas International Film Festival which ran for 11 gloriously film-packed days, with more than 110 films screened in the most notable theatres across Dallas.

The screenings covered myriad genres – from documentaries like the regression-inducing “Starck Project”, to cult classics like the 25th-Anniverary of 1987’s ROBOCOP including star Peter Weller, Angie Bolling and 30 of the films players that hadn’t been together since the film was released. Now that’s a reunion.

The venues included some of Dallas’ best art houses along with the grand, old Majestic theatre and the newly restored Texas Theatre - forever infamous as the spot where JFK assassin Lee Harvey Oswald was captured.

Some of our favorites of the screenings include:

Diana Vreeland: The Eye Has to Travel - is an inspiring and funny documentary about the beyond-amazing career of Diana Vreeland. Her mother, having called her “my ugly duckling,” could never have know the enormous impact that Diana would have on the fashion world as Columnist-cum-Fashion Editor for Harper’s Bazaar then Vogue. Afterward she consulted to the Costume Institute of the Metropolitan Museum of Art while along the way she made the careers of Lauren Bacall, Lauren Hutton, Twiggy, Richard Avedon, and so many more. It was produced and co-directed by Lisa Immordino Vreeland, Granddaughter-in-law of Mrs. Vreeland.

Richard Linklater’s latest, “Bernie” starring Shirley Maclaine, Jack Black, and Mathew McConaughey is a dark, comedic telling of the bizarre murder case that took place in Carthage, Texas. It was written by Linklater and Skip Hollandsworth.

The locally produced favorite screened was “Pros and Cons.” The film, brimming with local on-camera luminaries such as Earl Browning III, Le Marc Johnson, and LeeAnne Locken, follows a man overtaken by competitive fury in the “rough and tumble” world of Fantasy Football. It was directed by Bryant Hicks and written by Scott Ross. 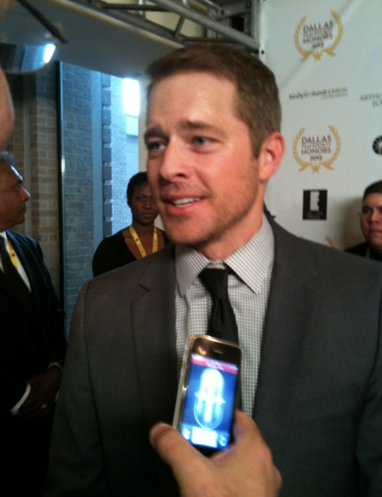 A highlight, though, was attending the Dallas Film Society Honors held at the Hotel Palomar on the final Friday evening of the fest. It was an amazing parade of honorees and film legends and on the red carpet we chatted with:

We are already looking forward to next year’s festival. For more information, visit www.dallasfilm.org.