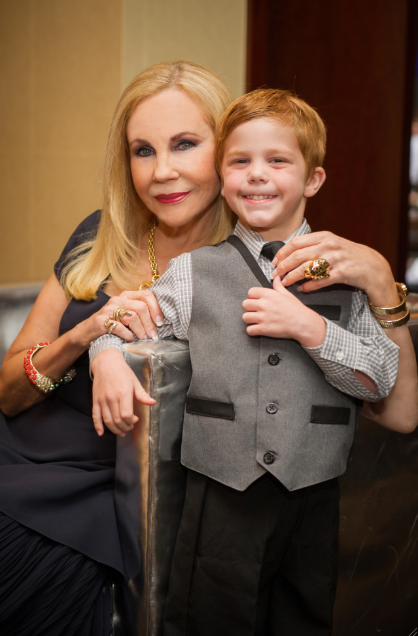 Interestingly, the award is named in honor of the first human known to have suffered from arthritis in 3,500 BC. His mummified remains discovered some 5,000 years later, which showed evidence of rheumatoid and osteoarthritis and provided valuable information for scientific study of the nation’s most debilitating disease. The Ötzi was also a healer, carrying a pouch of medicinal herbs that scientists believe were used to help with the pain and inflammation caused by his arthritis.

Dr. Dirk Van Teurenhout of the Houston Museum of Natural Science reviewed the scientific findings of the Ötzi and its particular relevance to proving that humans have suffered from Arthritis for over 5,000 years for the evening’s guests.

Farb, escorted by 5-year-old Tucker Beau Hyatt, thanked all for inviting her to be its first recipient and encouraged those attending to support the important work of the Arthritis Foundation. She explained that she and Tucker Beau are on a mission to create awareness about the great work of the Arthritis Foundation. She also stated that the Foundation is helping to find a cure, new treatments and preventative lifestyles for the millions of people suffering from the various types of this disease. She reminded the audience that the U.S. economy spends $128 billion per year on the over 100 forms of Arthritis – and how it affects men, women and children reiterating that it is not just for the mature. Tucker Beau added that his arthritis affects his large and small joints and that he receives joint injections to help with the pain. Farb also encouraged Houstonians to support this national organization so we can live better, longer and pain free.

The Arthritis Foundation plans to raise at least $300,000 at this year’s Bone Bash to fund research to end the pain and find a cure for Arthritis.