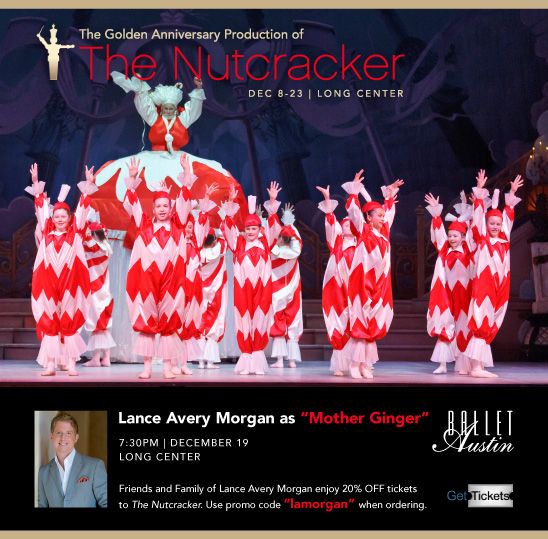 It is that time of the year again – time for the season’s beautiful ballet that captures the hearts of children of all ages. Wednesday, Dec 19, 2012 at The Long Center is where our very own Lance Avery Morgan has been honored to be cast in the Mother Ginger role in this year’s “The Nutcracker” performance.

Here’s some info from the great folks at Ballet Austin: every year as the annual production ofThe Nutcracker approaches, Ballet Austin is always abuzz with who will be cast as Clara, the Snow Queen, Cavalier, and the Sugar Plum Fairy among others. But, it turns out… one particular character that always attracts wide attention throughout Austin is that of the beloved Mother Ginger character.

In the spirit of keeping Ballet Austin’s production of The Nutcracker unique to Austin, the Mother Ginger role has historically been filled with local Austin ‘celebrities’. They have been fortunate to have such guests as the late Governor Ann Richards, Lance Armstrong, Luci Baines Johnson, Senator Kay Bailey Hutchinson, Michael Dell, Joe Sears, Kinky Friedman, Maestro Peter Bay, and many more. All have sported the entertainingly oversized costume, complete with a showy head-dress and extravagant make-up.

See the artwork link for a special friends and family 20% discount to enjoy the performance! It turns out that Morgan is having a few special people into the Green Room behind the stage before the performance – it will be a Ginger theme, so ‘buckle up,’ he says for the champagne, nibbles and festive treats. For more information, see www.balletaustin.org