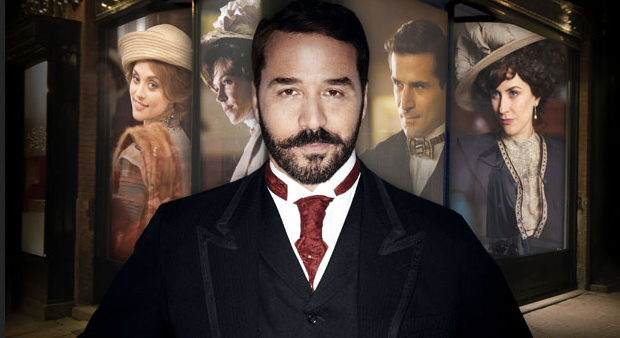 We love that following its ratings success in the U.S., MASTERPIECE and PBS have announced a second season of Mr. Selfridge, starring Jeremy Piven as the flamboyant American entrepreneur who founded the famous Selfridge’s department store. Season II will air on MASTERPIECE Classic in 2014.

The first season of Mr. Selfridge reached nearly 15 million viewers over its eight episodes, with an average viewing audience of 4 million people an episode. An ITV Studios/MASTERPIECE coproduction, the season also had strong online viewing numbers, totaling over 1.1 million views during the season's run. In addition, Mr. Selfridge was recently honored with an Emmy® nomination for Outstanding Music Composition for a Series. We couldn’t get enough of it.

Currently filming in the UK, the second season picks up the story in 1914, as the store celebrates its fifth anniversary in business. With World War I imminent, the lives of everyone at Selfridge’s will inevitably be affected.

Mr. Selfridge marked Jeremy Piven’s return to television after his Emmy® and Golden Globe®-winning performance in the hit series Entourage. “I’m absolutely delighted that MASTERPIECE viewers welcomed Mr. Selfridge into their homes,” said Piven. “Mr. Selfridge is a true ensemble piece, and audiences can look forward to seeing the return of their favorite characters and some intriguing new faces.”

MASTERPIECE executive producer Rebecca Eaton said, “It is clear from our audience’s reaction that they want more of Harry Selfridge, his family and department store shopping. We’re happy to have Jeremy and the rest of the talented Mr. Selfridge cast in the MASTERPIECE family.”