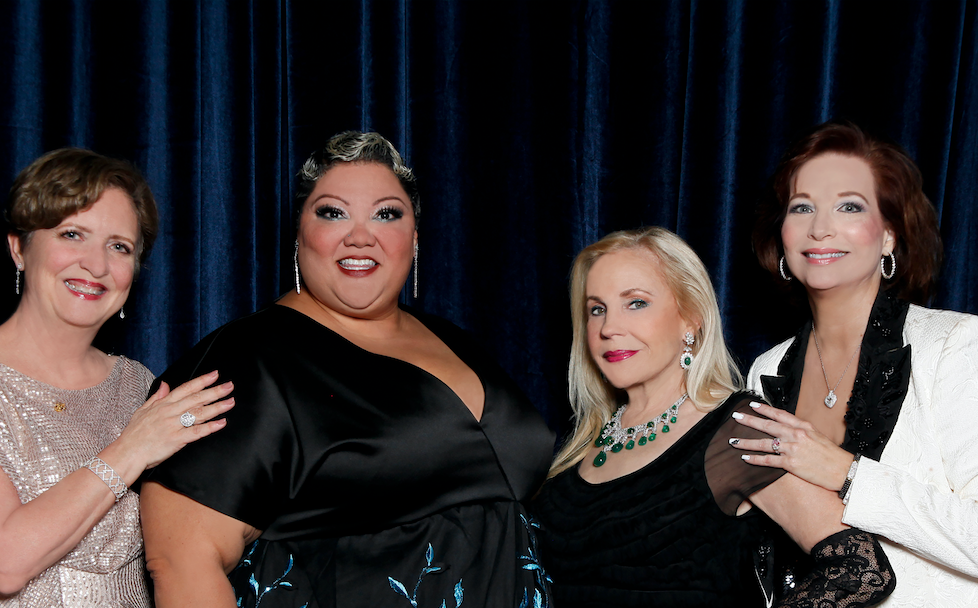 Houston is a dynamic city, in part, due to its residents. Recently, Houston philanthropist, author, and civic leader Carolyn Farb was honored with the Downtown Rotary Club of Houston's Salute to Houston Heroes Downtown Diamond Award. Club President Richard Slemaker III presented Farb the award at the Ballroom at Bayou Place in Downtown Houston.

The gala evening was hosted by Downtown Rotary Club of Houston member Christina Wells. An America’s Got Talent semi-finalist, Wells seamlessly performed double duty as both emcee hostess and featured singing artist. Christina was accompanied by the James C. Neill Elementary School Girl’s Choir, a group of talented Fort Bend ISD youngsters that Christina mentors. The Richard Brown Orchestra entertained guests during the evening’s main program and provided the music that had everyone dancing. Virtuosi of Houston, the premier young artists’ chamber orchestra, also performed with Christina Wells, while an after-party following the event featured DJ Sun. The event was deftly chaired by Rotarians Lynn Birdwell and Susan DeBakey.

In her acceptance, Farb remarked, "I am deeply honored to receive the first Salute to Houston Heroes Downtown Diamond Award. It is an award I will proudly treasure as a humanitarian because it comes from an entire community of humanitarians. Many responsibilities come with being a Rotarian and many opportunities are given to Rotarians who strive in thought and actions to improve standards of living, for all people worldwide. Poverty anywhere endangers prosperity everywhere." Farb also received the prestigious Rotary Paul Harris Fellowship Award, presented by past Rotary District Governor Dr. Nick Giannone.

We’re big fans of Carolyn Farb here. Over the decades, we love that she has raised tens of millions of dollars, tirelessly supporting Houston and international causes in the performing arts, education, medical sciences, and women’s and children’s sectors. The author of two dynamic books on fundraising, Having A Ball and The Fine Art of Fundraising, she has been the champion of causes that include Rotary International’s Children of the Dump Project benefiting homeless children in Nicaragua, UNICEF, the United Nations International Children’s Emergency Fund, Houston’s Museum of Fine Arts, the Houston Ballet Foundation, and Stages Repertory Theater. She is also the premier recipient of the Legacy Award presented by the University of Houston’s College of Natural Sciences and Mathematics. She supported the College’s Auroral Spectra studies of the Earth’s atmosphere, earning the CASE Gold Accolade award. She established the first Challenger Center for Space Science Education at the Houston Museum of Natural Science. Over 4.4 million students have completed Challenger Center simulated missions into space. Farb’s commitment to medical research and patient care includes raising millions for AIDS research, the Neurofibromatosis Foundation, I Have a Dream-Houston, and United Cerebral Palsy. Farb received her Honorary Doctorate in Humanities from Northwood University in 2003.

Proceeds from the Salute to Houston Heroes Gala will serve to fund the club’s standing community service committees, including the Free Enterprise Camp committee, which trains high school students in ethics and business basics, the Prisoner Entrepreneurship Program, Houston Livestock Show and Rodeo scholarships, and water and public health programs of the International Committee. Chartered in August of 2018, the Downtown Rotary Club of Houston is among the newest of Rotary International’s over 33,000 Rotary Clubs around the world. A 501(c)(3) organization, the Downtown Rotary Club of Houston is open to men and women recognized for their leadership skills who are dedicated to community service. For more information, visit DowntownRotaryHouston.org.