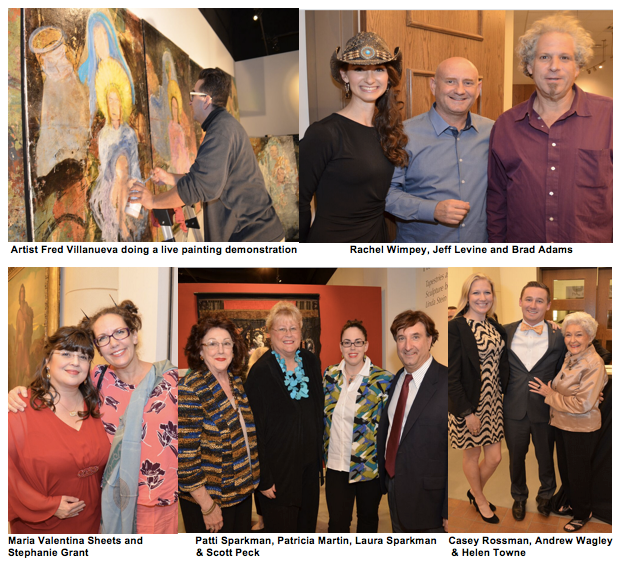 It was a night that Dallas could be so proud of…when over 450 guests attended the “8x8 Art Exhibition and Auction” at the Museum of Biblical Art in Dallas last Wednesday to bid on miniature works of fine art, and support the museum’s educational programs. Scott Peck, Museum Curator and Director, pronounced the evening a great success and said, "The event was a near sellout of over 140 works of art,”

Gathering under a large digital clock that counted down the minutes to the auction close, Scott Peck welcomed everyone and thanked Co-Chairs Maria Valentina Sheets and Rachel Wimpey, and the event committee and sponsors who made the evening possible. “This annual event raises funds for all our educational programs throughout the year – field trips, Summer Art Camp for Kids, Heroes of History Field Trips, and special workshops we offer for both kids and adults,” said Peck.

The highlight of the evening was a live painting demonstration of large-scale works by Dallas artist Fred Villanueva whose Ash Studios was recently ranked “Best Gallery in Dallas” by D Magazine. Another highlight was the Celebrity Art Gallery, created by iconic comedian Ruth Buzzi and her actor/artist husband Kent Perkins. Paintings and mixed media works were submitted by Emmy-nominated actress and comedian Lily Tomlin, the legendary Carol Burnett, as well as JoAnne Worley and country singing legend Kris Kristofferson.

Guests also enjoyed a barbecue buffet by Big Al’s Smokehouse BBQ, in keeping with the Texas-casual theme, music in the Atrium by the Lucky Pierres, a wine pull in the Northeast Gallery, and lovely floral arrangements from Gardenia Event Decor. Eight by eight was created seven years ago by Jeff Levine who based it on the number 8 which is a symbol for the Hebrew word for life, which is Chai.”

You likely know that the Museum of Biblical Art in Dallas is unlike any museum in the world. It has a simple mission: to display art with a Biblical theme. It is one of the few museums in the country that is devoted to Biblical themes and was established in 1966 and named the Museum of Biblical Art in 1999. Nothing of its size exists in the United States, making it a treasure trove for art enthusiasts. Diverse types of art are exhibited including bronze sculpture installations, drawings, fine prints, and oil paintings. Specialized galleries have been created for Biblical Archaeology, Jewish Art, Religious Architecture, Israeli Art, Women’s Art, African American Art and Hispanic Art.