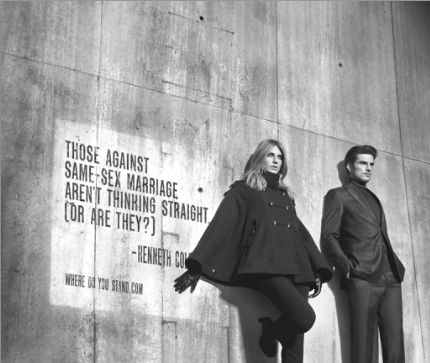 We all know that Kenneth Cole has become an icon for his irresistible shoes, handbags and clothing. His discerning design eye for fashion isn’t his only claim-to-fame. Cole’s efforts dedicated to social activism and philanthropic initiatives should not be overlooked. His new book, This is a Kenneth Cole Production (Rizzoli New York), captures the three-decade long career of this designer who has worked his way up from rags to riches, building his brand from a simple shoe business into a global powerhouse.

Cole has chosen to live a life of conscience, distinguishing himself as a fashion designer who appeals to those who sport the young, New York urban style and a philanthropist who uses his fashion advertisements to support social movements such as HIV/Aids community, same-sex marriage, gun control, and the homeless, to name a few. Lisa Birnbach wrote This is a Kenneth Cole Production with contributions from celebrity icons Bill Clinton, Diane Von Furstenberg, Robert Redford, Mark Seliger, and Joe Zee.

At $75, dive into Kenneth Cole’s compelling story and find it at finer bookstores everywhere.