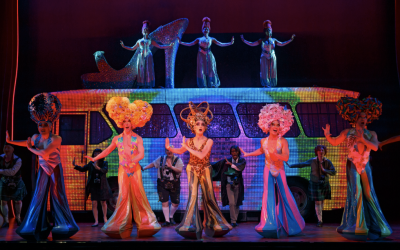 PRISCILLA QUEEN OF THE DESERT THE MUSICAL CAPTURES HEARTS

You loved the film. Now you can love the touring Broadway in Austin production at Texas Performing Arts of the first national tour of Priscilla Queen of the Desert The Musical. The musical magic happens next week: May 8 -12, 2013 (Wednesday–Friday at 8 p.m., Saturday at 2 p.m. & 8 p.m.; Sunday at 1 p.m. & 7 p.m. Bass Concert Hall at 2350 Robert Dedman Drive on the UT campus will be the site of the musical shenanigans. Broadway in Austin and the crew at Texas Performing Arts always do a first rate job with each production.

Priscilla Queen of the Desert The Musical will star Wade McCollum (“Tick/Mitzi”), Scott Willis (“Bernadette”) and Bryan West (“Adam/Felicia”) as the trio of friends, on a road trip of a lifetime, who hop aboard a battered old bus searching for love and friendship in the middle of the Australian outback and end up finding more than they could ever have dreamed. Joe Hart stars as “Bob.” With over 500 dazzling 2011 Tony® Award-winning costumes, Priscilla Queen of the Desert The Musical features a hit parade of over 20 dance-floor favorites including “It's Raining Men,” “Finally” and “I Will Survive.” The new musical opened on Broadway to critical acclaim on March 20, 2011 at the Palace Theatre. We love thatThe Hollywood Reporter called Priscilla “funny and fabulous! Joyous entertainment with eye-popping visuals and unexpected heart!.” 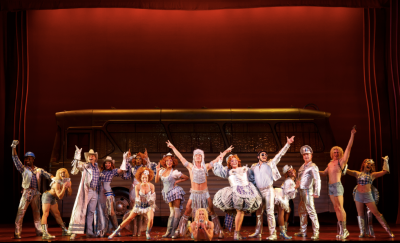 Tickets start at $30. Tickets on sale and are available at the Bass Concert Hall box office, all Texas Box Office Outlets, by phone at (512) 477-6060 or online athttp://www.broadwayinaustin.com. For groups of 10 or more, call toll free at (877) 275-3804 or e-mailAustin.groups@broadwayacrossamerica.com. Recommended for ages 13+ due to explicit language and mature situations.