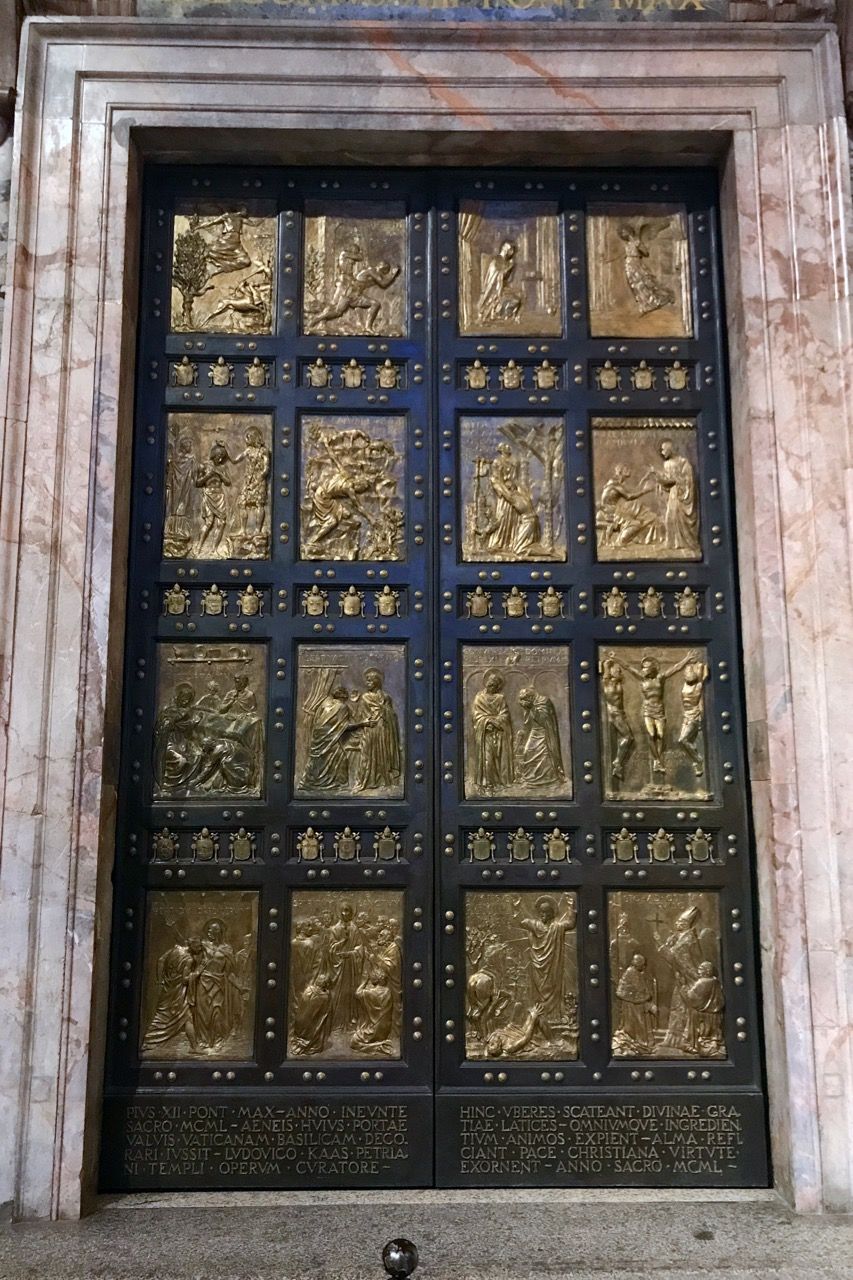 I just love doors, don’t you? In fact, I love all kinds of doors, shapes, materials, and the design of them. And, the doors of the ages. Doors, you see, are really portals. They are entryways of transformation that lead us into a world of both old and new energies. Beyond that space, every door has its own story, whether it is a historic site, a church, or an elaborate social event (prompting the thoughts: where does it lead to, what will I experience, do I stay or will I leave?)...from ancient history to now.

In the history of mankind, there are many mesmerizing door stories. The history of doors date back to the ancient era of Egypt. The first records we have of them, ancient hieroglyphics, illustrate that there were painted versions on doors on the Egyptian tombs. These ancient doors were simple slab of wood hanging on hinges, since there was no fear of warping, due to the dry and hot weather of the desert. The Egyptians also used a false door, that was placed in the tombs, that led to nowhere. These doors were known as the doors to the afterlife.

All doors can have their own magical story...even yours. They represent beginnings and endings that you can enter and exit at will. Do you open it or do you close it? Doors are all symbolic and can represent decisions, discoveries, opportunities, and goodbyes. They have a magic about them no matter how elaborate or simple.

Throughout our lives we come upon many doorways and thresholds. We encounter many beautiful doors that were built centuries ago, some still remaining. It is almost impossible to choose for this article, so I have chosen these...

One of the world’s most famous doors is in our own backyard...in Washington D, C. It is the 17-feet high bronze doors that have series of ornate cravings leading to the rotunda of the United States Capitol. They depict scenes from the life of explorer Christopher Columbus.

Another is the Holy Door in Saint Peter’s Basilica in Rome. This sacred door is normally bricked up and only opened on special years, known as jubilee celebrations. They look rather modern now, since these great bronze panels have been replaced by wooden ones in 1949 for preservation reasons.

The world’s largest door was installed in the world’s largest building as a part of NASA’s Vehicle Assembly Building located at Cape Kennedy, Florida. It stands 456-feet tall to accommodate the 38-story rockets that have to be held in upright positions. In fact, it takes a full 45 minutes to open and close these massive structures. That’s a bit of trivia to know when you watch the next launch on television.

Two internationally famous doors that have been in the news over the last year are the Portal doors depicting the Last Judgement are in Paris in the Notre Dame Cathedral that was damaged by the fire in 2019, but is now under repair. Another set of doors is at 10 Downing Street at the entrance leading to the headquarters and residence of the Prime Minister, Boris Johnson. The door, solid black, has a large brass knocker and high on the door, with a white painted number 10. You’ve probably seen it many films, written in books, photos, on television, and also, often in political interviews.

So many doors, so little space. One door has a delightful story you may not know, but many women can identify with. It’s the Red Door made famous by the beauty queen, Elizabeth Arden, who paved the way for the countless spas and cosmetic industries to follow (she was into self-care way before the others). In 1910, Arden opened her first beauty salons on Fifth Avenue in New York and made an iconic statement with her red. painted door (as well as her iconic perfume, Red), all of which became her trademark as similar as the Coca Cola and the Singer sewing machine were to the world. Today, there are still Red Door salons all over the world.

Like many doors, the Red Door has a story of a deeper meaning. Arden’s intense rivalry with fellow beauty magnate Helena Rubinstein (the European-born) expert who came to the U.S. in 1915 and set up a salon just seven blocks away from Arden (but with no red door at the time). The battle began, as rumor has it, when Arden declared war by painting her door Red, a warrior color. The two never met, nor referred to the other by name. The Tony Award-nominated Broadway musical War Paint that ran recently was based upon their rivalry and won four Tony nominations. Every door has a story the rivalry, continued beyond their deaths, as their empires continue to grow. Beauty is power.

Everything in the Universe resonates and vibrates at its own frequency, so the next time you approach a space blocked by a door, remember that the space has a story. So, open it like an opportunity or new experience, or, close it as a decision or finalization. Go ahead, open the door to your own story.