PEDAL TO THE METAL

As the steam builds for November’s Formula 1 weekend, the heat is on and it turns out that Godstone Ranch Motorsports(GMS), a Texas-based 501(c)(3) organization that races the GRAND-AM circuit to raise awareness and funds for select charitable organizations, is bringing its new Ferrari 458 GT Grand Am. Called the “HEART Car”, it will appear at Formula Expo™ June 16 and 17 at the Austin Convention Center.

As a Gold Sponsor of the debut event presented in partnership with Circuit of The Americas™ (COTA), Godstone will exhibit the new HEART Car, sharing the stage with its charitable focus,American Heart Association of Austin,and a Formula 1Ô Ferrari provided by Risi Competizione/Ferrari of Houston.

The even more cool part is that racing all-star Davy Jones, GMS’s celebrity driver, will be on hand signing autographs and sharing race stories along with the full GMS team, John McCutchen, professional driver and vice president at Hunt Construction Company, his wife, Karen Garrett, GMS founder and acclaimed sculptor (both of Dallas), Mica Mosbacher of Austin, director of off-track events and Honorary Consul General to Iceland, and Heart Ambassador, Ally Smith Babineaux, dubbed the “Bionic Bride” by People magazine. 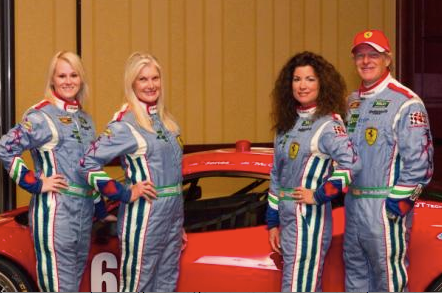 “We’re honored to be working with the American Heart Association’s Austin chapter and Ferrari to put the HEART Car on the track and raise much-needed funds for the fight against cardiovascular disease,” stated Mosbacher, team spokesperson. “We couldn’t ask for a better forum to launch our new partnerships and share our mission than the Formula Expo.” Mosbacher is also a member of the COTA host committee.

Interesting to note is that this is the only Texas-based non-profit, and one of the few worldwide, to use professional motorsports racing to raise awareness and funds for select charities, GMS recently joined forces with the Austin chapter of the American Heart Association. It’s their second non-profit alliance geared toward heart health. For nearly two years, GMS raced to benefit the Texas Heart Institute and made impressive finishes at races including the Rolex Grand Prix in Miami and the 50th anniversary of the Rolex 24 at Daytona in 2012.

In addition to renowned sports car driver Davy Jones, Ally Smith Babineaux, the Bionic Bride™, who experienced a well-documented, dramatic battle with cardiomyopathy before, during and after her wedding at the age of 22 in 2010, will also be at the GMS exhibit. The Godstone racing team is preparing for its next big race at the Watkins-Glen InternationalSports Car Challenge on July 1, in New York. The plan is for Jones to drive the HEART car with GMS co-founder McCutchen; it will be the first time either has raced Ferraris.

GMS partners Ferrari of Austin and sister location, Ferrari of Houston, proudly display both the HEART Car and the Formula 1 Ferrari. For more information visit godstoneranchmotorsports.com