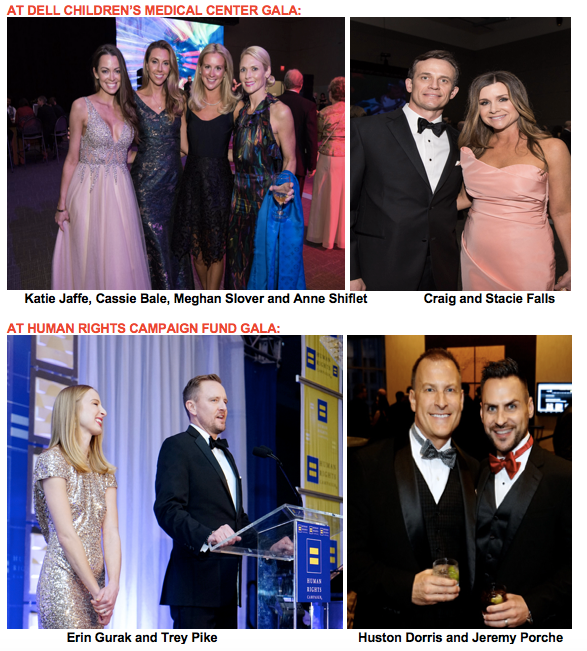 We all know Austin is a very diverse, charitable and social city with lots to do. Recently, the city had the good fortune of having not one, but two must- attend galas on the same night. We were lucky to be along for the ride for two great, annual galas: Dell Children's Medical Center and HRC Austin. Each of neared or exceeded a thousand attendees with both having a mix of new and familiar faces. Want to know who was seen on the scene? Here’s a look...

WHO: Over 1,000 donned their Saturday finest black-tie for a night of revelry, fun and most important of all a very worthy cause.

VIBE: The well-heeled crowd with a mix of suits, tuxedos and ballgowns started their evening with cocktail hour and followed with a dinner and program. The live auction and fund a dream (which is where you can make a cash donation that funds a specific need) alone raised over $800,000. The festivities continued well into the night with dancing and a casino night.

CAUSE: The event chaired by Craig and Stacie Falls raised a record $1.6M for Dell Children's Medical Center which provides world class medical care to the children of Central Texas.

WHO: A record setting 900 men and women with a great blend of community leaders and VIP's including Austin mayor Steve Adler.

VIBE: The creative black-tie crowd was on full display as tuxedos were often given an added layer of oomph with velvet sportcoats that perfectly complimented the cool winter night. The evening began with a VIP reception on the JW Mariott Terrace. After the cocktail hour, the action moved inside for the evenings program which featured words from Mayor Adler, HRC President Chad Griffin and a showstopping performance by Milck who brought the house down with a beautiful rendition of the song Quiet. The festivities continued with an after party that continued well into the night.

CAUSE: The event, chaired by Erin Gurak and Trey Pike raised funds for the Human Right Campaign, a nationwide organization of over 3 million members which seeks to end discrimination of LGBTQ people so they can be embraced as equal members of society at home, work and in every community.

Two great parties that showcase the diversity and philanthropy of Austin. One fantastic night we will not soon forget.