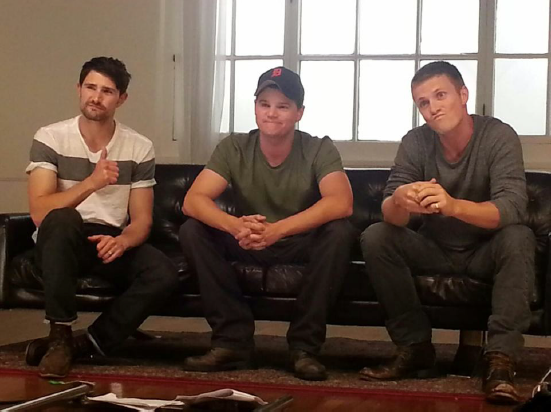 (Poto: The actors of Thunder Road)

Now through August 8th across Texas you can see actors Matt Dallas (Kyle XY), Charlie Bewley (Twilight Saga, Like Crazy) and Steven Grayhm (White Chicks), the latest production team turning to Kickstarter to aid in the development of their script, Thunder Road, tentatively scheduled to shoot in Detroit early next year. They even have a concert event in their honor in downtown Dallas on Wednesday, August 7th.

Why all the hoopla? Thunder Road is a no-holds-barred account of post-war life with respect to the conflicts in Iraq and Afghanistan. "There is no movie out there for this generation's soldier which truly explores the psychological repercussions of life after war the way The Deer Hunter and Coming Home did for their generation. Thunder Road will unveil the hidden truths and unanswered questions for the masses," says writer Steven Grayhm, who together with Dallas and Bewley head Astoria Entertainment.

In development of this voyeuristic glimpse into military life, the team has been gathering hundreds of accounts from the veteran community. "This a movie about the people, for the people - a community of veterans which make up 15% of the population, not to mention their families, friends and support networks, all of whom are affected. Ultimately, we are all affected. We just don't see it. This is why Thunder Road, as educational as it is entertaining, is so important."

Kickstarter.com has been a hot-topic recently with high-profile successes such as Zach Braff and Veronica Mars blowing away their respective dollar amount goals. The team behind Thunder Road are also hitting big and are rumored to have set a target of $750K for their Kickstarter campaign. Without the benefit of a mass existing audience, which were so crucial in the Braff and Veronica Mars campaigns, Bewley had this to say about their ambition: "There are 23 million veterans in the USA and over 5 million in the UK - millions more in the remaining allied forced worldwide. That's an audience who want their story told. These people are thanked for their service and asked to be quiet about the truth of their challenges post-war. Someone needs to speak up. Thunder Road is that voice."

July 24th saw the launch of the Thunder Road Kickstarter campaign. Astoria will have 40 days to raise the $1 million target. The team are planning a nationwide campaign in sync with their crowd-funding time period when they will be peppering national and regional media to spread the word. Expect to hear plenty about their journey and be sure to follow their progress at https://www.facebook.com/pages/Thunder-Road-Kickstartercom-Campaign-JulyAugust-2013/131484650262824?ref=hl