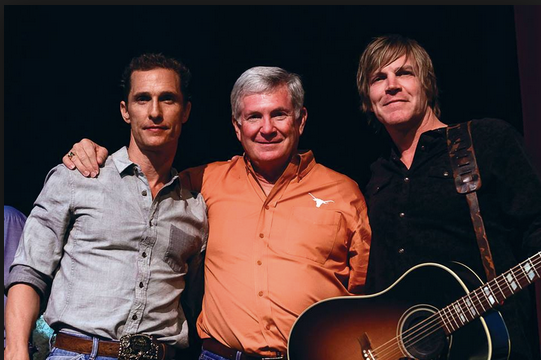 Here’s a riddle: What do Academy Award-winning actor Matthew McConaughey, legendary football coach Mack Brown, and ACM award-winning singer Jack Ingram all have in common? Besides representing Texas in the best of film, sports and music, this power trio has come together to create MJ&M, a two day blast of special events this April 16 and 17. Whether you’re all about music, golf, or fashion, you won’t want to miss this springtime celebration. You may just rub elbows with some of the hippest and most influential members of the Texas social scene.

If you like energetic, patriotic, and even rambunctious concerts that will get you out of your seat to dance and sing along, you can’t miss Toby Keith’s headlining performance at ACL Live on April 16. He puts on an incredible show, and he’s been awarded musical distinctions in Nashville as well as New York City to prove it (not to mention millions of album sales).

He’ll be joined by Grammy Award-winners Little Big Town, an upbeat contemporary country group that will have you smiling and clapping to the beat. The following night, Jack Ingram & Friends will headline a special program on April 17 at ACL Live with Jimmy Kimmel, featuring Willis Alan Ramsey, Holly Williams, Christopher Coleman and Butch Walker.

Fashion aficionados will flock to the W Hotel, where MILLY designer and founder Michelle Smith and Neiman Marcus will present a contemporary NYC-style show in one of downtown Austin’s chicest hotels. Meanwhile, golfers can take a swing at the Celebrity Classic Golf Tournament at Spanish Oaks Golf Club, a beautiful setting to tee off into the lovely spring weather with some of Austin’s finest golfers.

MJ&M kicks off on Thursday April 16 with the Gala, Live Auction, and the Little Big Town concert followed by headliner Toby Keith at ACL Live. On Friday April 17, MJ&M will present the Celebrity Classic Golf Tournament and the MILLY & Neiman Marcus fashion show, followed by the Jack Ingram & Friends concert at ACL Live.

Tickets are available as of Friday, February 27. To purchase tickets, or for more information about Mack, Jack & McConaughey, visit www.mackjackmcconaughey.org.

Every year, MJ&M supports non-profit organizations that share the founders’ goal to empower kids. This year MJ&M is excited to announce that the funds raised will support The Rise School of Austin, Just Keep Livin Foundation, HeartGift, CureDuchenne, and Dell Children's Medical Center of Central Texas.