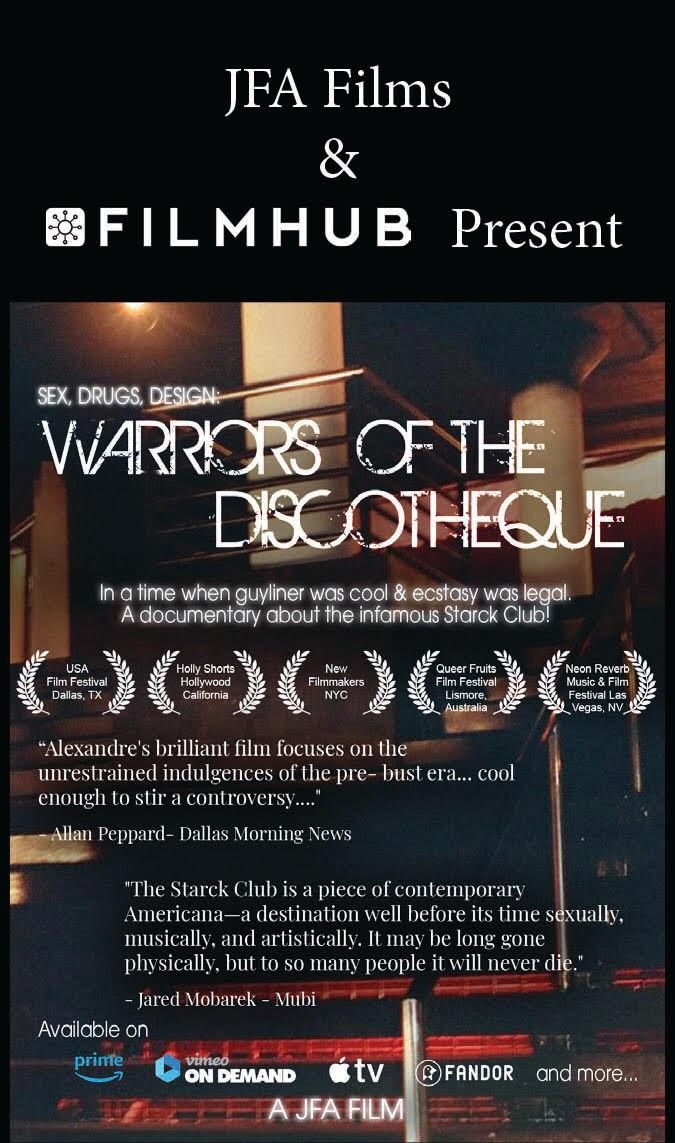 THEN & NOW: THE WARRIORS OF THE DISCOTHEQUE DOCUMENTARY ABOUT THE STARCK CLUB

In the past, there were clubs so exclusive that one couldn’t have imagined it would spawn chic venues like it in the future decades. And to think it all started in Paris, New York...and Dallas. Dallas? French designer Philippe Starck created a sensation in the mid-80s by creating the first European-style nightclub in Dallas, named appropriately, Starck Club. It took the city by storm, as well as the state because it was in complete contrast to the ostentatiousness of the times. Then something happened. Philippe Starck brought cool and clean to what was, at that time, a very cluttered state. From his five-minutes-from-now contemporary vision sprang a streamlined, white warehouse club that the world, and certainly not Texas, had ever seen before. There was the night Grace Jones came in riding an elephant during the 1984 Republican Presidential Convention. And, the night Prince had a party after he performed at nearby Reunion Arena. Everyone has a story about the Starck Club. We caught up with the producer of the Warriors of the Discotheque documentary, Joseph Alexandre to learn more about this look back at how the first designer nightclub came to be, as seen in his film:

Lance Avery Morgan: Why were you compelled to tell the story about the Starck Club?

Joseph Alexandre: I was compelled to do the documentary primarily because it left an indelible imprint on me as a kid. Being originally from New York, but too young to do the clubs, I’d vicariously live through my uncle’s stories of him going to Studio, Xenon, Area, and other great clubs of the day. He worked on Wall Street and was a great tennis player and he loved meeting McEnroe and Geralitus back in the day. So, when we ended up in Texas (my dad was a retail executive, so we moved around a bit), I’d heard about this new kind of Euro club called the Starck Club couldn’t resist.

It was a Sisyphean task just finding the place at 703 McKinney (where the address was supposed to be was just a dirt path going under the freeway). It made no sense, so I kept circling around. I finally drove down that dirt path and voila, I was in the parking lot of The Brewery building which housed the actual Starck Club. I discovered later it was easier to come from Stemmons freeway and take the Commerce exit since it was more clearly marked. Moreover, it was unlike any club I’ve ever seen since. I’ve been in Los Angeles for some time and several other major cities and not a single night club comes close, in any way shape or form, particularly not design wise.

LAM: Why do you think Texas was the original spot for Phillipe Starck to choose for his club?

JA: How Philippe came to design the club in Texas is an interesting matter of some debate. It seems primarily that one of the key investors, Christina DeLimur (a.k.a. Sita) had connections in France that lead to hiring Philippe. More specifically, with a couple of guys named Chuck and Dino who were early investors, it seems Dino knew Philippe on a personal level and that lead Blake Woodall to hire him to create the club. Conversely, for Philippe, it seems he was concerned about the Soviet Union invading Afghanistan and possible turmoil in Europe. So, the opportunity to come to the U.S. was very appealing to him, as well as to expand his brand to a market like Dallas in the U.S. and eventually to places like Manhattan and Miami.

LAM: What did you learn from helming the doc that surprised you about the subject matter?

JA: I think the thing I found most surprising about this project was how seemingly little interest there was in Philippe Starck’s first major design in the U.S. simply because it was in Dallas. In one case, a reviewer on Amazon gives it a low rating and simply says ‘it’s in Dallas’ as if that alone should be a disqualifier. I was also kind of surprised as to the competitive nature that ensued over the legacy of the Starck Club. I took a lot of heat simply because I did not have Blake Woodall in the project, even though I tried many times.

Having done this project in phases by doing a little teaser, then a short film, then the feature, I knew of this kind of resistance, or lack of interest in the Starck Club ,because of proximity and other factors. Even though it was the birthplace for EDM, rave and Ecstasy, it was a tough sell all the way around. My feeling about the competing projects in this case was we would need all the attention that we could get. Ultimately though, having written a TV pilot on the Starck Club that’s getting traction, as well as the film, the jury is still very much out.

LAM: Joseph, congratulations on your team’s and your talents to make this happen and to tell the real story behind a legendary pop cultural phenomenon.

For more information to view this documentary, visit: