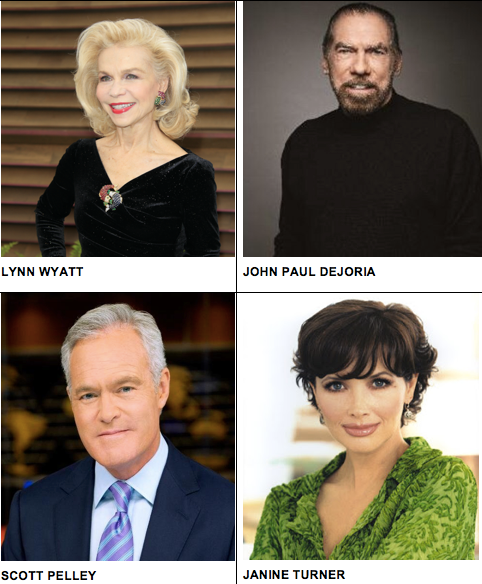 You know how much we love our favorite high-performing Texans. So it was a room full of Texas pride today at a special luncheon hosted at the Tobin Center for the Performing Arts in San Antonio. The Texas Cultural Trust announced today the 2017 honorees for the biennial Texas Medal of Arts Awards, taking place February 21-22, 2017, for the first time ever at Texas Performing Arts at the University of Texas at Austin. In its ninth biennial year, the Texas Medal of Arts Awards is the Texas Cultural Trust’s signature event and the state’s most prestigious arts gala, honoring amazing Texans who have made powerful contributions to the arts here at home and around the world. This event celebrates the state’s legendary artists, entertainers, and arts patrons with a series of events, including a Stars of Texas Brunch at the Governor’s Mansion, a star- studded awards show with special musical performances, and a gala dinner.

“The Texas Medal of Arts Awards recognizes those whose artistic talent and generous philanthropy have shone a spotlight on the vibrant artistic culture of our state,” said Texas Cultural Trust Executive Director Jennifer Ransom Rice. The Awards are co-chaired by Peter Holt, former Chairman and CEO of Spurs Sports & Entertainment and Holt Cat, and Guillermo Nicolas, an avid arts patron, Texas Cultural Trust board member, and president of 3N Group, LLC. “Peter and I are so proud to have the opportunity to co-chair the spectacular 2017 Texas Medal of Arts Awards, and we look forward to an outstanding celebration of these worthy honorees,” said Guillermo Nicolas.

To date, the Texas Medal of Arts Awards has presented 99 medals to 105 Texas legends and luminaries who have achieved greatness through their creative talents, as well as those whose generosity has opened doors to artistic opportunity for Texans of all ages. The Awards spotlight the impact of the arts on the state’s economy and the organization’s children’s education, preserving unique and proud Texas culture. A limited number of sponsorships and tables are still available. To become a sponsor or purchase a table to the Texas Medal of Arts Awards, visit tmaa@txculturaltrust.org or call512.478.5289 and for more information, contact www.texasmedalofarts.org.