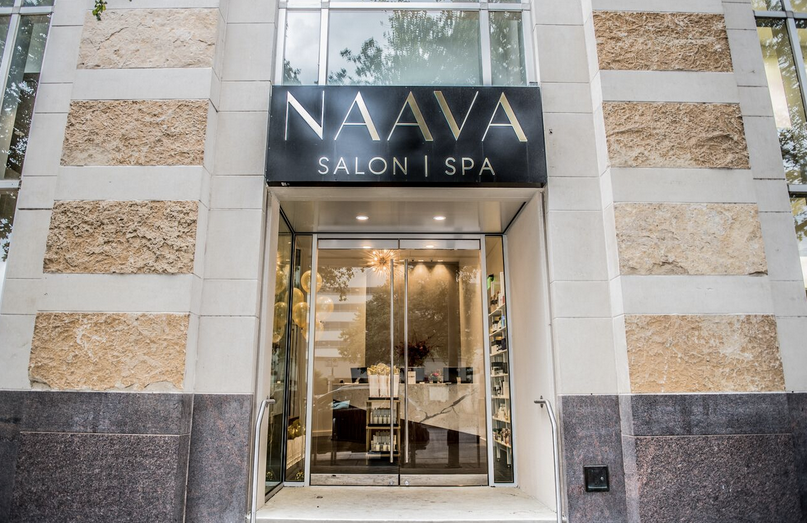 TREAT YOURSELF TO BEING SPECIAL: AT THE CHIC NAAVA SPA IN AUSTIN

BEAUTY IS AS BEAUTY DOES

NAAVA, founded in 1973 as AZIZ Spa and Salon may become your favorite new destination for beauty – and handsome – treatments, as we learned when we popped in for a terrific massage recently. It was an amazing experience and one we will savor having again soon.

You may know that NAAVA is the oldest day spa in Austin. The current owners bought AZIZ in 2010. Their secret? They are husband and wife teams: Steve and Vaida Chodniewicz and Natalie and Josh Chodniewicz. Josh is the former co-founder and CEO of web-based business, Art.com and is currently currently helming NAAVA. The owners opened a second location in the Arboretum in 2012, and changed the name to NAAVA in 2014, with a second hit location on their hands.

The new downtown location at 300 W. 6th street opened in 2015 and it’s been a hit ever since. The venue boasts a whopping 6,200 square feet, making it the largest full service salon and spa in a downtown office building. Plus, it also is the only LEED certified energy efficient salon in Austin. How cool is that?

It was just selected for "Salons of Distinction" in the national Salons of the Year contest by Salon Today magazine, and voted the second runner up nationally for "Top Salon of the Year- 2016" and was featured in the June issue. NAAVA was also named "Top Spa of Austin - 2016" by Top Choice Awards earlier this year.

Looking for luxe? This luxury salon and spa is outfitted with marble countertops and clean, modern furniture, and has two locations: downtown and the Arboretum. It currently employs about 60 people in Austin. NAAVA can accommodate large groups with a minimum of 16 salon chairs (downtown boasts 28) and eight manicure and pedicure stations (downtown can accommodate 12). Both locations have eight spa treatment rooms for facials and massages. It is located at the below locations and more info can be found at https://www.naava.com.