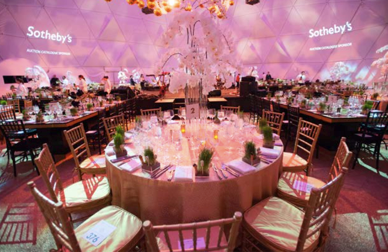 What’s not to love about TWO x TWO for AIDS and Art Gala, the splendid yearly fête that’s a mainstay of Dallas’ social calendar? Last year’s event was an incredible evening attended by some of the most influential players in the art and philanthropic scenes. Now, we are proud to report the announcement of the Chairman and Honored Artist of the upcoming 17th annual TWO x TWO for AIDS and Art in the fall of 2015.

Cindy and Howard Rachofsky, hosts for the annual TWO x TWO for AIDS and Art, have announced Nancy C. Rogers as the 2015 Gala Chairman and Ellsworth Kelly as the recipient of the 2015 amfAR Award of Excellence for Artistic Contributions to the Fight Against AIDS. Rogers is recognized as one of the most generous patrons of non-profit organizations throughout the Dallas area.

Ellsworth Kelly is among the world’s most important abstract artists with a career spanning more than six decades. His paintings, sculptures, and works on papers place an emphasis on pure form and color, suppressing gesture and creating spatial unity.

Kelly is well represented in Texas with hundreds of works in public and private collections throughout the state, including the Dallas Museum of Art, the Museum of Fine Arts and the Menil Collection in Houston. Recently, the Blanton Museum of Art announced plans to construct Kelly’s Austin, a stone building with luminous stained glass windows, conceptualized as a sanctuary for meditative reflection.

Since its inception, TWO x TWO for AIDS and Art has raised more than $52 million in support of essential AIDS research at amfAR and for the Contemporary Art Acquisitions Fund at the Dallas Museum of Art. The 2014 event raised a record-breaking $7 million.

Drawing prominent artists, art collectors and philanthropists from around the world, the annual TWO x TWO black-tie gala is part of a week-long series of events. It is the largest U.S. fundraiser for both amfAR and the Dallas Museum of Art. For more information, visit: http://www.twobytwo.org