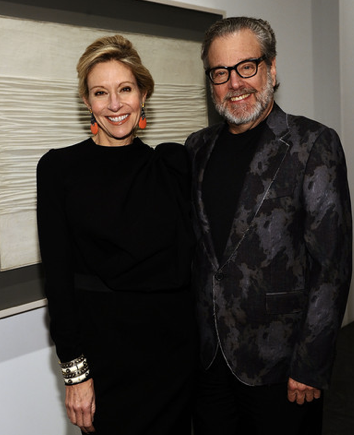 Some call it the best event of the year in Texas. We agree. The news? Cindy and Howard Rachofsky, hosts for the annual TWO x TWO for AIDS and Art, have announced Neiman Marcus as the Title Sponsor for the 14th annual event scheduled for October 20, 2012. A dinner hosted by Claire Smith, Head of Spirit Creation and Mixology, Belvedere Vodka, a Gold Sponsor of TWO x TWO, celebrated Neiman Marcus and TWO x TWO hosts Cindy and Howard Rachofsky. The announcement event took place on Monday, April 23 at Abacus. Belvedere also used the occasion to introduce its newest vodka made to drink - Lemon Tea. Working with celebrated Chef Kent Rathbun, Claire developed a vodka and food pairing menu which delighted the room of guests.

Since its inception, TWO x TWO for AIDS and Art has raised more than $34 million in support of essential AIDS research at amfAR and for the Contemporary Art Acquisitions Fund at the Dallas Museum of Art. We love that.

"We salute the passion, dedication and hard work of Cindy and Howard Rachofsky on behalf of amfAR's AIDS research and the Dallas Museum of Art," said Jim Gold, President, Specialty Retail, The Neiman Marcus Group.

“Last year was a landmark one for TWO x TWO,” said Cindy Rachofsky. “Along with our 2012 chair Amy Phelan, we wanted to develop a new playing field which would springboard us to a new level of fundraising. With Neiman Marcus as our Title Sponsor, we are confident that target goal can be achieved—and even surpassed.”

There are so many heavy hitters attached to this event that has become a fundraising machine. The 2012 TWO x TWO sponsor list (to date), which was revealed at the dinner includes:

Other big news? Dallas collectors Lindsey and Patrick Collins have been selected as Art Chairs for the 2012 event. Richard Phillips will be the recipient of amfAR’s 2012 Award of Excellence for Artistic Contributions to the Fight Against AIDS at the 14th annual event in October 2012. He has supported TWO x TWO over the years, most recently with a remarkable large scale painting of actress Lindsay Lohan at the 2010 Dallas event.

Drawing prominent artists, art collectors and philanthropists from around the world, the annual black-tie gala is part of a week-long series of events. It is the largest U.S. fundraiser for both amfAR and the Dallas Museum of Art. An eagerly anticipated event that quickly sells out, the gala benefit features a seated dinner for 450 guests with both a live and silent auction of major works of contemporary art and unique luxury items.

Renowned artists Robert Rauschenberg, Ed Ruscha, Julian Schnabel, April Gornik, Joel Shapiro, Cecily Brown, Tom Friedman, Elizabeth Peyton, Jim Hodges, Peter Doig, Christopher Wool and Mark Grotjahn have been honored. During the live auction at the 2011 event, artist Mark Grotjahn’s piece went for a record-breaking $1 million. All of this is thanks in part to Barbara Buzzell The Buzzell & Co., the most glam PR firm in Dallas.

For more information on the event, visit www.2x2online.org.