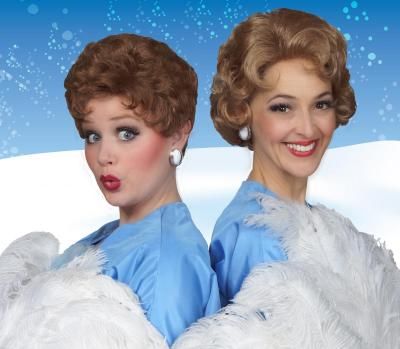 ZACH has done it again. Austin’s Theatre and Texas’ longest running theatre, in the first-ever season in its new Topfer Theatre, presents the Austin premiere of WHITE CHRISTMAS, which is based on the Paramount Pictures film written for the screen by NORMAN KRASNA, NORMAN PANAMA, and MELVIN FRANK. With music and lyrics by IRVING BERLIN, book by DAVID IVES and PAUL BLAKE, musical direction by Allen Robertson and directed and choreographed by NICK DEMOS. Now that’s pedigree.

WHITE CHRISTMAS is a film we watch every year. Always have, always will. This year our holiday dreams have come true with the beloved movie musical turning ZACH into a winter wonderland.

In this melodious new stage adaptation, two former Army buddies turned famous song and dance men find love with two singing sisters in a snowy Vermont Inn, all the while singing Irving Berlin classics like "Happy Holidays", "Count Your Blessings", "Blue Skies," and "I've Got My Love to Keep Me Warm” and “Something Happens When You’re Dancing, among many others. Frankly, it is a must-see on your family's holiday wish list.

ZACH’s Producing Artistic Director Dave Steakley tells us, “The most popular holiday song of all time begins with the lyrics ‘I’m dreaming of a …’. With this season’s focus on dreams, WHITE CHRISTMAS had to be on the season. In December we welcome the most audience members at ZACH, and for the first holiday in the Topfer Theatre I selected a musical that is great for families, and has not been produced in Austin. This is a big show performed in the intimacy of our 420-seat theatre; the joy from hearing those great Irving Berlin songs performed live will permeate the room and every heart. I guarantee the forecast will be snow for every single performance in the Topfer.”

Champagne Opening and Press Night is Thursday, December 13 at 7:30 p.m., followed by a reception with the stars of show