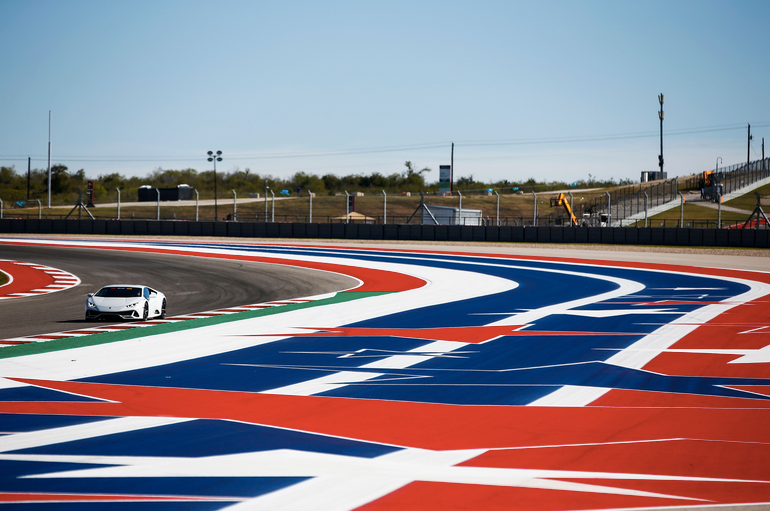 Attending a Formula 1 race is on any automotive enthusiast’s bucket list, under any circumstances, a real motorsports fan will drop everything just to for a chance to see the fastest men on four wheels, live and in person. But to be invited to take in the spectacle from the Paddock Club Suites of Pirelli and Mission Winnow Ferrari, that is next level. I had even been invited to play in the Charity Golf Tournament with the Who’s Who of Formula 1. Naturally, I made myself available for the weekend and arranged to borrow a new Alfa Romeo for the trip down to Austin.

The race, the United States Grand Prix, held at Circuit of the Americas (COTA) outside of Austin, Texas. Host to the USA’s only Formula 1 Race since 2012, COTA was purpose built for the Grand Prix, the $400 million dollar track is draped across the rolling hills, just 15 miles from the Texas Capital. It’s a loud and aggressive track, known for its fast straights, complex corners, and bold red, white, and blue track artwork that features plenty of Texas stars.

I had to be at the golf tournament on Thursday, which meant I needed to find some golf clubs. I had lost my previous set when I moved to Texas, they were very rare MIZUNO-Pininfarina clubs, I have never found another set for sale. I hadn’t played since losing them, so I was rusty to say the least. I went to a local pro-shop and picked up a new golf bag, some balls, and tees. A friend loaned me a set of clubs. Fully equipped, I at least looked the part when I arrived at Fazio Canyons at Barton Creek for the charity tournament. I was told I would be playing with Carlos Sainz Sr., Zak Brown, and Mika Hakkinen...so I was in good company.

The tournament was benefiting the Susan G. Komen foundation, and I headed to the driving range to warm up and discovered that I could hit my irons, but these woods wouldn’t be doing me any favors. This being a Texas Scramble each team started at a different hole, while my driving was abysmal, my short game secured the foursome some birdies, thus earning me first putt at every green.

The Friday would be my first day at the track with Pirelli, I was given several different lanyards with passes that would allow me to access the pits, the paddock club, and the paddock itself. Pirelli was also sure to outfit me with a Pirelli hat and puffy vest; branding is key and technically I was invited as an “influencer” so I may has well dress the part.

Today would just be practice and the teams were nervous about the cool weather and how it would affect the tires. After a tour of the Pirelli tire fitting area, suite, and lunch, I was given another set of lanyards, that read Pirelli Hot Lap. I would be taking a spin around the track with a professional driver in a Lamborghini Huracan EVO. After a quick briefing and picking out a helmet, I lined up on the grid and waiting for the 630 hp Huracan to pull up for my tour of COTA in less than two minutes.

Saturday a group of journalists and celebrities would be joining us as part of the Pirelli suite, including adventurer Jim Clash, TV Personality Richard Rawlins, and YouTuber Parker Nirenstein. The rest of the suite was filled with Pirelli employees, business partners, and clients. Greeted at the door with a mimosa set the tone to the kind of service one can expect in the Paddock Club, the room was abuzz with activity because we would soon be visited by Red Bull Racing driver Alexander Albon, who would talk about the track and his passion for racing. Formula 4 cars were on the grid, which particularly interested Rawlings as his Gas Monkey Energy drink was sponsoring a team fielding four cars.

The F4 race underway we headed down to the Aston Martin/Red Bull Racing garage directly below us for0 a private tour. More akin to a fighter jets than cars, the team was busy prepping Albon’s and Verstappen’s Astons for practice. Moving out in the pit lane we learned more about the tire technology and strategy for COTA from one of the Red Bull Racing team members. Celebrities like Michael Douglas and racing legend Mario Andretti were wandering around the pits, some members of the group wanted to get photos, I opted to return to the suite and watch the second F4 race of the day. Some of our group were staying after the race to watch a concert at the track, but I opted for a nice dinner back in downtown Austin.

On Sunday morning some of our group looked as if the previous night’s cocktail parties had hit back, while the entire crew from Gas Monkey left early to head to Las Vegas for the SEMA show. After collecting a whole new series of lanyards, we shuttled over to the track in our black Chevy Suburban. Traffic for the race was backed up for miles, with every farm field and front yard within walking distance to the track being utilized for parking. I must admit it was nice to see the track full, most of the events I cover at COTA are so poorly attended that you might not think a major motorsports series was racing, but this is Formula 1, and COTA is sold out.

A representative from Pirelli asks if I would like to ride in a trailer that will be pulled around the track in the pre-race driver parade, the answer is of course, yes. Jim Clash the adventurer joins me, and we take a lap waving back to the crowd who has no idea who we are; yet they very excited to see us. The drivers are being driven around in classic cars, mostly vintage Corvettes, as we return to the paddock, the rest of opening ceremony gets underway, the Dallas Cowboy’s Cheerleaders, UT Austin band is playing, and fighter jets fly over. The pits are flooded with celebrities like Matthew McConaughey, Jeff Gordon, Trevor Noah, and countless other athletes, musicians, and actors.

The race in full swing, I go next-door to the Mission Winnow Ferrari suite, where I get two more lanyards. Inside, it is what you would expect from Ferrari, clean modern furniture and a party like atmosphere. I chat with a new friend about Ferrari, the Mission Winnow motorsports program, and what is next for Ferrari. As I leave, they stop me to give me a swag bag that outfits me completely in Puma/Ferrari gear. Back next door at the Pirelli suite, the room has thinned out as some people have already left, the race is coming to a close with Valtteri Bottas taking the win, and Lewis Hamilton securing enough points to bring home the Formula 1 Championship for the sixth time.

As the cars pull into the winner’s circle, the media and fans in the pit flood the area around them, Champaign corks pop, interviews are given, and another round of dinners and afterparties awaits us back in downtown Austin. Going to a Formula 1 race for the first time was exciting, doing it with the incredible access was amazing, but now I just want more, with legendary tracks like Monaco, Suzuka, and Silverstone now added to my ever growing bucket list. Until next time at F-1 in 2020.