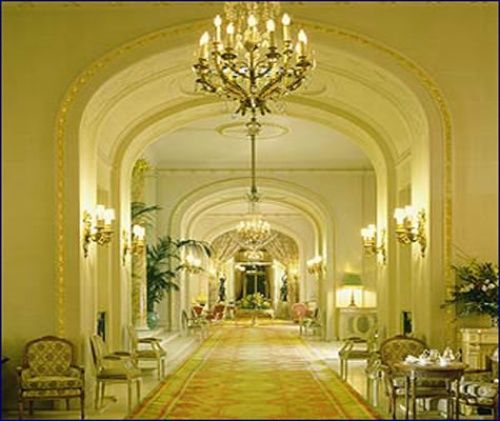 Shabby chic? More like regal elegance. Glamorous, over-the-top luxury is what you’ll find when you cross the pond to visit London and stay at its grande dame Ritz hotel. Tea for two, anyone?

London is one of the most chic cities in the world. Period. It may even rival Paris and Milan based purely on street style alone. And in London, style is serious business and it’s that way at the Ritz Hotel. From the moment you cross the threshold from the revolving door at the Ritz, its fabled existence lends itself to the feeling that time has stopped – or at least drastically slowed down. Suddenly you’re cavorting about as if you were in a Noel Coward play. Complete with a Cole Porter soundtrack. It may {feel} like time has stopped, yet the five-star hotel’s legend of representing the best of the best never has. With its French chateau-style architecture and Louis XVI furnishings, the hotel was created as, according to renowned hotelier César Ritz, “a small house to which I am proud to see my name attached.”

The Ritz Hotel in London is so legendary that many incarnations of its name have come into popular culture over the years. Think Puttin’ on the Ritz. A Diamond as Big as the Ritz. The native and visiting international aristocracy made it an instant hit when it first opened in 1906, and it has been star-studded ever since. Famed Russian ballerina Pavlova danced there. Charlie Chaplin needed 40 English Bobbies to escort him into the hotel from his throng of chasing fans during a visit in the 1920s. Eisenhower, Churchill and deGaulle conducted wartime summit meetings there. Broadway actress and movie star Tallulah Bankhead even sipped champagne out of her own slipper at the Ritz. How’s that for celebrity antics?

The hotel really is like a world unto its own. If one feels pampered there, it’s with good reason. The staff to guest ratio is about three to one, so every detail during your stay is attended to with promptness. Want to be unpacked upon your arrival? Not a problem. Desire some chocolates, a fruit bowl, and champagne awaiting your appearance? Consider it done. Five star service is abundant and a way of life for each employee in the hotel. Michael de Cozar, the Head Hallporter (concierge) explains, “I have been welcoming guests to The Ritz for over 30 years now and have formed friendships with families that span generations.”

And generations of the British certainly know about the ritual of tea time. That commitment carries over to the famed Afternoon Tea at The Ritz, an institution in itself served in the spectacular Palm Court. Birthdays are celebrated there. Proposals of marriage are made there. You’ll find tea served on fine Limoges china, with an array of 17 teas offered from silver-service tableware. A choice of finger sandwiches, freshly baked scones, jam, cotted cream and a range of pastries, all combine to make it an unforgettable afternoon. Michael Bentley, who used to run Claridge’s hotel and is now a consultant at the Ritz, joined us for our tea and exclaimed that he believes it to be the best tea service anywhere. So to enjoy the high tea, you’ll want to make reservations ahead, as it books up quite far in advance – about three to six months. While sipping both tea and champagne, Former prime minister Margaret Thatcher, in a head-to-toe powder blue dress ensemble, whisked by us. Ah, London and all its colorful characters seemingly at every turn. 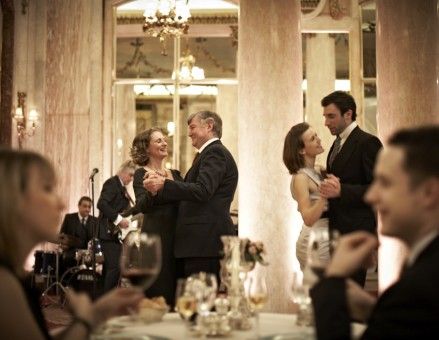 You will also find some characters in the very private Ritz Club downstairs. High rollers only need apply. It has a casino and some of the most beautiful rooms ever designed for any hotel. With the room’s themes, such as the Amber Room, and the Blue Room, ornate chandeliers and fancy finery are within arms reach at every turn. You’ll think you were at a salon party at Versailles. And if you’re in a gambling mood, hands start at about $100,000, which surpasses what you’d find even in Monte Carlo. Dinner in the club, as in the hotel’s main restaurant, is impeccable with every five- course meal being better than the one before it. John Williams, the executive chef told me, “I have always had a great love for The Ritz and for its time-honored traditions. The chef Escoffier and his forward-thinking methods and beliefs have influenced my entire career and it is a pleasure to be cooking in the very kitchens where it all began.” Williams’ staff is impeccable, too. Expect to see morning cutaways on most of the hosts in both the restaurant and the lobby. It’s easy to see why the dress code for patrons in all public areas is strictly enforced.

To match the public spaces, the private rooms and suites are decorated in full French splendor. A suite life indeed. My suite of rooms, swathed in gold brocade with Wedgewood blue accents, lived up to the hotel’s reputation for having only the best. I also learned that the hotel is about to celebrate a special birthday. I asked deputy chairman of the Ritz London and chief executive of The Ritz Club, Andrew Love about it, and he stated, “Yes, the Ritz is about to become a centurion. I’m asked what we are planning to mark this event, but like most grand ladies, we never like to give our secrets away. I can assure you however, there will be several exciting happenings to ensure that this grand ladies’ birthday is celebrated in appropriate style.” 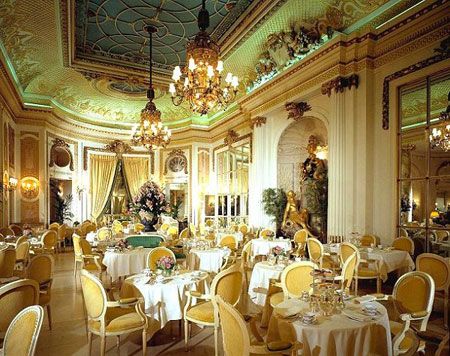 When 2006 rolls around, the Ritz will be ready for a grand year of celebration. “My colleagues and I have begun working on preparations for a program of festivities next year which have been designed to both celebrate the first 100, as well as the next 100 years”, attested Ritz general manager, Stephen Boxall. Part of top secret news is that they will kick off the year with a seven-course meal on New Year’s Eve that will include dinner and dancing, fireworks, exotic favors and more, for a mere £1906 (about $3000 dollars, but the year and the English pounds match in commemoration, of course.)

You can enjoy the orchestra quintet playing in the restaurant on Friday and Saturday nights. Everything from Strauss to Sinatra can be heard. This complements the pianist in the Palm Court lobby, Ian Gomez, who tickles the ivories, and if he likes you and knows where you are from, will play a personalized homage when you walk by. For a Texan like me, he played “Don’t Fence Me In.” I���m not sure it gets any better than that.