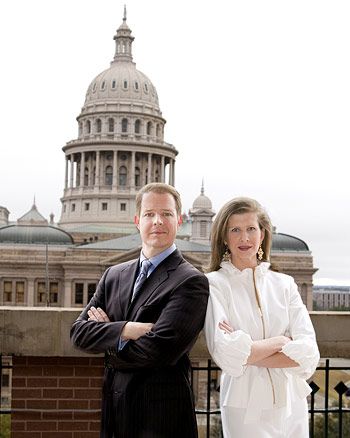 In a state that firmly believes that bigger is always better, the more extravagant the events, the more fabulous the company. Only we can give you an intimate insider’s look at one of the most memorable events in recent history—a surprise birthday party of epic proportions with a swinging Sinatra accompaniment.

Luck Be A Lady

Most of us don’t wake up one morning and decide, “I think I’ll throw a surprise once-in-a-lifetime birthday party.” Unless you are Andrea McWilliams. For her husband, Dean’s, 40th birthday, she wanted something spectacular. A powerful political lobbyist couple, the McWilliams’ work, play and travel together, so keeping a surprise gala a secret might have been the hardest part of the entire endeavor. “Life is about creating memories,” says Andrea. “The party was not only my gift to him, but it relieved Dean of the worry of planning. It was all worth it to see the look on his face.”

Dean’s look of utter astonishment when he entered the doors of the party was the result of more than a year of planning and to get the ball rolling, Andrea called longtime friend, event planner Victoria Hentrich, founder of Creative Consultants. “I loved working on this event with Andrea,” shares Hentrich. “I know how much this party meant to her and everyone who worked on the event was excited for the evening to happen. We worked hard and it was all done with lots of love for the McWilliams’.” The first obstacle was setting a date during a busy fall social season, so the theme was kept simple—black and white. Searching for a venue large enough to cater to several hundred invited guests proved a challenge, but confirming the Bob Bullock State History Museum as the location set the event in motion. Influenced by the Costume Institute Gala at New York’s Metropolitan Museum of Art, the party had high hopes to fulfill in its planning stages.

Transforming a cavernous building into an intimate setting reminiscent of a glamorous 1940s nightclub in a mere six hours is no easy feat, but, for Hendrich, it was all in a day’s work. First, the museum’s granite walls were swathed in black velvet to add to the black-and-white motif. A bandstand suitable for an 18-piece orchestra was put into place, with the guest of honor’s initials hanging over the stage, as well as multiple locations around the room from the façade of the 30-foot long bars and the eight foot ice sculpture that housed the shrimp bar, to the pocket square handkerchiefs handed to the male party guests.

The Look of Love

Thousands of red roses added to the warm and wintry atmosphere, some comprising arrangements towering several feet, others neatly set on the black velvet covered tables. A wide variety of appetizing food and drink perfectly complimented the grand affair. Guests indulged in creations from a sushi bar, courtesy of Ronald Chang’s Chinatown, while the shrimp bar, wine and cheese service was officiated by Rosemary’s Catering. Every party needs the right drinks and the Arista Winery in Sonoma Valley (Dean’s family owns it, so that was an easy phone call), devised an exquisite wine bar in addition to the other libations. Media tycoon Steve Hicks commented, “Parties of this caliber are normally in New York. It was wonderful to see such an elegant party in an environment that can be known for its shorts and jeans.”

Months before the celebration, guest received an elaborate save-the-date Lucite note, and later, an elaborate caligrahied invitation rivaling the menu of Manhattan’s famed eatery, the 21 Club. One visiting luminary, New York-based Wall Street Journal fashion editor, Teri Agins was more than impressed. “The elegance began as we strolled on the red carpet into that grand museum rotunda,” recounts Agins. “Never have so many guests looked so stunning in black-and-white, starting with the lady of the night, Andrea, who was most fetching in a black-and-white feather confection. The gentlemen looked so sharp in white ties, with those jaunty black-and-white pocket squares. With the orchestra creating a swanky mood, it felt like an old Hollywood movie.”

I Get A Kick Out of You

Socialite and tireless party star, Carla McDonald, agrees. “Andrea did an incredible job of transforming the space into a 1940s-style, dance-‘til-dawn nightclub filled with the state’s brightest stars and starlets,” says McDonald. “I kept thinking all night that this is what Ciro’s and The Mocambo must have been like during the heyday of Hollywood’s studio era and half expected to see Gable and Lombard fox-trotting around the dance floor.”

For the sublime women guests, Black Gilda-esque sheaths cut on the bias were popular, as were white gowns, some with matching 16-button opera gloves, as well as beaded and taffeta numbers that rivaled Cecil Beaton’s My Fair Lady black and white ball costumes. LaCroix, Chanel, Dolce and Gabbana and Derek Lam were just some of the designers represented. Truly a spectacle to behold, the glittering guests enjoyed each other’s company as much as they did the evening entertainment. “There was something special about the vibe at the party,” observes socialite, Kate Hersch. “To me it was the perfect amount of guests and of course, so many people to admire, but it wasn’t too loud so one could converse at length with old and new friends.” Conversation was sprinkled with venture capital deals, sports scores, thoughts on Balenciaga’s latest collection and even, where many were going for the holidays (beach or snow?—always a conundrum).

Swingin’ On A Star

Four trumpeters announced the guests’ arrivals. Will Collins, famed Liberace impersonator based in Las Vegas, tickled the ivories in true, flamboyant showbiz style. At Dean’s arrival, Collins led the guests in a rendition of Happy Birthday. The birthday cake, a Red Velvet chocolate concoction with white chocolate icing created by artisan baker Scott Calvert, measured over five feet tall and Dean blew out the candles with a little help from his wife and six-year-old daughter, Madison.

As the evening heated up, another Las Vegas-based entertainer, Brian Evans, accompanied by brass, strings and a rumba beat, took the stage. Known for opening Jay Leno’s act at the Mirage, his smooth voice caused the ladies to swoon and the men to sway. “What better entertainer than one who can recall the Rat Pack days?” offers Andrea, who knew of the singer’s talents and Dean’s affinity for Vegas. Clad in a classic tuxedo, Evans kept everyone sashaying on the dance floor with his versions of Sinatra’s classic standards and kept the entire party humming with glee.

“Having my daughter run and jump into my arms in an elegant red party dress, with her hair pulled back was the highlight of the evening, and set the tone for the rest of the night,” recalls the man of the hour. “Having all of my immediate family there with from my hometown of Texarkana was so memorable. My uncle, aunt and cousins made a special trip all the way from the beautiful Russian River Valley of Sonoma County.” Author Kristin Armstrong, too, was also moved by the surprise element of the evening, “Andrea did not miss a thing. I know Dean felt thoroughly loved.”

Fly Me to the Moon

“Just as I was admiring the understated elegance, the fireworks went off,” says venture capitalist guest Robert Hersch. With hours of cocktails, cuisine and dancing under their belts, the guests were treated to another surprise—a fireworks show that rivaled any seen on the Fourth of July. This crisp, cool evening where one could almost touch the intangible sparks was so symbolic of the evening. “The Bullock Museum was the quintessential venue for us, in that we knew Bob Bullock and love politics,” says hostess Andrea McWilliams. “The grandeur of the museum was the only space that could contain this party and we loved every minute of it.”

Dean McWilliams echoes the sentiments of the significant evening. “Most of all, the party experience reminded me how much I love and cherish my wife,” says Dean. “She selflessly made this party all about me and the family and close friends who attended. The sentimental value represented by the venue can also not be overlooked. It’s a tribute to Texas history and politics, which has had such a strong influence on our professional and personal lives, as well as those of our friends. More importantly, the event was held on Congress Avenue which happens to be the exact street where fifteen years earlier I first saw the love of my life, Andrea, and said to myself, "I'm going to marry that girl someday."