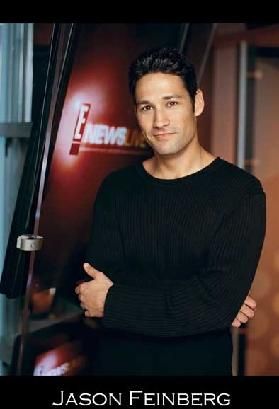 If you’ve surfed with your television remote recently, you’ve most likely seen handsome channel-stopper Jason Feinberg, the newest thing to hit Hollywood. He left Austin for Los Angeles on a leap of faith with a heap of talent, and is now in the driver’s seat with a white-hot career as the entertainment’s industry’s most likeable TV journalist. When we met up for lunch in Manhattan Beach, the day after the Emmy Awards, his Emmy feature happened to be running on TV, so lunch was delayed while we watched the master at work. After that, Jason opened up about his great life in Hollywood.

Lance Avery Morgan: I recently saw you really working it on the red carpet when I attended the Emmy Awards. Is life one big red carpet moment for you now?

Jason Feinberg: When I came here, I cashed in the 401K because I believed I could make it here. It hit me one morning while I was on the air in Austin. I had this weird feeling that this was going to be the Year of Jason. My contract ended and I moved here. It’s been a lesson in patience in getting to this point. And yes, I spend a lot of time on the red carpet.

LAM: What was your first big story score at E!?

JF: It had to be my first story the Monday after the weekend the 8 Mile movie was such a big hit. It was a huge phenomenon to be reporting.

LAM: What was your most embarrassing red carpet moment?

JF: It has to be when I mistakenly introduced Shania Twain to our viewers in an American Music Awards segment as “Shania Feinberg”. Of course, we were on the air live. I also asked her the same question I was asking everyone else that night: ‘Who’s hotter: Shania Twain or Faith Hill’? She said that to be in the same category as Faith Hill was an honor to her. She’s that great to say something like that. It put me on the map at E! They understood I was the guy who could wing it.

LAM: So, your Freudian slip was showing.

JL: Are you kidding? All the time. I like being goofy with the celebs – it puts them at ease and they show their human side more, too. 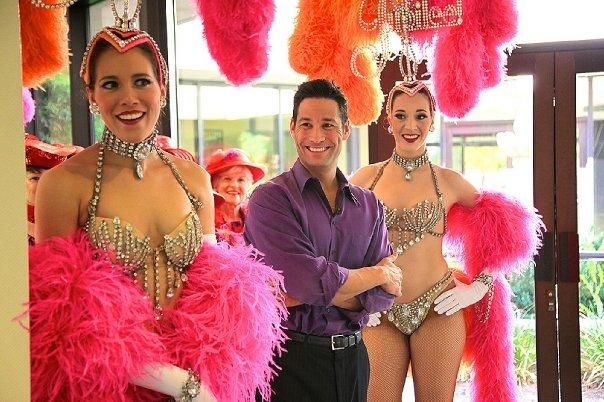 LAM: What was your biggest adjustment transitioning from news to entertainment?

JF: I didn’t know who all the stars were – but I quickly learned. I had to. I have a great crew that is really helpful. Most of the time, anyway. They like to rib me, too.

LAM: You must have a great deal of competition – like Entertainment Tonight, Extra, and Access Hollywood – is that difficult?

JF: They have a bigger entourage; a bigger field crew and research team than we do. At E!, I’m responsible for my own research, which I like. And the fact that I can offer the celebrities a much different perspective than what they are getting with other entertainment journalists - with the same old questions they get asked. Like the time I interviewed Juliett Lewis on the red carpet. I knew she was getting the same canned questions. That’s why I asked her about her favorite breakfast cereal instead. I like it when people can laugh at themselves – and me. We also talked about music and wound up being best friends because we have the same musical tastes.

LAM: Are too many people in Hollywood concerned about their image?

JF: Totally. Every time you see me on TV, the stars are joking with me. It’s based on respect. They’re laughing with me and they know I have a job to do.

LAM: Who has been your toughest interview?

JF: Not really tough, but Keanu Reeves isn’t very animated. Neither is Sam Waterston, who is a great actor. Steve Martin isn’t an easy interview, either. And I’m a big fan of his and let him know. He didn’t think that mattered. We actually aired that one. Because of his behavior, I said in my story that I forgot if I was at the premiere of Bringing Down the House, or The Jerk. He wrote me an apology letter, so we’re on a clean slate now. Most people are really cool.

JF: Nick Nolte, by far. Out of this world. That was for The Incredible Hulk press. He took the interest in me to tell me about his spiritual side.

LAM: What was your goofiest red carpet moment?

JF: It had to be with Samuel L. Jackson at the S.W.A.T premiere – I got him to sing the TV theme song for me.

LAM: Are there any moments that are stressful with what you do?

JF: All the time. I’m very careful to not bruise a celebrity’s ego. That is really important. I have to keep up with every facet of many careers – to not make a slip and mention a movie they weren’t in, as an example.

LAM: What was your biggest adjustment in moving to L.A. from Austin?

JF: I try to not lose the passion that I have for certain things. In Texas, whether it was the lake, UT football, the political arena, they were passions of mine. People tend to more non-chalant about things here. If you look at the Top 10 Nielsen ratings for the country versus the same for L.A., and it is almost completely different. Monday Night Football isn’t even in there.

LAM: What has been your most all time unusual moment at E!?

JF: It had to be when Arnold Schwarzenegger was co-host of E! News Daily when he was promoting Terminator 3. He was very cool, and we had a lot of fun working together on the set.

LAM: What do most people think of when they think of Jason Feinberg?

JF: That I’m gay. Which is fine, although I’m not. I love women. Half of my fan base is gay guys. The other thing people think is that I am a dork in a good-looking man’s body. They’re pretty right on that. I can be a dork.

LAM: So, do you get hit on a lot by female celebrities?

JF: You know, on camera, we’re all on. It’s very flirty. Lots of kisses. I’m a little intimidated by them – they have so much more money than I do, and I make a nice living.

LAM: What’s next for Jason? Are you the next Greg Kinnear?

JF: Funny that Greg in I were in the same fraternity, ATO, at the same college at Arizona. We were there at different times, but it is weird we both have these connections. I’d like to have my own show on E!, too. I think going the Ryan Seacrest hosting route, while still being able to work at