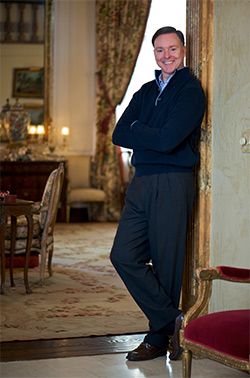 Let’s say you plan to set out on a cross-country journey to find the richest self-made man or woman in 100 American towns. A hefty feat? For most, yes, but not W. Randall Jones, author of the new tome, The Richest Man in Town – The Twelve Commandments. Finding the coveted 100 and learning their theories and discerning their commonalities of success has certainly struck a chord. Rich and not-so-rich alike, everyone is able to learn how to add more richness to their lives.

“This may be the most fascinating journey I have experienced in my entire career”, enthuses Randy Jones from his office in midtown Manhattan. “Interviewing the most successful self-made man or woman in towns all across America proved to me that the American dream is very much alive. It also signaled to me that we are living in the most exciting time in American history because of the way media and technology are racing into confluence.” As founder of American Benefactor and Worthmagazines, the always-youthful Jones knows about media and shares that in his new book, The Richest Man in Town – The Twelve Commandments.

At age 29, he was the youngest publisher of a major magazine, Esquire, when he took it over in the 1980s and has looked upward ever since. “My time in the media swirl also taught me that too often the media views wealth and success only through the lenses of Wall Street or Hollywood, and yet there is this vast country in between where great success and massive wealth is being created. You can get wildly rich in any town in America,” says Jones. “In today’s economy, I see a lot of parallels to 1992 when Worth was born. It was a tough economic period then, too. Our country was at war and many folks felt disdain for the wealthy Wall Street players. In tough economic times though, people are looking for answers and solutions, but they still have to be seduced by the medium; there must also be entertainment value. With Worth I wanted to bring a little sex to money; a little Hollywood to Wall Street.”

Jones, in his varied social and professional circles across the globe, has studied the moneyed for years. “In this book, I see the world people first,” says Jones, “because people learn best through the experiences of other people.” Jones also has a radio show in which he counsels people who have been downsized and advises, “It may seem that things are dire, but now is the best opportunity to reinvent yourself and educate yourself in a new way. Be a continual student and a perpetual petri dish for learning.” 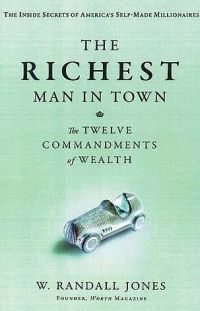 It’s Jones’ contagious entrepreneurial spirit that has propelled him and his book’s subjects to self-made success. When asked how he got the idea to begin writingRMIT almost five years ago, Jones confides, “I was in my hometown of Carrollton, GA. having lunch with my 14 year-old nephew, when he nudged me and said, ‘Look, there’s the richest man in town’ and it hit me like a stone that every town has one. They are usually the biggest employer, most generous philanthropist; they are revered and sometimes even feared.”

The book reads as both a feisty how-to with a collection of engaging non-fiction biographies. “I wanted to go to towns like Belspring, Virginia, with a population of 169, where billionaire R.J. Kirk made his fortune in bio-tech. Then, of course, there’s Red McCombs in San Antonio who is still going strong in his 80s,” Jones shares as examples. “It’s motivating for a younger generation in their 20s and 30s feeling disenfranchised these days to know they didn’t miss the era of success and this book proves it. The American Dream lives.”

According to Jones, there are many common denominators that the subjects of the book possess: they have high octane ambition, they own and control their own businesses, they do not fear failure, they are masterful salespersons, and they build their personal brands by mooring themselves to high morals.

Jones is quick to point out that women are poised for even greater success in the future (there are four in The Richest Man in Town, saying, “Women have traditionally been better at adapting to changing environments and reinventing themselves. Women are starting businesses at twice the rate of men right now – doing their own thing gives them flexibility to manage their lives on their own terms. There are people like Christel DeHaan, the richest woman in Indianapolis, who once took in typing to feed her family, and ten years later was the CEO of her own company, Resort Condominiums International, which she sold in for $825 million in 1996. Judith Paul in Boulder, Colorado created Renaissance Learning, the largest reading software company, because of her personal challenge of having a child who didn’t love to read. She’s a great example of adapting to both change and necessity: she was a stay at home mom, educated to be a teacher, and uniquely changed the way so many kids learn to read.

The Richest Man in Town is for billionaires, millionaires and those who feel they are on track to being that. The common thread for all these success stories is that the subjects loved what they did, put in the time to perfect it, and the money was simply the natural byproduct of their success.