Swinging It with Dennis Quaid

By Hollywood standards, there is no reason why Dennis Quaid should still be a movie star. His film career is venturing toward the 25-year mark—well past the expiration date of most of his peers who are no longer bankable. Yet Quaid is in the middle of a remarkable career renaissance. In 2003 alone, he won the New York Film Critics Award as Best Supporting Actor and receiving Golden Globe and Screen Actors Guild award nominations for his stellar performance in the critically praised [Far from Heaven], costarring Julianne Moore. He’s back in a big way in the role of Sam Houston in what may be the most integral part of The Alamo.

When Quaid arrives to tee up, he’s coming from a grueling 14-hour day on the film’s set. Speaking Cherokee. Quaid is a latecomer to the project; costars Billy Bob Thornton (playing king of the wild frontier, Davy Crockett) and Jason Patric (playing sand-in-the-line-draw-er William Barrett Travis) have already been in Austin filming for months. Directed by fellow Texan John Lee Hancock, the project is budgeted at $75 million and promises to be a faithful retelling of Texas’ notorious battle against Mexico.

“Hancock is fantastic,” says Quaid. “The Rookie was a $30 million film. He did such a great job on that as a directorial debut. Now he’s taken on this, which is such a huge thing. Everybody’s going to be really surprised about The Alamo.” Not since the original The Alamo starring John Wayne was released in the ’60s has a movie about this state history been so widely anticipated. It arrives in theaters nationwide in December, and there’s a strong chance that the film’s premiere will take place in Austin.

The production finished filming early this month, and the laborious editing has already begun in an effort to make the Christmas Day debut. It’s no secret that the project has been plagued with problems—budgetary headaches, director Ron Howard’s on again-off-again participation, the rumors of Russell Crowe and Ethan Hawke starring in it, and the sheer challenge of re-creating hundreds of acres of early 1800s Texas terrain in locations south of Dripping Springs and in Bastrop. Sources close to the film have said that the production was riddled with the usual challenges associated with shooting a medium-budget film on location. Yet Dennis Quaid is in good spirits today. When asked how filming has been going, he responds, “Man, we’re a having a blast.” 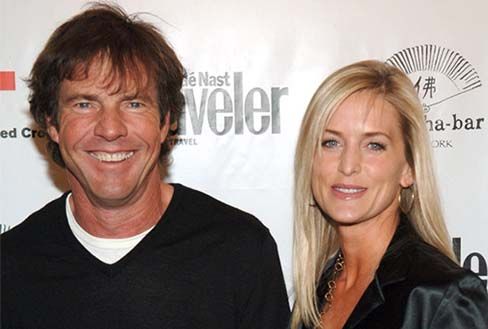 He’s taller than one expects him to be. Standing at 6’1” and in great shape, thanks to a commitment to yoga and weight training, he’s grown mutton chop sideburns to go with his 1836 persona of Sam Houston. When the original The Alamo debuted, Quaid was attending Paul Horn Elementary School in Houston. “I used to play The Alamo—the Battle of San Jacinto—as a kid in Houston, so this makes the movie cool for me. We had Texas history in school before we had American history, and I knew quite a bit about it before the film.” He never could have imagined that more than 40 years later he would be acting as the man integral to the battle and his hometown’s namesake, Sam Houston.

Quaid’s acting career began at the University of Houston in the early ’70s, where he was greatly influenced by the college’s acting professor, Cecil Pickett. Recalls Sidney Berger, who recruited Pickett and who has run the drama department since 1969: “Back when Dennis was in school, he didn’t say ‘I want to be an actor’ or ‘I’m going to Broadway.’ He said ‘I’m going to be a movie star.’ And he sure did become one.” When I ask Quaid why he thinks so many famous people are fromTexas, he says: “You know, I’ve tried to figure that out. We’re raised with big personalities. Here people are larger than life, and many of them become famous.”

Quaid’s star power began its megawatt rise with the surprise hit of 1979, Breaking Away. From there, he captivated the world by playing what can now be considered classic roles: astronaut Gordon Cooper in The Right Stuff, a film noir-style police detective in The Big Easy, and pilot Tuck Pendleton in the sci-fi fantasy Innerspace. After a string of mostly forgettable films in the early and mid-’90s, he bounced back with The Parent Trap, The Rookie, and the hit, Traffic.

Quaid has costarred with some of the most talented leading ladies of the modern era: Jessica Lange (Everybody’s All American), Meryl Streep (Postcards from the Edge), Winona Ryder (Great Balls of Fire), former wife Meg Ryan (D.O.A., Flesh and Bone), Ellen Barkin [The Big Easy], and Cameron Diaz (Any Given Sunday). According to Quaid, the John Travolta role in Urban Cowboy was written specifically for him. “I didn’t get to play it because of timing and other factors, but yeah, that is a role I was supposed to play.”

Shy and reticent around most people, "I was very uncomfortable with all the attention when it first started happening to me,” he said early in his career. “I retreated quite a bit from the world, both physically and emotionally. But then you just accept that you can't control what the rest of the world thinks or does.” Now moviegoers’ desire to see Dennis Quaid on the big screen has led him to one of the biggest comebacks in film history. Todd Haynes, the director of Far From Heaven, has said about Quaid’s critically praised role as a McCarthy-era repressed homosexual husband: “There aren't many men who are man enough to do that.” These days Quaid seems to be able to do anything.

Quaid has been called a difficult actor in some Hollywood circles. “Difficult actor” usually means that he demands more from himself as well as others. Much like Sam Houston reportedly did. Quaid reenacts the role of the war hero who grew up with Native Americans and whose prior exposure to the Cherokee tribe is a component of the film’s story. In researching the role, he says, “I found that Sam Houston was very complex. He was the governor of Tennessee, he left office in scandal, his wife died of mysterious circumstances that nobody really ever found out about, and he lived with the Indians. In his time he was the only white person in the United States to have been made a full member of the Cherokee Nation. He came to Texas, was an alcoholic, and was probably bipolar, which is why he may have drank—to self-medicate. He was a hard man to like, but he had tremendous charm. He was a great leader, but at the time when the Alamo was going on, nobody really trusted him.” 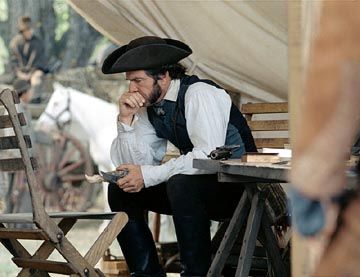 When I ask if there is another role in the film he would have wanted to play, he responds, “When you hear of the Alamo, you think of Davy Crockett. But Billy Bob really [is] Davy Crockett. He’s a hillbilly movie star, and that’s what Davy Crockett was at the time,” referring to the hero’s legendary persona.

Filming The Alamo— and before that D.O.A, Flesh and Bone, and The Rookie—has brought Quaid back to Austin time and time again. According to Beau Holden, his personal assistant of over 15 years, Quaid has lived in the same Westlake area house every time he has filmed in Austin. “I am the one-man entourage for Dennis: chief of staff and also water boy,” says Holden. Originally Richard Gere’s assistant for two years, he and Quaid met when Holden was to assist director Taylor Hackford on Quaid’s 1988 hit, Everybody’s All American. He and Quaid have been together ever since. In the entertainment industry, the same personal assistant for a decade and a half should be given a Lifetime Achievement award. “We’ve been through the good, the bad, and the ugly together,” says Beau. “When the tables turned, and I went through a messy divorce, Dennis was really there for me. He is a great friend.”

Based in Los Angeles and Montana, Quaid enjoys working in Austin: “Texas has a really great film commission—and Austin is really the best place to shoot. There is such diverse land around the city. You go east, and you get the forests. Go west and get all the hills. It’s better than just about anywhere.” Of course, it doesn’t hurt that this is such a great music town.

When he takes a break from filming, he performs with his band, The Sharks—a name picked by his son. “It’s a good thing he wasn’t into dinosaurs at the time, or that’s what we’d be called,” says Quaid. About the music scene here, he says: “I think this is the best music capital in the United States. Music is very eclectic here, and the people are devoted to it. There are longtime fans of specific bands and people are not so much into the popular culture here; it’s more about what’s really good.”

The Sharks’ style is more Americana rock. “When I am working, we play every few weeks. When I am not working in L.A., we try to play every week there. Here, we like to play at Antone’s; we always have a good time. We just played with Los Lobos at Stubbs. We also were at Gruene Hall near New Braunfels, where we shot Flesh and Bone.” Quaid’s greatest musical inspirations are classic artists from years past: “When I was growing up the Beatles were big,” says Dennis. “I also like Elvis and Hank Williams.” Quaid has written songs for three of his films: The Night the Lights Went Out in Georgia (1981), Tough Enough (1983), and The Big Easy (1987).

While he’s in Austin, he enjoys some of the area’s best restaurants. “I like Trulucks, Sullivan’s, Kenichi, and anyplace that serves barbecue. I also like Fran’s Hamburgers—I just had one this morning for breakfast,” he says. And when he’s not working, playing music, or eating, there’s golf.

“Golf can be addictive,” says Quaid. “I took it up about twelve years ago when I gave up cocaine. I traded one addiction for another.” The healthier addiction has paid off. He is actually a very good golfer who has played with the likes of Tiger Woods and admits he plays as often as he can. “One of my best games was with Steve Croft of 60 Minutes, in a Long Island tournament—and my foursome in L.A. includes James Garner and Mac Davis,” says Quaid. Plato had a point when he wrote that a person can learn more about someone with an hour of play than a lifetime of conversation. Quaid agrees: “Golf is a great chance to get to know other people. You can really find out what they are like. I also like getting out there and concentrating on the white ball going into that little hole and forgetting about the world around me.”

Quaid recently decided to use his love of golf to benefit children. Quaid and his celebrity friends will be playing to benefit the Austin Children’s Shelter, Austin Children’s Hospital, and the New Orleans-based International Children’s Hospital (his national charity). “It’s a great organization,” says Quaid. “Ninety cents out of every dollar goes to the cause. When I can, I go down to places in Central America to help them build their buildings. I like working with my hands.”

So what’s next? His Hollywood stock is trading well, not only with his work on The Alamo, but also his upcoming big budget films Day After Tomorrow and The Devil's Throat, to be released next year. “I’d like to direct again some day, but it takes eighteen months out of your life to do that,” says Quaid, referring toEverything Rises, the 1998 TNT made-for-TV movie he directed and starred in. No matter what his next choice of film or directorial roles, count on Quaid’s inevitable return to Austin to film another project sometime in the future.