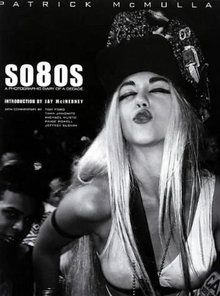 In the 80s, the resurgence of pop culture after the hippie dippy 1970s, charged in with vibrant optimism not seen since post-World War II. Sassier than the 1950s’ Lost Generation, sexier than the 1960s’ Jet Age, and wilder than the 1970’s Me Decade, America was ready to cut loose and come out for fun in the 80s. Patrick McMullan, then the new-kid-on-the-block photographer, captured the hearts, minds and souls of so many icons past and present. Here, in an exclusive to us, we jump into a time machine to bring you the very best of the decade’s scenes in New York. Buckle up.

By the mid-80s, Esquire magazine had already coined the 10-year span as The Re-Decade, claiming that the decade was capturing the best (and worst) of previous eras—a hangover from the 70s with its new found self-entitlement, preppie clothing that evoked the gentler 50s, and a wildness that recalled the Roaring 20s. The decade had it all, ranging from promise to promiscuity. From the beginning of the go-go Reagan era in 1981 to the stock market plunge and the death of Andy Warhol in 1987, New York threw itself one of the longest parties in history, which Patrick McMullan, armed with a genial smile and a simple camera, began documenting in 1983 with a column in Detailsmagazine. McMullan’s unrelenting documentation of the famous figures who made New York City nightlife emblematic in the age of excess is captured in So 80s: A Photographic Diary Of A Decade (powerHouse Books). His black & white tome captures the dichotomy of the era and is a journey of the people you adored, styles you hated, and parties that never seemed to end. Yet, McMullan is modest about his success. “The clubs were a lot of fun and it was great to be wanted,” McMullan shares. “Because I took photos for magazines, people at the clubs were happy to have me there and treated me well.”

There were other paparazzi then, sure, yet in the 80s the essence of social photographers was McMullan, hurdling from Studio 54 to the Palladium, from Area to Danceteria to Limelight each night to catch the celebrities, up-and-comers, visiting royals, drag queens, and drug dealers. McMullan captured it all, and his camera was nondiscriminatory; as long as the people were interesting, he’d photograph them and make them stars. “I always take pictures of regular people who intrigue me,” he offers. “At parties I am a great introducer and an asset for getting people together who are intelligent and funny. I really enjoy people who liked to have their photos taken—people who are in a good mood, well dressed, and happy. They can be designers, models, socialites, all party people, of course. In the 80s we had our own group of club celebs, and we also had real movie stars.”

Educated at New York University, McMullan, majored in business and, as he jokes, "minored in Studio 54." He and I had the opportunity to work together with menswear fashion designer Jhane Barnes when Brilliant sponsored her Real Texas model and advertising contest across the state in 2005, which McMullan documented. It is easy for anyone who comes into McMullan’s orbit to understand why he is considered one of the world's most celebrated party, fashion, and society photographers. Seen in action, his natural sense of ease with both the famous and unknowns is equally captivating. He knows almost everyone there is to know in so many social universes, yet is just as charming to those acquaintances he has not yet made. People clamor to be shot by him and he always delivers more than expected. He invites people to open up for his camera by being themselves; he even entices his subjects to kiss, canoodle, and just have a great time. And, all the while, McMullan himself is having the time of his life, too.

One of the rising stars McMullan met early on, who graces this month’s cover, was Madonna. “I was at this party for Amadeus in 1984 and a publicist named Reid Rosenfelt said to me, ‘You should come meet this girl Madonna,’” McMullan recounts. “I said, ‘Sure, I'm very happy to meet her,’ but I didn't know who she was. When I met her and took a few pictures of her, she couldn't have been sweeter. It was just a very simple, unguarded moment.” McMullan would go on to shoot just about everyone prominent in the 80s—from the Brat Pack that included Rob Lowe, Demi Moore, and Andrew McCarthy, to icons Joan Collins and Linda Evans of “Dynasty” television fame, to artists such as Keith Herring and Jean-Michel Basquiat, and hundreds of others just as pivotal to the 1980’s pop cultural lore.

When asked about his favorite 80s staples, McMullan has his own list of supporting characters. “Dianne Brill was the New York club queen, and Lisa Edelstein, who was ‘Lisa E’ then and is now Dr. Cutty on the TV show “House,” was terrific,” he recalls. “I also enjoyed Perri Lister, the choreographer who was Mrs. Billy Idol and Sally Randall, the door goddess and columnist, as well as Anita Sarko who was a super DJ. Other big talents included Betsy Johnson, Liza Minnelli, Bianca Jaqger, Carolina Herrera, and of course, Madonna. There were so many others and they were all very exciting to be around.”

Just like our cover girl Madonna’s anthem of the day, “Lucky Star,” the Manhattan scene hipsters were indeed lucky stars. In a decade that was just learning to embrace fame for fame’s sake, McMullan’s photographs prove that it was the people defined the decade. They represented it as clearly as did the turbulent events such as the Berlin Wall tumbling down, the AIDS crisis, the bear (then bull, then bear) stock market, the real estate rollercoaster, as well as the oil industry which made, then threatened, to break Texas. Of course, what captured the time period in the Lone Star state, and also parodied it most evocatively, was the hit television series, “Dallas.” The show grasped the character of this state, while lampooning and reflecting stereotypes to this day. We saw ourselves, laughed at ourselves and also stated, tongue firmly planted in cheek, those scandals could never happen here. But, they did before then and continue to happen to this day. It’s part of the human condition—a human condition that Patrick McMullan witnessed through his lens during the decade, too—but perhaps just a little shinier and glossier.

With all the decade’s success in the 80s, why was the era’s party scene infused with such devil-may-care vibrancy? Likely, it was because in the 1980s, people were still acting out from a turbulent 1960s and rights-seeking 1970s, so there was a welcome relief to be found in the nightclub scene in the futuristic-feeling 80s. Today, the club scene still exists, sanitized to where hipster soirées are really benefits and product introductions, not parties for the sake of a Bacchanalian retreat. As Neal Hamil, then a club-goer and most recently the North American Director of Elite Model Management, states, “The lights, energy, music and the atmosphere.—it was such a great time. The doormen knew me and had that rope up before I even got to the door. I never paid to enter and rarely did I pay for a drink.”

McMullan agrees with the headiness of the decade. “I'd buy film before I'd buy food because I always needed film,” he quips. “I loved all the birthday parties because that meant there'd at least be some cake to eat and birthdays always bring out the cameras, don't they?” Of his journey into the spotlight, he goes on to say that it started with Andy Warhol. “It seemed that every road led to Andy. He was omnipresent. I thought—and still think—that Andy was a magical person. He was inspiring and he was many things to many people. Everyone felt they had a special thing with him.”

It was McMullan who helped perpetuate the Warholian 15 minutes of fame game, and it is apparent that in the years since he created his 80s images that Americahas become more obsessed with the celebs, nightlife, fashion faux pas, and mating habits of bold-face names. When asked who now would have made great 80’s celebs, McMullan emphatically shares, “Paris Hilton, Lindsay Lohan, Britney Spears, and (socialite) Tinsley Mortimer.” There were also some 80s stars he expected to last beyond the decade. “Liza Minnelli is still big, but she was such a huge star then,” he says. “Cyndi Lauper also was larger than life; I thought she would go into movies. There were so many big musicians such as Adam Ant, and so many other people who just moved on and didn’t care about super stardom.”

Patrick McMullan, his talents and his images have withstood the test of time. Nowadays, he still avidly chronicles the society and celebrity scene from coast to coast like no one else can, and his future is brighter than the flash of his camera bulb. “I’m working on my archive of pictures and to make my website of photographs, patrickmcmullan.com—a great place to see and be seen,” he reveals. “I want to do more photo books and maybe more television, too. I also look forward to being a grandfather some day, but my son Liam is only 20.

The 80s can never be replicated, and perhaps they shouldn’t, but it was a wild ride to be cherished. “In the 80s journalists would look the other way more often,”McMullan sums up the decade best. “ Parties used to be every night and the guests just showed up. Now, celebrities are more aware of their images and are expected to be very professional. Everyone is much more aware of drug and alcohol abuse and it just isn’t cool to be a drug addict anymore.”