There’s more to life than pretty pictures. It’s the story behind the pictures that’s intriguing. Supermodel Kate Moss is just one of the perfect creatures upon whom Mary McCartney has focused her lens. At the Goss Gallery in Dallas, we caught up with the McCartney in this exclusive interview while she shares and her thoughts on her famous family, La Moss, and the bonds she creates with her subjects.

She rarely grants interviews, so Mary McCartney, dressed in a rock-themed T-shirt, chic jeans and heels, and her hair in loose locks pushed off her shoulders, is almost an apparition. But not because the world doesn’t know of her vast talents. Her pedigree as the daughter of Beatles pop icon, Paul McCartney, is widely known. As is the fact that her famous sister, Stella McCartney, has designed her way into the hearts of actresses, socialites and the garden variety fashionistas across the globe. So, now, McCartney is ready to talk about her career, her own personal style and how the camera never lies.

Sometimes an acutely trained eye can sometimes be a lonely eye. Unless that trained eye belongs to Mary McCartney, whose photographic talents have translated into some of the most stunning fashion and cultural images of our time. She’s recently brought her photographic work, the aptly titled Playing Dress Up, to Kenny Goss’ gallery and it’s caused quite a stir. The sold-out show this summer, McCartney’s first in the U.S., included images from her far-reaching work in fashion, her collaboration with her designer sister, and her personal projects such as the ballet-themed Off Pointe series of photographs. And, of course, there are her especially enigmatic images of supermodel Kate Moss.

“I feel like I become somebody else when I do the pictures. I don't like doing pictures as myself. I like to be made into somebody different,” says Kate Moss, who may just be one of the most photographed faces of the late twentieth century to date. When McCartney first began taking photographs, she knew she had to harness the power of what happens with someone like Moss in front of the lens. “When I first started taking fashion photographs I just presumed models were just that…models. I thought, ‘You’re beautiful and you have your picture taken.’ The more I’ve worked with people, I realize what a really good model like Kate is,” attests McCartney. “Someone might be beautiful but they’re not always going to have a huge career like Kate. Not only is she beautiful, she can be sexy. She can be sweet. And, she can be impish.” McCartney has assuredly captured Moss at perhaps her most evocative. “You know, she’s really amazing. And she moves really well. You want to keep taking pictures of her because she’s so professional.” She continues by saying, “I know it sounds weird, but Kate can remember what position she was in. When you explain things, she can just move slightly differently and then it just makes the picture so much better.” 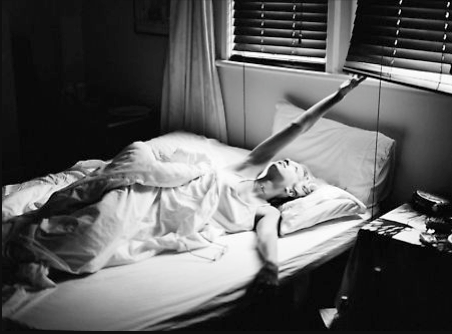 McCartney’s love of making a picture better began early because of her family. When asked whether she was a prodigy, she empathically denies it by saying, “I was always interested in photography… like looking at photographs. When I left school I went to do picture research, so I looked at other people’s pictures. Then I started working closely with my mum, who was a photographer. And so I went into her archive and looking through her contact sheets,” shares McCartney. Some contact sheets. Linda McCartney, her American-born mother, photographed The Doors, Rolling Stones, Aretha Franklin, The Who, and hundreds more rock luminaries. McCartney recalls, “She made a career in rock and roll music and then when she got married and had kids she didn’t do commercial photography so much. But she always had a camera with her. So, now, I usually always have a camera with me.” Photography, McCartney explains, is very personal to her. “Rather than writing in a diary, I liked to take pictures wherever I go so I can look through them and remember where I’ve been and what I’ve been doing.”

Attention to detail works in McCartney’s favor. “For a while I thought that everyone could take pictures and everyone wanted to be a photographer, so I didn’t do it for a while. Then a friend of mine told me, ‘I can’t believe you say that.’ So, I was looking through her holiday snapshots, and I would think, ‘Oh my God, you’ve chopped off that person’s head.’ And there would be someone’s tiny head in the left corner. And then I thought actually maybe not everyone can take a picture after all.” From there, her career began its ascension by taking photos of celebrities like Ralph Fiennes and Jude Law. “I was asked to take the first pictures of Tony and Cheri Blair’s fourth child, Leo. And then the same friend who referred me to that said ‘Bill Clinton is having lunch with a couple of others. Go on and take a couple rolls of film.’” So I started out taking portraits and from that it developed into fashion. Harper’s Bazaar in London asked me to do a portrait study, but it was also a fashion story because it was styled. And from that I kind of crossed over. I really love it.” And many careers are often made by brushes with glamorous destiny. 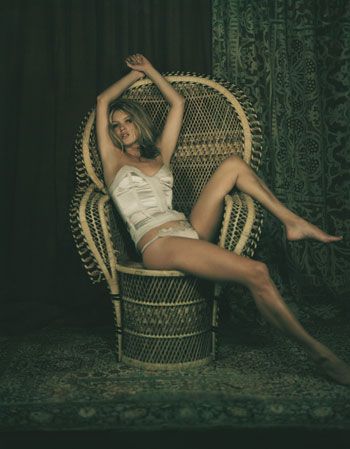 When asked about the mechanics of her profession – the age old color of black and white versus color, McCartney sways both ways. “I generally will pick color or black and white depending on what the project is,” she says. “With my more personal work, I liked using color on the Kate images. I do color because I think it lends itself more to fashion. But then when I’m doing personal stuff like the Playing Dress Up, I have my 35mm camera with black and white film. Off Pointe is black and white just because I made that decision at the beginning. It kind of makes it a bit more timeless and quite classic for me. And I love the tones and texture of black and white.” "I love her work. All of her pieces offer an incredible insight into her life and depict such a personal relationship between her and her subjects which is extraordinary and incredibly sweet, like her,” says Kenny Goss, founder of Goss Gallery who, with his partner, George Michael, considers McCartney to be a close friend.

Playing Dress Up is a series of photographic work where McCartney explored her voyeuristic side by going both backstage and at the runway of her sister’s fashion collections. And even more behind the scenes. “I love bedrooms. I love people’s homes. You know, most people do. Looking through people’s trinkets. It’s sort of like you’re a bit embarrassed about going in, but then in a way you kind of can hide behind your camera a little bit,” she reveals. “I can be there, but then I don’t necessarily have to engage that much. I can pretend I’m not here, but I’m here watching you.” There’s a particular image that McCartney took that really captures the dichotomy of the fashion industry. She says “I don’t even know if I really intended it, yet when I look at it now I think it’s perfection. You see a kind of thoroughbred model and then the people kind of talking behind her. You think, ‘what are they talking about her?’ So, in a way I love that moment because to me it’s showing the industry in a way the people that write about it… You see the shimmery catwalk and then, those who observe it. It kind of tells quite the story of the fashion industry.

It really is the personalities who create the story in front of the camera who are important to Mary McCartney. “I find people very interesting. So, I like to be in situations like Off Pointe. I developed a relationship with them and they trusted me. I was allowed access to their bathrooms, their bedrooms, their dressing rooms. So, that’s quite an honor,” she recounts. “But that’s very much like me, just observing what’s going on…watching and snapping.” The Offpointe photo series was a true coup for McCartney to land: a backstage pass with London’s Royal Ballet where Mary followed the group for three months and captured the contrast of exhausting realities and fantasy performances that ballet creates. “With the ballet, you’re watching a ballet performance and you think, ‘I wonder what that ballerina is like in real life or I wonder what mood they’re in today.” Or ‘What happened to them this morning and what they did they have for breakfast?’” McCartney ponders.

“I find all that is just as intriguing as the performance. I love to be backstage and am lucky that the ballet allowed me there, obviously quite a privilege. I just find it quite intriguing ‘cause you see the dancers, some of them with their kids, or some of them reading books, or some of them all chatting and laughing. I find it quite fascinating.” she shares. “I love the total perfection versus the critics. They’re all pressurizing ballet backstage – with the music and everything like that, sort of everything that goes on so intensely backstage. And I wanted to do was figure something out to make the end product beautiful and perfect.” When asked if she became personally attached to her subjects, she comments, ‘’There’s one called Hug Backstage in which one of the dancers came offstage and she went over to her friend to a dancer and gave him a really big hug. It’s quite emotional because a friend of theirs had died that day.”