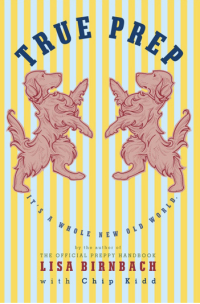 I recently caught up with style icon, author and humorist Lisa Birnbach, who is sharing her Preppified wisdom with the world again.

Let’s face it: Lisa Birnbach is a goddess-like icon in the World of pop culture.She is charmed when I tell her I felt it was like the shot heard ‘round the world when The Official Preppy Handbook appeared in 1980. It’s so true. The book’s debut was like the NewNew Testament to those hungry for great style after the leftover hippy-dippy 1970s. And, it was long overdue. She made TOPH grow up and didn’t allow it to be stuck in a time warp.

The Official Preppy Handbook had revelations recalibrated from the 1950s and early '60s Mid-Century cool, much like the TV series Mad Men has done over the recent years… and helped to capture a forgotten style that ended before its prime. Heck, it was a guidebook for a country that needed guidance after the fuel shortage, Vietnam ending and lame Presidents. It became a beacon of things stylish after the decade of yellow shag carpeting, too much tie-dying and bad polyester endeavors.

Recently, Birnbach, along with fellow Prepster designer and co-author Chip Kidd, has given new life to old ways and updated the venerably classic book, True Prep, and has made it new and fresh again. It’s almost like finding that cashmere sweater, all laundered and smelling wonderfully clean, after you thought you left it on a plane, never to be seen again.

Birnbach and Kidd’s punch line can easily be, “Wake up, Biffy. We’re baaaack,” as a follow up to international best-selling phenomenon over thirty years ago.

Actually True Prep is a right-now take look at the old school of substance; things like all natural-fiber clothing, hardy cocktails like a Manhattan or Gin & Tonic, and the like. What’s not to love about that? The book is filled with Birnbach-isms…. including the Prep attitude towards money (ambivalent), schools (good investment), wardrobe (now your clothes fit), work (some careers will never be prep), decorating (ask mummy), scandal (including rehab and prison), and food and drink (with some classic recipes for both). She also looks at weekends (and what to do to get asked back), entertaining, sports (including sailing and shopping), weddings, etiquette, the Internet and electronic gadgetry, political correctness, reality TV, and . . . polar fleece. And last but not least: a do-it-yourself eulogy.”

Now that’s some good quality information in this book. When we made contact, I couldn’t help but ask what Birnbach’s favorite things were, included in the book or not. Let’s take a look at Birnbach’s picks for The New True Prep Preppie, along with herself…

Lisa Birnbach: In the 30 years since I published the first book, I have found a new favorite summer drink – a vodka gimlet with fresh lime juice. However, I have become a fan of tequila. In Texas, they make that Mexican Martini that’s quite good.

LB: That has to be Charleston, SC. To me Charleston is a kind of gem – like Venice – it’s cute and adorable – yet is scaled so manageably. Then there’s Bermuda, Nantucket, and Capri before it gets crowded in summer.

LB: For me, it’s reading wedding pages of The New York Times. I’ve been addicted to that for years.

LAM: Clothes are a part of the Preppie persona. What’s the best women’s Preppie outfit for day, in your opinion?

LB: For years when I was in my 30s it was long sleeve T-shirts by Anges B. I had children throwing up on me (my own), so it was my uniform. I think women look great in man-tailored shirts, unbuttoned a tiny bit… sort of boyish. I love stripes, bright colors and oversized gingham, too.

The best basic look for day is a button down shirt, straight jeans, and perhaps a cardigan when it is cool. It’s forgiving on any size. I am going to dress this way the rest of my life. It may not be the sexiest, but it’s the chicest.

LAM: I agree. Not everyone looks great in super trendy clothes. What’s your favorite outfit for women at night… the little black dress?

LB: Oh, yes. I have many sheaths and many are black. One of the reasons I like it is that you can add a wrap, jacket or cardigan and it doesn’t require you to take of care of your arms.

LB: Croquet. It’s not my sport, but is so Preppie-specific because of its presentation, wardrobe and community. I mean, really, you can’t just walk over and pick up a croquet game. Men who are crazy for croquet are confident in their manhood. They love it.

Preppies love tennis, too. Sailing is a great sport – it encompasses the fact that Preppies love water and boat shoes, yet there’s the chance of windburn and expensive equipment that breaks down.

LB: Preppies love their art museums as well as conservation societies, which are both about preserving that which is old. It’s also a way to give without being reminded there are people suffering. Giving to the mentally disabled is a big one – look at the Kennedy’s with creating the Special Olympics, as an example.

LAM: I’m glad you mentioned the Kennedy’s. Who do you think was the most Preppie president?

LB: It was JFK for sure. Actually, I think that most presidents are preppies because of their family and schooling, Also, because they are President, they usually have a big bank account and a big personality. And, really, it’s easier when you are a legacy – just look at FDR, John Quincy Adams, and the Bush’s.

In modern times, the White House Kennedy’s were the most vibrant, attractive and vivacious couple. And, elegant. The Kennedys were attractive, confident, and sporty, too. They didn’t invent touch football on Thanksgiving, but they own it. And, yes, we now know things that show their imperfections.

What Jackie wore is as relevant today as when she was alive and First Lady. The Jack Rogers sandals, Capri length pants, oversized sunglasses. I’ve seen very early pictures of her and it didn’t seem like she was striving as a young woman. In fact, she looked like she was quite comfortable in her own skin.

LB: I was at a cocktail party in New York recently… in a penthouse. The host was wearing Bermuda shorts, topsiders, and a LaCoste shirt. He was very comfortable with his guests going to a black tie party later and dropping by first.

When I speak with Birnbach about the book and how it came to fruition and has been received, she’s very candid.

LAM: Tell me about the fan reaction to the new book.

LB: I relieved it was well received, but I didn’t want to do the sequel. When the book was coming out, the critics it, but it was some of the readers who anonymously posted things here and there; like how dare I talk about Barak Obama as a Preppie? How dare I open it up to people of various ethnic and racial groups - they were so ugly. The Internet is un-Preppie because it is a license to be mean anonymously. I find that disappointing.

Look, I’m Jewish – I’ve never hidden that. I’m not ashamed of it now because I was Jewish in 1980 also. It’s important to be who you are. Plus, somebody who is an 18th generation WASP would never able to appreciate it from the outside like I have. I mean Jewish people are like Preppie people in New Canaan, CT. There is no adjustment – no self hating. It is what it is.

LAM: Is that a reason that the first book happened?

LB: I’ve always had a sense of humor because I had a really funny father. A sense of humor was highly valued in my family of origin. To me funny is one of the most flattering things to be called - besides being thin.

Plus, I knew the Preppie world from the inside and the outside. It has helped insiders feel more inside and has allowed people to understand more. I am a social observer and majored in Semiotics [every cultural phenomenon can be studied as communication], which is about what things represent. I didn’t try to change anyone’s life, or make it over with The Official Preppie Handbook. I didn’t want to be famous.

LAM: It did make you famous though, and it’s a much more enlightened pop cultural word because of it. What else are you up to?

LB: Thank you and thank you for asking. I have traveled the world for Tommy Hilfiger. Tommy approached me about doing something together. His brand had gone astray with Hip Hop crowd and he wanted to create PrepWorld. You know, his business is so much bigger in Western Europe and Asia than anywhere. He sent me to Europe to see what are Preppies are like there. Trust me, they take this as seriously as anyone in Charleston. He’s really big in Japan, so Tommy is building several beach cottages – 800 square feet with sod, sprinklers… it’s the perfect American beach house. So, I’ve written a mini guidebook to how to be Paris, London, Hamburg. It can be found at www.tommyhilfiger.com.

LAM: It sounds like a blast. Do you ever get to Texas, like when you are in for the luncheon next week?

LB: I love Austin. I’ve vacationed there – unwittingly I’m a New Yorker , so when it comes to The BBQ Question of who has the best, I can’t answer it. But, I am an American, so I love BBQ.

LAM: Did you experience Austin with The Original Preppie Handbook?

LAM: I knew about it in the 80s – the music, food, culture. I spent time in Austin this Fall with Chip Kidd, art director of book. We were there for the Texas Book Festival. It was so amazing; walking home late on a Saturday night on Sixth Street. It was like time had stopped. People were meandering, almost like it was a mellow music festival with the locals enjoying the city.

LAM: Any last thoughts on your new book and its original book so we can encourage people to read it?

LB: Thinking back, for our moment in time, it was big. What I didn’t know in the intervening 30 years was that it was still big. People are so proprietary about what Preppie means to them. Plus, I want to be happy and make the world a happier place.