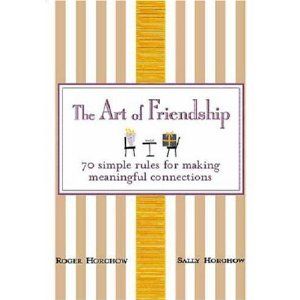 In the new book, The Art of Friendship, Roger Horchow and his daughter Sally Horchow have answered the age-old questions; of how to be a great friend, how to make better friends and how those friends can enhance your life. In this exclusive interview with us, Roger reveals the secrets to his success that far exceeds the theory that we’re all separated by six degrees. With him and his daughter, it’s more like one degree. Now, that’s connecting the dots.

On a brisk winter afternoon, Roger Horchow is surrounded by his prized possessions and museum-quality art collection in his Dallas residence. It’s the very good life he leads in a comfortable East Coast-style home of a life fully lived. His mementos and a plethora of personal memorabilia already slated to be donated to Southern Methodist University at a later date dot the walls and line any available shelf. Several dozens of scrapbooks and photo albums contain everything from White House invitations to photos of everyone notable from his glamour-filled life as an executive with Neiman Marcus and Foley’s and his own namesake catalog, The Horchow Collection, of one-of-a kind objects inspired by global travels with his wife, Carolyn. He’s even a Tony Award-winning Broadway producer (Kiss Me Kate and Crazy for You). In short, he is a Texas legend and Horchow and his family might just be the most well-loved family in the state. 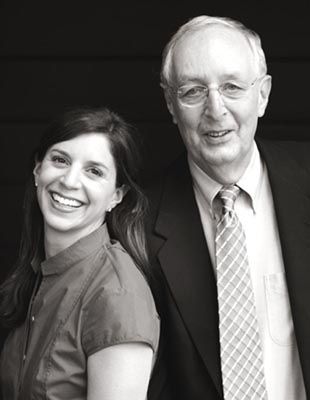 That’s why the idea of writing a book with his daughter Sally came naturally to Horchow. She adds a modern twist, as he says, in providing 70 simple rules for making meaningful friendships. Whether the goal is to form a new relationship, solidify a developing alliance, or refresh a long-time friendship, this book provides all the help one needs to make significant connections with others. The Horchow father-daughter team weave both their experiences on how they have successfully connected with the best and brightest across the world…and Roger shares some of his wealth of advice here today.

Lance Avery Morgan: What motivated you to write {The Art of Friendship}?

Roger Horchow: Malcolm Gladwell, who wrote The Tipping Point is a good friend of Sally’s. Gladwell talked about people who are connectors and people who are mavens and Sally said, ‘You really should meet my dad because he’s such a connector.’ So Malcolm came to the apartment we have in New York for the article about that he was doing for the New Yorker about it. He gave me a quiz that was two or three pages…like out of phone book… and I had to check off everybody I knew from a list of names. For example, if you knew four Youngs you could make four checks. When it was all over, he said I was second to recognizing or knowing the most people. After the article, people began asking me why I didn’t write a book about all my friends and connections. So I started to write the book and I realized it was just from an old person’s point of view - mine - and I realized it needed a younger perspective. I was looking at one of Sally’s articles in the New York Times and found that she wrote exactly how I’d like to write and that’s how the book got started.

LAM: So the apple didn’t fall far from the tree when it came to connecting. Maybe that’s why the book is so successful? RH: Sally is a real connector, too. She recently had a friendship dinner at the Four Season in Los Angeles where she invited 10 celebrities to bring one friend. She had people like Owen Wilson whom she knew from Texas and he brought his director. She had a woman named Jennifer Westfeld, a classmate of hers who wrote {Kissing Jessica Stein}. The dinner was just featured in {People} magazine. It seems like people are buying the books by the stack. It’s great because it’s not controversial. Everybody likes to have friends.

LAM: What was it like working with your daughter, Sally, on this joint project? RH: We just talked for days and days, weeks and weeks. We each learned things about each other that we otherwise wouldn’t have known. It was fun putting down on paper the things that have happened in my life that relate to friendships. Most chapters have a rule and then a story on the side. And then Sally will write a chapter about something that occurred to her. So that was the most fun, sort of bringing it all together.

LAM: Do you think that in today’s world, maintaining friendships has become more difficult? RH: We talk about that in the book; it is called the ‘ebb and flow of friendships.’ A friendship may come back, but unless you have something to reinforce it and you don’t have any new shared experiences, it’s all over. Sally calls it ‘spring cleaning.’ You especially have to do that in L.A.

LAM: That is one of the tough things about L.A. that I recall while living there – it’s a transitory town with people coming and going - and it can be tough to maintain strong friendships. With that in mind, do you have a favorite rule from your book you like to follow? RH: I do. It’s called ‘Don’t Keep Score.’ It’s a tough one because it’s hard not to do, but pretty soon you just have to. For example, you invite a new couple over and you like them. You think, let’s have them back. Then a month passes and you have them back and they love it and you had a great time and you never hear from them again. So then finally you have the choice of ‘spring cleaning’ them or gritting your teeth and thinking they’re never going to call. However, Sally pointed out that she lives in a fairly big house and she loves to entertain. Her friends have little babies and small apartments, so they can’t entertain the way that she does. So they reciprocate in a different way. They’ll call to go to a movie or a ball game. People find different ways to reciprocate.

LAM: Do you think its tougher developing friendships these days based on your experiences? RH: Well, these days there are fewer friendships because people are moving through life so fast. Men have much more of a problem with it than women. Men are afraid they won’t be macho enough if they devote too much time to maintaining friendships. Then there is the whole question of old people saying ‘I don’t need any new friends because I have enough.’ But I remember Stanley Marcus used to say, ‘When you get to be my age you don’t have any friends because they are all dead, so you have to have young friends.’ I have lunch everyday with someone much younger than myself. I have to keep up with the younger crowd, you know. The book points out that you are never too old to make new friends.

LAM: You list “Top Five Conversations” in The Art of Friendship. RH: They’re kind of like pick-up lines, for example you see someone that you would like to talk to at an art gallery and you ask, “What do you think about that piece?” It gives them the opportunity to reciprocate and give their opinion. Sally says that, “If you are ever at a party where you don’t know anyone, no matter how social you are, you will have to make an effort to start socializing.’

LAM: Your book also discusses your encounter with prominent author Scott Berg, which has evolved into a lifelong friendship. Were events like these a factor in your decision to write this book? RH: No, it was just a story about ‘keeping your antenna up.’ A lot of it has to do with connections, like meeting Richard Rogers when I was at Yale. In New Haven, Connecticut they used to try out plays. So when I was at Yale in the 1940s you could go for two dollars and sit in the balcony. It happened that in 1949 my junior prom date’s boyfriend was an understudy of Enzio Pinza, the star of the show, South Pacific, and we got into see some of the rehearsals. Right in front of us sat Richard Rogers and Mary Martin.

Years passed, and in 1962 I was the buyer at Neiman Marcus and Dorothy Rogers, Richard’s wife, wrote a book, My Favorite Things about entertaining. As the buyer, I had to introduce her and sell the book so the Marcus’s invited Carolyn and me to dinner. Richard Rogers was there and he said ‘this wasn’t the first time he wasn’t a star… his wife was.’ I recalled for him that I had met him in 1949. They had a piano and I played a couple of Richard’s songs that he had forgotten he wrote.

LAM: Did you and your wife continue that friendship with the Rogers? RH: We did. They said ‘if you come to New York, we’d love to see you.’ A month or two later we were going to New York and I sent them a note saying that Carolyn and I were coming there and what a great time we had meeting them at the Marcus’ and that we would love to stop by and say hello. Dorothy Rogers wrote back immediately and invited us for drinks and that began the friendship.

LAM: That friendship had to have come in handy when you produced Broadway plays. I understand you’re producing a new musical? RH: The new play is called Curtains by Candor and Ebb and my co-producer is Roger Berlin. It is the last play they wrote before Fred Ebb died. They originally became famous doing Cabaret. This one stars David Hyde Pierce. The play is a brand new musical comedy and it’s a murder-mystery. It’s very funny and contains two love stories, a couple of murders and everything but the kitchen sink.

LAM: I’m sure it will be another Horchow home run. You’ve done so many amazing things in your life. Is there anything you wished you would have focused more on or done differently? RH: I’ve been lucky that everything I’ve done has worked out successfully. Of course I would have liked to have done everything better, but it’s hard to say what I would have done differently. So far I don’t have any regrets.