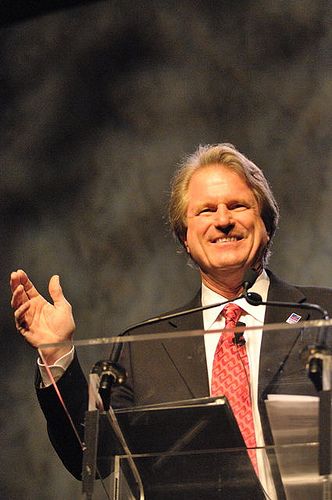 It should come as absolutely no surprise to anyone who knows Roy Spence that he wears a jewelry symbol of The Golden Rule—from each major religion—on a chain around his neck. About a dozen, in fact. Close to his heart. In a world where we’ve seen so many business leaders who lack that kind of spirituality, citing the Wall Street greed that has challenged our economy, Spence rises above with his own spiritual approach to life.

“Every religion of the world has a version of The Golden Rule,” Spence shares. “So, a purpose-based leader practices the golden rule. Treat people as you would like to be treated. We ought to have golden rule summits around the world,” This sincere sensibility is the reason why his new book, It’s Not What You Sell, It’s What You Stand For (written with Haley Rushing), is sure to catch the attention of the business world. And not a moment too soon.

I recently caught up with Spence in his office at GSD&M advertising, a monument to modern advertising success. When walking into these headquarters, Idea City, you are grounded with the words of the agency’s core values that are emblazoned into the floor of the foyer. A visitor is actually inclined to step around them as not to infringe upon them. This company that Spence founded with fellow dynamos Judy Trabulsi, Steve Gurasich, and Tim McClure embodies the success they have been able to create for their clients, with a sense of true purpose.

Southwest Airlines: Democratize the skies and give people the freedom to fly. Wal-Mart: Save people money so they can live better. BMW: Enable people to experience the joy of driving. American Legacy Foundation: To build a world where tobacco is rejected and anyone can quit. It is a laundry list of major brands that have entered popular vernacular, not only because of their purpose-driven businesses, but also with how GSD&M has presented those purposes to the world.

“It’s like sharing a message,” Spence says. “I have been struck for all my life basically because I was blessed with great parents, but of this, this war that individuals go through…I want to live a life of purpose.” And he walks the walk and talks the talk. In fact, as a young boy growing up in Brownwood, he walked his sister to school every day—pushing her wheelchair because she was stricken with Spineabiffida. He goes on to say, “I felt disabled because of it, because I was so attached to her. But it helped me learn great empathy for the world around me.” 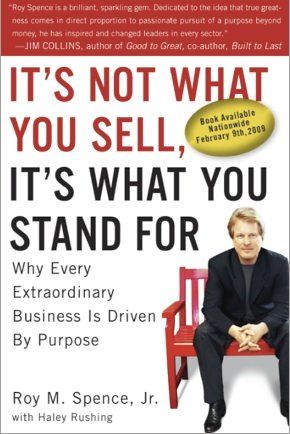 Spence extends that empathic approach to his clients and their leaders, who are often his close, personal friends. He genuinely wants to help them solve their problems of branding. Spence is drawn to power and power, in turn, is attracted to him. He makes things happen. He gets up on Saturday morning and has a cup of coffee with Bill Clinton over a phone call. On Sunday morning, it’s with Hillary Clinton. Spence knew the power duo knew way before most of the world knew them back in the early 70s. No matter how good or bad the times were that the Clintons experienced, Spence stood right beside them. It’s no wonder that Jim Collins, who wrote Built to Last, says that Spence is “dedicated to the idea that greatness comes in direct proportion to passionate pursuit of purpose.”

If You Could Just Bottle It…

If you could just bottle the phenomenon that is Roy Spence. That’s what so many people have thought over the years about the GSD&M advertising agency co-founder. He is a force to be reckoned with, as I well knew before he greets me with a big bear hug. In fact, Roy Spence actually has been bottled—with his eponymous Royito’s Hot Sauce. Growing up, he was known as Little Roy, which translates to Royito in Spanish.

Yet, the advertising agency founder is doing more than just bottling his favorite condiment. He’s about changing the world for the better with his own purpose that already has affected millions with his creativity and co-leadership of the agency. To Spence, business is life, life is fun, fun is work, etc. You see the trend of Spence’s big picture of the world. And the world is in sharp focus in his new book, It’s Not What You Sell, It’s What You Stand For, sprinkled with anecdotal references from his own agency world, devoted to helping people understand their own purpose in both work and life,

When I ask Roy the difference in his life purpose and work purpose, he answers with zeal, “Whether it’s the Red Cross or John Deere, those are companies that you don’t have to say, ‘I’ll have a purpose on the weekend, but I have a job during the week.’ And I think the difference is when you have a job, you make only money. When you have work to do, you also make a difference.”

He’s also known to quote poets and politicians and his office is lined with every sort of business philosophy book you can imagine. As he likes to quote Robert Kennedy, “‘What can be instead of what is.’”

Part of Spence’s journey is becoming what can be, as he has taken to the road—literally. And not just for his book tour. He’s walking across America, large chunks at a time. Why? He finally got fed up with the bad news he was seeing. On this journey he is taking a photo of, as well as experiencing, something good every single mile.

“I’ve already walked 500 miles from New York, doing about 18 miles a day,” Spence shares. “So here’s what I found out about this spiritual journey: Robert Frost is right. There are two roads that diverge in that yellow wood… and you cannot travel both. You can only be one traveler. And I’ve tried to travel both.”

When asked who his ideal dinner guests would be at his dream dinner party, you can imagine it wasn’t a cozy group along with his family. Here’s who he chose.

11. Red McCombs - he told me to put the creed into deed and that nothing is impossible if it is important enough.