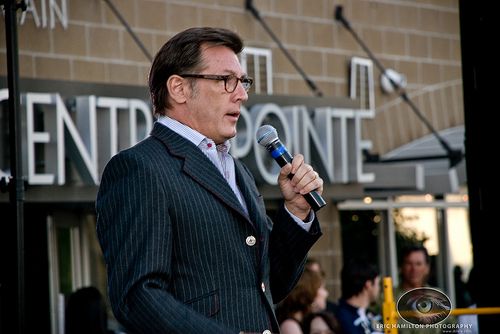 When it comes to The Beautiful People, Texan-turned-New Yorker-turned Texan Neal Hamil has an eye for true talent. As the former director of Elite North America, the most prestigious agency that supermodels call home, his job defined the standard of model beauty for the rest of the planet to enjoy. Tough job? You bet it is. In an exclusive to us, Hamil reveals the inner workings of the business of supermodeldom to determine who’s got The Look and why.

At dinner with Neal Hamil recently at the scene-stealing Mr. Chow in Manhattan’s Sutton Place, the model mogul has just had a tough week battling the beauties and the beasts. At a corner booth, we are seated in between the tables occupied by “Sex and the City” star Kristen Davis on one side and on the other, journalist Michael Gross, who coincidentally, wrote the 1996 book, Model, a tell-all about the modeling industry. It’s the story Hamil knows well, as he has lived in this realm for his entire career.

Beginning his career in front of the camera as a model, he eventually started, then sold, the eponymous Neal Hamil Agency, joined and ran the Ford Agency, then after a brief sojourn in Houston, he is back in the saddle, behind the reigns of Elite, and the world has never looked so gorgeous. “There was a time, when Neal was 25 when he was always considered to be the most beautiful man in any room,” shares Becca Cason Thrash, Houston philanthropist and Hamil’s longtime friend.

Hamil, a native Houstonian who has retained those model good looks, has lived a charmed life in New York. He’s even had cameo appearances on Tyra Banks’ “Top Model” series on the CW Network and has guested on NBC’s “The Today Show” on such topics as racism in the modeling industry. Still, representing the most stunning creatures is all in a day’s work for Hamil.

“I have had the best job on earth,” Hamil states emphatically as appetizers are served. “I love what I do. It’s such a fun business, always challenging and of course, every day is different. There’s never a dull moment.” Hamil is the kind of guy who jumps on a plane, ready to sign the next big thing in the form of a goddess who can transform the way we all view beauty. His quest is not without its perks. “I have had meals with Nelson Mandela at the Presidential Palace in Cape Town and have met the most famous and fascinating people everywhere,” Hamil reveals.

As we dine on the spicy entrées, the restaurant begins buzzing at a higher pitch and Hamil shares his global experiences, relaying a story that happened recently. “I’m on the plane all the time. Looking for the It girl, you know?” divulges Hamil. “And, what happens but a girl named Emma Beam walks off the elevator with her father asking if she can drop off her picture.” I nearly fell out of my chair when I saw her. I immediately thought, ‘she has it.’ We signed her on the spot.”

So, even with all Hamil’s world travels, sometimes the best finds can fall right on the front doorstep of Elite on Park Avenue South. What sounds like a Hollywood Cinderella story can be an exhilarating reality. “The United States of America has the most beautiful girls,” Hamil opines. “We are ushering in the return of The American Beauty. Second to the U.S., it’s Brazil, Australia, Canada, the Czech Republic, and now, China. And yes, I go to all of those places regularly.”

“I know it when I see it, but still that’s just one-quarter of the whole equation,” Hamil comments when asked how he discovers The Look. “A top model needs personality, an agency that believes in her (or him) and even a great deal of luck.” The Look the world seeks is transforming, according to Hamil. “It’s all transitioning from robotic, super-thin, and being expressionless on the runway,” states Hamil. “It’s moving toward a healthier, friendlier, more glamorous beauty, again—with personality. It’s day-break on the return of the supermodels and because Elite has more of them as clients than most agencies, I am eager for high-noon.”

Hamil has worked with nearly every supermodel of the last great model era, the 90s, including Naomi Campbell, Christie Brinkley, Stephanie Seymour, Veronica Webb and many more. He has the stories about them all, but his sense of propriety constrains him from revealing all the secrets yet. He’s likely saving that for a book that will definitely be a page-turner. When asked about the stereotypical IQ of a model. Hamil is quick to contend, “Yes, I have managed some people who will never win a Nobel Prize, but that’s most of us, right? Veronica Webb is one of the most delightfully intelligent people I know. She’s a brainiac and represents how much I love smart people.”

Hamil is still in the thick of the bold and the beautiful, running the agency instead of making time for inking tomes. One moment that encompasses his hard work occurred recently while Lydia Hearst was presented with the “Supermodel of the Year” Award at the Michael Awards, which showcases and honors the best and brightest of the fashion industry. “She accepted it and dedicated it to me because she said I changed her life,” shares Hamil, deeply affected by her generosity. “I love Lydia; we’re very close friends and the fact that she is dating a Texan is a lovely tribute to how I have represented my beloved Texans, and I do so dearly loveTexas.”

Hearst is not a Texan, yet Hamil reveals why he believes some of the most beautiful women on the planet are Texans. “It’s all that sunshine, bluebonnets, and big sky,” he quips. “Then there’s the Tex-Mex food and margaritas mixed with friendliness, fearlessness, and real beauty. Also, most of the model agents in Texas are very good and highly respected—people such as Page Parkes, Lisa Dawson, and Dan Hollinger. I like to think I have played some small role in creating that perception.”

As dessert graces our table, Hamil is candid about the mechanics of the business and how relationship-based it really is. “I have only had a very few bad moments, but everyone with whom any challenges have happened has apologized and made it up to me,” he explains. “So we are all still friends to this day with a single exception and it is too painful to discuss in detail,” he discloses. “I got really upset when a client I was negotiating a contract for a million dollars ran into the designer and instead accepted $25,000 and did the job. So, I fired her as a client even though she is one of the most famous women in the world.” Hamil has a zero tolerance policy for unethical behavior. “Stand for something or you’ll fall for anything, which is why I keep the fashion business at arm’s length,” he asserts. “It’s a job. It’s business. Yes, I have been hurt and burned and done wrong and disappointed and all, but I have learned and have found greater happiness because of it.”