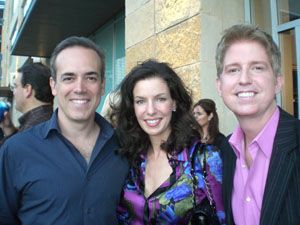 EDU-TAINMENT I found myself paying little attention to what the president was saying when he had a news conference to comment on North Korea's alleged nuclear testing. Instead, I was riveted by the fact that there was a row of books on the White House mantle below the Gilbert Stuart portrait of George Washington. I strained my eyes trying to see what the titles were; did Dubya enjoy Valley of the Dolls perhaps? Or maybe Men Are From Mars, Women Are From Venus? I moved closer to the television and am almost sure I saw Nuc-u-lar War for Dummies, Malapropisms for a Modern Age, and How to Win Friends and Decimate Countries.

ALLEY-CATTING On Friday, Oct. 6, Blue Lapis Light held its first-ever gala to celebrate the reprise of choreographer Sally Jacques' work, Requiem. The gala was fresh, fun, and successful, but Requiem was breathtaking. No, it was incredible – visually stunning, technically jaw-dropping, and unbelievably moving. And the best part is that it's running for three more weekends. This is a must-see event: If you haven't heard about it, just take my word and go see it. Info is at www.bluelapislight.org… I saw the Austin Film Society's preview of Infamous – and yes, Philip Seymour Hoffman was fabulous as Capote in the film Capote, but Toby Jones in Infamous will make you forget all about that other Truman portrayal. Rife with Austin actors and crew, it is another must-see… Zach Scott's Wilde Party for their production of The Rocky Horror Show was a gay who's who of Austin. Sponsored by the Human Rights Campaign, it was the perfect crowd to celebrate director Dave Steakley's fabulously riotous production with its fresh approach and pop-culture references. The legendary Joe York returns to Austin as the sweet transvestite doctor, and all of Austin should see this. It's just a jump to the left… The chic new home-décor store Area was inaugurated with a happenin' party by Lance Morgan, and much of the well-heeled crowd then reconvened at KLRU's block party across the street. Maury Sullivan and KLRU's fantastic crew put on a kickass party that won't be forgotten anytime soon…

DOING THE BELMONT Walking into the "Best of Austin" award-winning Belmont with the Long Center's Cliff Redd, I quickly adjusted to the dim interiors, so there was no need to remove my ever-present sunglasses. The tufted green leather, dark wood with burnished accents, filtered light, and Dusty Springfield singing "The Look of Love" made me suddenly feel like Angie Dickinson wearing a tight, beaded cocktail sheath, on the arm of Peter Lawford, circa 1962. I wanted to samba across the floor while sipping on the Belmont's deadly mai tais. Brought to us by Matt Luckie and Daryl Kunik who, like twin alchemists, can turn junk metal into gold (Lucky Lounge, Uchi, Mercury Hall, Betsy's Bar, Hi-Lo, Red Fez, and the Lavaca Street Bar), the Belmont is just about the chicest place to go in town right now. The main dining room and bar are comfortable, clubby, and the place to be seen. If this is the room where the Rat Pack would take their wives, then the hidden, intimate Dakota Room, with its smoky mirrors, is where the Rat Pack would take their mistresses. That's not to overlook the chinoiserie of the Imperial Room or the golden glow of the Carlyle Room ("Best of Austin" award-winning interior designer Joel Mozersky had a field day here, confiding to me that one of the influences was that he wanted to design a place that looked like a club that Tony Polar from Valley of the Dolls would sing in). He achieved that desired look beautifully, with a quiet campiness that's so subtle you might have to look twice. The patio, crowned by the lush Palm Terrace, is for lingering away over a few Belmontinis and the view of pretty people and the downtown cityscape. With a little work, the Belmont has every opportunity to become a legendary dining establishment in Austin.

REMEMBER Vote for Proposition 4, and register your support at www.imfor4.com.

THE BIG DATE Saturday, Oct. 21, 6pm on the tented grounds of the future Austin Museum of Art at 401 W. Fourth at Guadalupe, Tomás Estebes and Riley Estebes de Silva of St. Thomas Boutique present the sixth annual A Look for Love Couture Fashion Show and Black-Tie Gala benefiting the Austin Museum of Art's future expansion and educational programs. This year's show has Zac Posen in attendance showing his spring 2007 collection. The annual shows St. Thomas puts on are the most glamorous fashion shows to hit Austin, bar none. Go to www.alookforlove.org for further info.