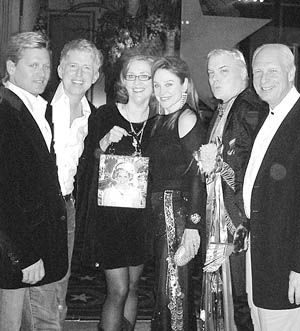 There is a salesperson by the name of Cynthia Harris at Last Call. The. Best. Sales. Help. EVAH! I told her that. I told her boss that. And now I'm telling you. Insist upon Cynthia when you are shopping for cut-rate couture… And to the left of Last Call, at Brodie Oaks, is a little place called Second Looks. It's a consignment shop for gently used high-end menswear. The brainchild of John and Debbie Harris (there's also a store on Mesa Drive and one in San Antonio as well), Second Looks is a lifesaver for those on a budget, those with fluctuating waistlines, and those who just love a great bargain.

ALLEYCATTING I went to hear my friend Jacinta sing and play the piano at Romeo's on Barton Springs Road. I've always kind of avoided the restaurants over there; they seemed so … so Jenna Bush. But one meal at Romeo's, and I'm a complete convert. Great food, great patio, and Jacinta provides great entertainment. From the girl whose dance music is so electrifying, who'd have thought she'd do such gorgeous ballads? This Australian beauty plays every Tuesday and Thursday night at Romeo's, and every Wednesday night at Chez Zee, and you can see her Web site and buy her CD at www.chunkymusic.com… Also wound up at Rocco's Grill (owner/chef Rocky Piazza dishes up divine Italian food and rules his restaurant with jaunty charm and a big heart) to hear Michael Clay and his band perform. Real star quality there. He's just the whole package: looks, style, and an excellent performer and songwriter. Catch up with him at Rocco's rooftop on Thursday and at Charlie's on Sunday evenings, and buy his CD at www.michaelclay.org.

FOR ART'S SAKE It was another one of those nights when Social Dragonflies ruled the earth. I'd have to say the Arthouse Texas Prize Party, with its theme of Texas Excess, was everything its name implied it would be. The Arthouse isn't one of those organizations that just praises art; it makes sure that the artists can support themselves to continue making art. And to award the $30,000 prize to artist Eileen Maxson, the Arthouse threw a party to just about end all parties. Even Houston's Queen of Society, Becca Cason Thrash, said that this party raised the bar for all Texas parties. I'm sure Dallas would disagree, but who cares? It's Dallas for crissakes. If we cared about what they thought, we'd live there. But we don't. We live in Austin, and to me, Austin is the center of the universe. I love these parties best because I love women: beautiful women, smart women, talented women, women who make things happen. Julia Null Smith, wife of Texas Monthly's Evan Smith, is one of the women I look forward to seeing most at these events. Now, Evan is a real sweetheart (and he'll hate me for revealing that to you), but Mme. Smith is one of the most thoroughly grounded, wryest, and wittiest women I know. She is totally her own woman, marching to no one else's drum, and those are qualities I admire most. Carla McDonald is another of those women – so self-possessed and self-assured that even if she weren't already drop-dead gorgeous, she'd knock your socks off with sheer personality and magnetism. Deborah Green? Forget it. This woman shows 'em all how it's supposed to be done, succeeds brilliantly, and cares not what anyone else thinks. Meeting Mme. Thrash was probably the highlight of my entire social season (she talked about going to a private concert by Elton John last week where she sat in between Karl Lagerfeld and Tom Ford – so smitten was she by the two designers that when someone asked her how Elton's concert was, she replied. "Elton who?"). And I swooned to meet the divine Sarah Bird, novelist extraordinaire. It took the resuscitative qualities of Sarah along with Michael Barnes to remind me that there was more to life than jewelry and couture.

LIGHTNING ROUND Saturday night: Chez Nous with Mark Sullivan – steak au poivre to die for; Red Cross fashion show, Threads. Keepers keeps looking better and better, but Giada? Well, just ask the girls at Estilo who were supposed to have been showing alongside them. Jacinta's CD Release Party at Latitude 30. Jacinta was great; Latitude 30's music ("Living on a Prayer" and "Sweet Child of Mine") was reprehensible. Their cocktails were even worse – so weak that even when we asked for additional alcohol to be added, we still couldn't taste it. Really grim. On to Oilcan's – yes, I had the nerve to return. Was greeted warmly by many, and loved seeing my old friend Bobby Cook from the days of the Boyz Cellar. Onto Rain, where I latched onto DJ Bang for the rest of the night, while bartender Scotty made the best drinks and Filthy Rich played the best music. Dancing and sweating so hard I looked like Lindsay Lohan before a drug test. We ended the night at Karma on Eighth & Colorado. Haven't been there yet? Bay-bee, is this place to die for! Soon to celebrate Karma's first anniversary, owner Suzette Christensen has the best-kept secret in Austin (though the Foodies ladies have been all over it for months). With DJs Jason Jenkins, Toddy B, Buckley, and Filthy Rich, Karma's the place to really let your hair down.

GO OR DIE Sunday, Nov. 13, is the Stitch fashion show at Emo's, showcasing 20 local designers and 70 crafters in a splashy show and craft fair. Shopping from 7-9pm, show at 10:30pm. Tix are $8 at the door, or at www.stitchaustin.com or www.emosaustin.com.