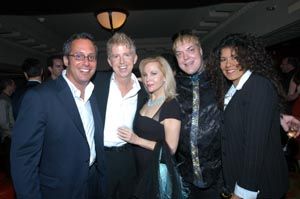 THE SOCIAL CIRCUIT Omigod, I've just had the most glamorous 24 hours of my life! So impossibly glam, I can hardly stand myself. You'll probably raise an objection, too, but for now, let's just snuggle up under my ermine lap robe and enjoy some delicious dish. Lance Morgan and Phil Hudson, publishers of Brilliant, invited me to a party they were throwing in Houston for their recent cover girl, Carolyn Farb. Well, you know how I feel about Carolyn: I think she's a goddess. Others can smirk, but I care not. I'm deeply impressed to know her. My frequent walker Mark Sullivan said, "I'll make you an offer you can't refuse; come down to Houston, and I'll put you up in my penthouse at the Four Seasons." Well! How could I refuse? Then, the lovely e-mail arrived from Carolyn (she who loathes e-mail), asking me to come down as well. I called Carolyn the next day, and when she asked if I'd like to come to her house, I swooned. Yes, indeedy, I would. My frequent consort Rita Garza happened to have a meeting in Houston that day, so I invited her to accompany me to the party, and invited myself to ride down in her brand new 350Z. We arrived late on Tuesday at Mark's place, and it was heavenly – spacious and exquisitely appointed, with sweeping views to die for. He was the perfect host, and we stayed up and gossiped until all hours. After asking Carolyn's permission the next morning, I begged Mark to accompany me, afraid I might disgrace myself by passing out (or worse). Carolyn's River Oaks home is not especially grandiose from the outside, but it is a 1930s John Staub structure that had been redone in the Eighties, and the overwhelming quality from the outside is privacy. But inside? It's like an art museum where no alarms go off if you touch the art. The furnishings become inconsequential next to the breathtaking displays of art that trail everywhere, from the garage, through both floors of the house, across the patio, around the pool, and into the pool house. Mark and I were giddy to stand in front of Frida Kahlos, Jasper Johnses, Warhols, Rousseaus – a staggering personal collection that perfectly described its owner. The full-length Aaron Schickler portrait of Carolyn hanging in the circular stairwell was among the many incredible portraits of her. When she suggested lunch at the Grotto, a high-society watering hole, we eagerly agreed (I rode with Carolyn in her to-die-for Aston Martin convertible). We were immediately seated at the center table, and the parade of society babes winding its way through the restaurant was straight out of Dynasty. Carolyn identified them for us, giving us brief background info on them: "She's number one on the best-dressed list," (I also met No. 2 later that night) or, "She used to be a newscaster," and Mark and I lapped it up. Suddenly I realized it wasn't Dynasty, it was the La Cote Basque section of Truman Capote's Answered Prayers – and I swooned all over again. Carolyn is not only witty and engaging, but she's as shrewd and clever as she is beautiful and gracious – and she behaved with far better manners than any of the pretenders to her throne who were present. We regretfully bade Carolyn goodbye and went on a whirlwind tour of Houston, after which we retired for a brief respite and then got ready for the party and made arrangements to meet Rita there. The party was at the drop-dead gorgeous new Hotel Icon – unquestionably the most chic hotel I've ever been in (www.hotelicon.com). Housing the Balance Day Spa; Jean-Georges Vongerichten's new restaurant, Bank; and the Whiskey, a Rande Gerber bar so plush I never wanted to leave, the rooms were magnificent, and I met the fab PR wizards behind the Icon magic, Gail Rubin and Stuart Rosenberg of Studio Communications, both riveting conversationalists and deeply talented. I intend to work hard to make them my NBFs (my Next Best Friends). Carolyn reigned over the entire affair wearing a dazzling suite of turquoise and diamond jewelry from the estate of Merle Oberon, and the chicest slice of the city turned out in force to pay homage. Vive la reine.

ALLEYCATTING Last Saturday night was a social-climber's wet dream – thank god I was wearing Depends under my new black suede jeans. My date, Rita Garza, and I started our night at Brilliant magazine's fab little soiree at Oslo, for their Little Black Book (in honor of Mark Sullivan's cover story by the same name). Oslo absolutely rules as the coolest, newest club around, and was the perfect setting for the handpicked crowd. Owner Matt Lucky graciously introduced himself to me at the door; he is a very nice and very successful gentleman who happens to co-own a string of stylish clubs. Rita and I greeted our hosts, Brilliant publishers Phil Hudson and Lance Morgan; grabbed a couple of cosmopolitans; and made a beeline for the Shag Room in back – a den of iniquity upholstered with brown shag carpeting. It was from there, with dim lighting and sunglasses, that I held court for the rest of the time. The ever-changing cast of characters included the delightful Mark Sullivan and his beau. I spent most of my time glued to the side of Katy Gaffney, who is in charge of the Lucky Star Auction for the Texas Film Hall of Fame that I'm helping with. She was there with her beau, the charming Robert Walker, board member of the Austin Film Society, which produces TFHOF, so there was lots of chatter about that. Also in attendance were Award Modern's (n/e UpCountry) Andrew Ward, and Paul Bradshaw (who is on so many boards of directors I can't even begin to mention them). Regarding his listing as a "power single" in the Little Black Book, Paul said, "I've never been honored before for not getting laid." We did miss seeing Joel Mozersky, who designed Oslo's interiors. So we hopped in the limo (graciously provided by a friend of Mark Sullivan's), and went to his party, the ArtErotica Ball. ArtErotica was once again held at the Blue Genie studios, which were transformed into a fantasyland of fishnet and hot pink. The art donations were dazzling, with creations ranging from implicit to explicit; the shirtless waiters bearing trays of drinks added decoration of their own. The erotic desserts created by 2 Dine 4 were a highlight of the evening, arriving like Cleopatra on a litter borne on the shoulders of the waiters. A mad dash at 11:30pm for last-minute bids gave every reason to believe that the event would beat last year's total of $16,000. Afterward, the limo loaded up our merry band of marauders and deposited us at the lovely home of a publicity-shy beauty who shall remain nameless. This party was distinctly more intimate, and a lot of fun (thanks, Pat). I hung out with my dear friend Mark Ashby and By George's Scott Butler, Brandi Cowley, and her friend Vance. I had a deep conversation with Mark Sullivan's sister Lizzie on the patio – she must have put some kind of hex on me to get me talking like that. Thinking we had time for just one more party before sunrise, we piled into the limo, arriving at our destination to find no fewer than five police cars in attendance. We opted to drive right past, and I decided to call it a night, stumbling from the limo to my bed. After all, I'll need my beauty sleep, you know... My schedule is full with the upcoming