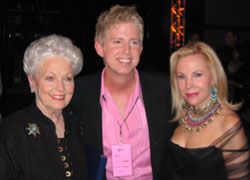 "This the only awards show where we guarantee that 'The Lord of the Rings' will not win anything," quipped Richards, with a wry grin reminiscent of her countenance years ago at the Democratic convention when she so wonderfully roasted the man who would later succeed her as the governor of Texas. 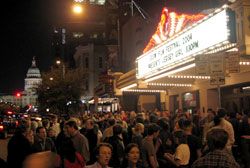 "Keep Austin Weird," exclaim t-shirts and bumper stickers here in the Texas capital, home of SXSW. The slogan underscores a pride in this city that has seen a burgeoning film scene blossom into an active place for movie production and film appreciation, spearheaded by groups like filmmaker Richard Linklater's Austin Film Society and The Austin Chronicle, the city's alternative weekly. While SXSW is known as a haven for music, the annual SXSW Film Conference and Festival has emerged as an important spring event. Organizers are already boasting about this year's installment, which welcomed large crowds this weekend, filling the 1,200 seat Paramount Theater and forcing planners to turn some would-be attendees away at the door.

On stage Saturday to introduce the popular local doc "Bush's Brain," about President George W. Bush's top strategist Karl Rove, film conference and festival producer Matt Dentler apologized for the nearly one hour delay caused by the overflow audience noting that this year SXSW is "growing out of our clothes a little bit." Meanwhile in the lobby, SXSW founders Louis Black and Roland Swenson, welcomed an array of industry execs to the showing (one of which ultimately ducked out of the screening, evidently tired of waiting). Everyone else seemed unfazed by the delay. Morgan Spurlock's "Super Size Me" seemed an even bigger draw later Saturday night with Spurlock lingering in the lobby throughout the showing and popping in to check on the raucous laughter and cheers that greeted the popular movie. During his Q & A, after catching the showing, Linklater and pal Ethan Hawke joined NY Times film critic Elvis Mitchell and Nicolette Aizenberg from the film's distributor IDP for a leisurely smoke and a chat on the sidealk outside the theater. Yesterday, large crowds returned for the world premiere of Paul Stekler's excellent Texas politics doc "Last Man Standing" and the U.S. debut of Kevin Smith's latest, "Jersey Girl." Enthusiastic crowds, a laid back vibe, and an intimate setting were the first impressions for this SXSW virgin.

It's a good time for independent filmmakers who seeking paths for distributing their films agreed a panel of indie stalwarts gathered at the Austin Convention Center on Saturday. The group, including Sony Pictures Classics co-president Michael Barker, Newmarket Films' Bob Berney, Magnolia Pictures' Eamonn Bowles, Film Movement's Larry Meistrich, Cinetic Media's Micah Green, former United Artists president Bingham Ray and former film rep John Pierson joined moderator Dana Harris of Variety to talk about the state of independent film today during an SXSW Film Conference session dubbed, "Sets, Lies and Videotape: the Business of Being Independent." While there are a range of distribution companies out there today picking up movies, from Indiewood companies owned by the Hollywood studios to mini-majors and independently-owned distributors or even self-distribution options and a rising number of service deals, execs agreed that its still important to try to start a film's life in movie theaters.

Asked what film distribution needs today, Bingham Ray answered flatly, "Distribution needs what it has always needed and that is a steady supply, or at least a few, good films that can help drag into people consciousness other films that they would have missed." Continuing the founder of the former October Films added, "For me it starts theatrically. My passion and I think the passion of most of the people up here... is to get a movie in front of people in theaters." Concluding Ray reiterated, "Distributors needs good films, or distribution needs films that the distributors themselves really believe in and get passionate (about)."

"This moment is probably one of the most exciting moments to make a film and have a new film out there in the marketplace," explained Sony's Barker, "The fact of the matter is that there are all sorts of new opportunities to get these pictures out -- there seem to be more options now." Continuing he added, "There are more revenue opportunities worldwide than there used to be for smaller, independent pictures." Barker added that in a moment of crisis such as this one, the types of films that are succeeding are sometimes surprising. Noting the grosses of Clint Eastwood's "Mystic River," Barker said, "I don't know if that movie would have done 100 million dollars years ago."

Continuing Barker explained that the success of Mel Gibson's "The Passion of the Christ" is worth examining as well. Of course, Saturday's session included a discussion of the Gibson film that has now earned an estimated $264 million after three weekends in wide release across the country.

"Every now and then a film unleashes an audience that doesn't get films for (themselves), its not the frequent moviegoers that are going," offered Eamonn Bowles, predicting, "I guarantee (that) you will see a spate of religious themed films coming out." Bob Berney predicted that the film would end up being on of the four of five top movies of all time. Asked by Variety's Harris whether other companies were skittish to take on the movie, Sony's Barker said that he tracked the movie but was never offered a chance to view it. "From my perspective, it was made, from the very beginning, from a very independent, maverick point of view -- where they ended up [at Newmarket] was where they wanted to be." Later as the discussion turned to DVD, John Pierson predicted, "Its going to be the biggest DVD release in history Bob, so get ready." Smiling, Berney answered, "We're ready."

Larry Meistrich, founder of the former indie company The Shooting Gallery, touted the increasing importance of DVD, citing his young company Film Movement. The outfit offers subscribers a movie on DVD each month by mail, aiming mostly at those who can't make it to the art-house for logistical or economic reasons. But when challenged by fellow panelists, Meistrich admitted that having a theatrical outlet is still crucial. "You can't deny the fact that if your theatrical profile is high, that drives the revenues through the roof," stated Michael Barker. Meistrich concurred and indicated that his company is booking his films in theaters to gain word of mouth and reviews from top critics in the biggest 15 to 20 markets.

Asked about the viability of his company by an audience member, Meistrich said that the outfit is in solid shape, but he continued a policy of not disclosing the number of subscribers who have signed up for the service. Explaining that his outfit is well financed, Meistrich said that he has subscribers in every state and some 2,000 cities, with subscriptions driving the revenues for his operations. He also cited a 70% renewal rate for the service. The top titles so far have included "Manito" and "OT: Our Town," Meistrich explained.

Speaking to the issue of how savvy filmmakers are today with regard to film distribution, Cinetic's Green said that unlike a few years back, producers and directors are more open-minded about their options. "These days almost no one has a particular company in mind (going into a festival or market), Micah Green said, "We go after the best deal -- it is often very difficult -- filmmakers really are entrepreneurial these days, they are taking risks.

"I am unhappy to hear that its such an uneven playing field," quipped Sony's Barker, after Green finished his point, " I have heard that from lawyers all my life, so I am not going to worry about it."

"This is a subjective business," emphasized Meistrich, founder of the defunct indie company The Shooting Gallery, later in the conversation, "It is not a good investment ever -- if you are doing this for the money you are going to lose your money. None of us are hear for the cash." Pierson jumped in countering, "Bob Berney always makes cash."