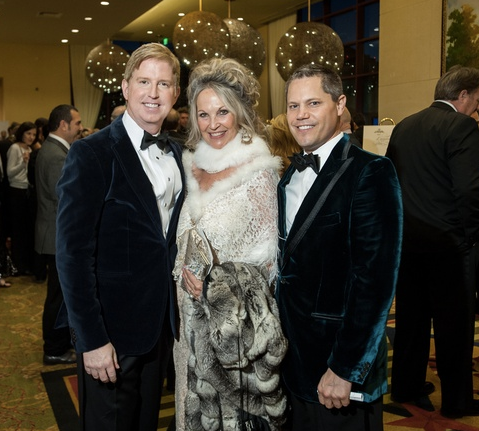 The Hilton Austin sparkled with sequins, bright baubles and the spirit of fun as the glam, generous guests for the night’s Dancing With the Stars benefit for Austin’s Center for Child Protection gathered there Sunday night.

As gala goers, among them Lance Avery Morgan, Gray Hawn, Eric Copper, Todd Dugas, Lorraine and Stan Jackson, Sheila Bostich, Jan and Mitchell Kalogridis, Amanda Pope, Ryann Danford, Erin Jolly and Danielle Kress, transitioned from the outside chill into the warm glow of the festivities and doffed their bundled outwear, the shiny, sparkly and stunning gowns of the winter party season were revealed in their glory.

They had come to enjoy themselves for a cause — and that, on both fronts, they did; at evening’s end, they had donated a record-setting $1 million-plus to the center.

Event chairs Alex Winkleman and Carol Adams, lovely in complementary blue gowns, greeted guests — including Katie Rooke, Roxanne Wilson, Mia Cavazos, Amanda Freche, Bryn Spee, Meredith Davis, Ryan Nail, Vilma Mazaite, Dana Tomlin and Dr. Tanuj and Nidhi Nakra — and circulated during the lively cocktail reception before the dinner hour, when the party moved into the ballroom and got down to the fun business of the evening.

A few brief words from emcee Sabrina Barker-Truscott were followed by a dance demo and a highly competitive live auction for prizes including an Aspen vacation package donated by Jamie Barshop and Tramex Travel; a Pamper Yourself package from Texas Ocuoplastic, Toccare Spa, By George and Nak Armstrong; a ride with a professional Formula One driver and related perks from Circuit of the Americas; and a celebrity dancer spot at 2014’s Dancing With the Stars event. A moving informational short film about the center and its important work and testimonials on behalf of some of the children served followed the auction.

The 10 pairs of dancers then proceeded to give it their all, leaving everything they had on the dance floor; the audience was treated to inventive takes on the tango, the cha-cha, hip-hop, the rhumba, salsa and some plain old move-bustin’ to the sounds of everyone from Adele to Vanilla Ice.

Though the competition was tough, but could only be one winning set of dancers at night’s end. By audience decision, Will Hardeman and Klaire Von Slyke swept it away with their Bond (James Bond)-inspired routine. Katie Jaffe and Matt Stewart came at first runner-up, and Jamie Barshop and Rowdy Dufrene took the second runner-up prize. Competition is always a good way to sweeten the proceedings, but it can truly be said that the everyone involved with the evening was a star, and the cause was the biggest winner of all.