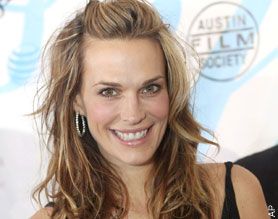 MOLLY Sims could use some etiquette lessons. Sources say the "Las Vegas" star showed up at the Austin Film Festival after-party at Pangaea Austin last weekend and demanded guests be booted to create a VIP section for herself and 20 pals. She then told owner Michael Ault she wanted to be paid for appearing. "When Ault explained it was a benefit for the festival and he was not making any money himself, she proceeded to belittle him," a witness said. "Her group drank six bottles of Dom Perignon, a bottle of Maker's Mark and two bottles of vodka. The tab was $8,000 and had to be comped. The server got only a $100 tip after working overtime." Sims' rep told us: "None of this is true."