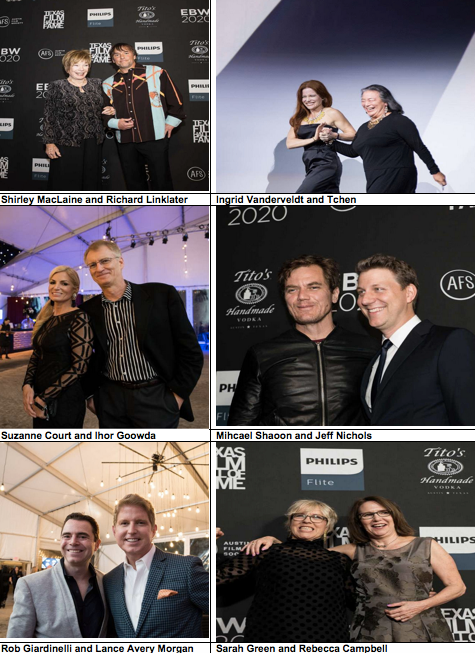 Shirley MacLaine thinks that the city of Austin should build a wall. Not necessarily to keep people out, but to protect the artists who live within the city limits from themselves.She pleaded her case before a sold-out crowd at the 17th annual Texas Film Awards.

"Art is probably man's attempt to preserve his imagination against time," she said upon receiving both the Star of Texas Award for the film "Terms of Endearment" and a lifetime achievement award presented by famed filmmaker Richard Linklater."Shirley, we consider you an honorary Texan," Linklater said of MacLaine's three highly acclaimed Texas-filmed projects. Memories of Fort Worth native Bill Paxton, who passed away last month, were another highlight of the gala which kicked off the South by Southwest 2017 Film, Interactive, and Music Festival on Thursday, March 9.

Rain wasn't in the fete's forecast, though in the end, the slight drizzle made little difference. Stars - from the small and big screens, stage, and more - shone big and bright inside the Austin Film Society's production studio number seven. Filmmaker Robert Rodriguez - a surprise guest for most event-goers - led a powerful tribute for Paxton, his friend and "great actor." Rodriguez introduced the video of Paxton's humorous acceptance speech upon being inducted into the Texas Film Hall of Fame a few years ago. "Being from Texas, it has its currency," Paxton says in the clip.Rodriguez and Paxton first met on the set of "Titanic" while Rodriguez was visiting his friend James "Jim" Cameron. "Bill worked hard at making it look easy," Rodriguez said. Emotional videos of Kevin Bacon and Tom Cruise sharing their favorite memories with Paxton streamed overhead during dinner service.

Co-chairs Suzanne Court and Lesya Milam entertained local notables including jewelry designer Kendra Scott. She and Ingrid Vanderbilt were spotted among those sipping on Tito's specialty cocktails in the black and white striped tent before the festivities began. The program ran exceedingly long. But that's to be expected with Nick Kroll, Michael Shannon, and former San Antonio mayor Henry Cisneros as presenters, right? After-party revelry continued late into the night. And, surely, over the upcoming week of SXSW, as well.