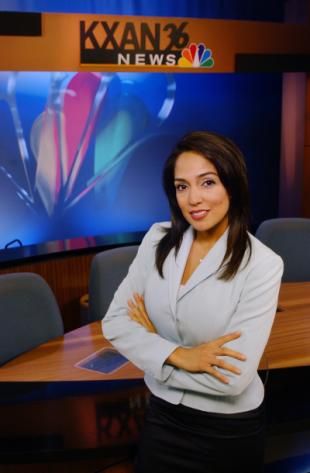 People who wrote the book on the literary and media scenes

Michelle Valles has become a local celebrity as co-anchor of KXAN's evening news. 'It is rewarding to be a good role model, especially with low-income kids,' says Valles, who started a $2,000 scholarship at her alma mater, Bel Air High School in El Paso.

The petite El Paso native with the blinding smile visits local schools, serves as mistress of ceremonies at charity events and volunteers with do-good groups all over Austin. Dear to her heart is the Muscular Dystrophy Association, which she has been involved with for seven years, hosting the Jerry Lewis Telethon in El Paso before taking over here.

"I wouldn't want to spend my Labor Day weekend doing anything else," says Valles, 30.

Valles also works with the American Heart Association, the American Diabetes Association and the Aguila Awards, which honor Hispanics in Texas. She's especially proud of a $2,000 scholarship she started for students at her alma mater, Bel Air High School in El Paso.

"I'm not looking for the highest GPA, and they don't have to be Hispanic," Valles says. "The only requirement is that they leave town for college. I want them to step outside their comfort zone."

Co-anchoring the news with Robert Hadlock gives Valles a degree of celebrity.

"It's a very strange power," she says. "You have to be careful and give the right message. But it is rewarding to be a good role model, especially with low-income kids. I tell them their disadvantages are advantages. When you've been given everything, you don't have that hunger for things to be better."

Valles comes from humble origins, too. Her father was a teacher who became an abusive alcoholic and left the family when Michelle was 9. Her mother went to work as a janitor.

Valles came to the University of Texas on a one-way plane ticket and worked at the Jalisco Bar to support herself. After graduating, she returned to El Paso and advanced from part-time reporter to weeknight anchor at the NBC station affiliate.

As for the future, Valles says she'd be "perfect on 'The View,' " but has no plans to leave Austin. She isn't longing for marriage and a family — and she feels guilty about that.

"I just don't know, but if I don't do those things, I better do something," she says. "So I really try to use my position to influence kids in a positive way."

'The Face of the Assassin'