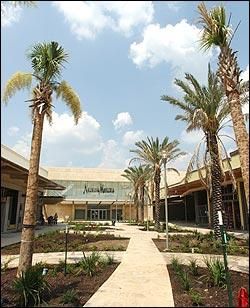 Hey, listen up, all you San Antonio style setters, followers and hangers-on counting the days to invade the 154-acre retail mecca, the Shops at La Cantera.

This fashion service announcement comes to you from Neiman Marcus and Nordstrom, stylish movers and shakers that hosted a crowd of curious, well-heeled fashionistas to dish about the Alamo city's style future.

Straight from their mouths to your eyes: Your voice — not to mention your money — dear customer, is what ultimately will matter to them. If you don't like the merchandise on Nordstrom's racks or would like to see more of a particular collection (Missoni, Burberry Prosum or Jack McCollough and Lazaro Hernandez of Proenza Shouler), ask a sales associate to point you toward Lisa Frandsen, Nordstrom store manager. Chat her up. She's vivacious, new to San Antonio — straight from Florida, where she helped open a Nordstrom there — and a newlywed. She also wants to know what you're thinking.

"Customers will tell us what we have done right and what we need to work on," she says.

Ditto at Neiman Marcus, where Vice President and general manager Thomas Wensinger, here only three months, believes that fashion — selling it, buying it, wearing it, understanding it — is about knowing what the shopper wants and expects from the luxury goods provider showcasing, among other brands, Louis Vuitton, Gucci, Prada and Ralph Lauren's Purple Label. Seek Wensinger out, too.

"The cool thing about fashion is that it always changes and the best thing that we can do is to educate the San Antonio woman, who already has great style, about that," Wensinger says diplomatically.

Nearly 100 women and men — all of them fashion-savvy and linked to the industry, whether working in it or just clotheshorses — turned out for the standing-room-only panel chitchat, many chicly coiffed, at Biga on the Banks. The group was hosted by the local Fashion Group International chapter, a nonprofit organization of professionals in the apparel, accessories, beauty and home industry.

While much was said about the importance of customer service, a cornerstone for maintaining loyal shoppers with deep pockets, the panelists also shared the significance — and value — in attracting Mexican nationals with even deeper pockets to La Cantera that will feature nearly 100 shops and department stores, including Dillard's and Foley's, when it opens Sept. 16, which, coincidentally is Mexico's national independence day.

Besides promotional events and sales and a vast array of new designers, San Antonians no longer need to trek outside the city to get their fashion fix, the crowd was told. "You don't have to go to Houston, Dallas or Chicago" to shop Neiman's, Wensinger says.

Frandsen says they won't have to head to Austin to shop Nordstrom. As for plus-size women, the store will have a plus-size department, Encore, and one for smaller women, Petite Focus. (Neiman Marcus, Wensinger says, will carry up to sizes 14 and 16 in many collections.)

But, because Nordstrom buyers are based in Dallas, they are in sync with what the San Antonio woman wants. "Our job is to understand that," Frandsen says.